Scientists in the Czech Republic have shown how a system combining photocaging, photorelease and phosphorylation reactions in the major groove of DNA can control gene transcription.1

In the natural world, a wide array of mechanisms direct gene expression: one common process is methylation and demethylation in the major groove of DNA. Michal Hocek from the Czech Academy of Sciences and his colleagues previously reported that the modification of pyrimidine nucleobases in a bacterial DNA sequence to include a hydroxymethyl group (producing 5-hydroxymethyluracil or 5-hydroxymethylcytosine) could increase the transcription of the sequence by up to 3.5 times compared to that of natural DNA.2

Fast-forward just over a year, and the group has now developed an artificial chemical switch capable of switching transcription on and off again, via reactions in the major groove of DNA – similar to the action of natural gene regulation. Importantly, the switch is bioorthogonal, meaning it can function alongside and not interfere with the natural biochemical actions of DNA. 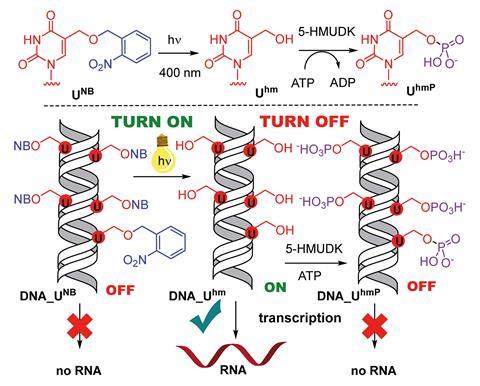 The group firstly produced bacterial DNA containing modified 5-hydroxymethyluracil (5-hmU) bases, as with their previous study, but this time they modified the 5-hmU bases with photoremovable nitrobenzyl protecting groups to prevent transcription. Irradiation by visible light at 400nm cleaved the protecting groups to switch transcription on, and enzymatic phosphorylation of the hydroxymethyl groups switched transcription back off, completing the off, on, off cycle. The team also investigated bacterial DNA modified with 5-hmC bases instead of 5-hmU bases, but although the system worked similarly for the first two steps, the 5-hmC-modified DNA failed to switch off again after enzymatic phosphorylation.

‘This is a very interesting study by the Hocek lab in which they demonstrate how chemical manipulation of nucleobase modifications in the promoter can cause changes in the transcriptional status of the gene in a bacterial context,’ says epigenetics expert Shankar Balasubramanian from the University of Cambridge, UK. ‘Chemically modified DNA bases are found in many organisms, including mammals, and so this study serves as a nice conceptual demonstration of how this strategy can be harnessed both naturally and also technologically to control transcriptional programmes.’

This transcription control has currently only been explored in vitro, so the first challenge for the group will be to achieve their switch in vivo. They also plan to investigate non-photochemical bioorthogonal reactions in the major groove of DNA for switching gene expression and red-light-activatable photocaging groups, ‘which would allow us to switch transcription using non-toxic and deeper-penetrating red light for applications in tissues or even animals’.