Seventy-five years after the first failed synthesis, heptacene has now been isolated by researchers in Germany and the US.1 The compound, which consists of seven linearly fused benzene rings, is the longest of the acenes ever made as a pure solid. Those who work on acenes say they could have applications in light emitting diodes or solar cells.

In 1942, German chemist Erich Clar claimed to have synthesised the two longest acenes: hexacene and heptacene. Unfortunately, it later turned out that he hadn’t made either, but rather the related non-linear hydrocarbons. In 2006, Douglas Neckers’ team was the first to unequivocally claim heptacene’s, and a year later hexacene’s, synthesis. However, both compounds needed to be stabilised in a polymer, which kept them from decomposing for only a few hours.2

‘It wasn’t clear if heptacene could exist outside of a stabilising matrix,’ Holger Bettinger from the University of Tübingen tells Chemistry World. To Bettinger’s own surprise, his team managed to isolate heptacene by simply heating its X-shaped dimers to 300°C for a few minutes. ‘We were thinking so much about the stability issues that we wouldn’t do the obvious for a long time,’ he says. Heat reverses heptacene’s dimerisation and releases the free compound, which can be stored at room temperature for several weeks. 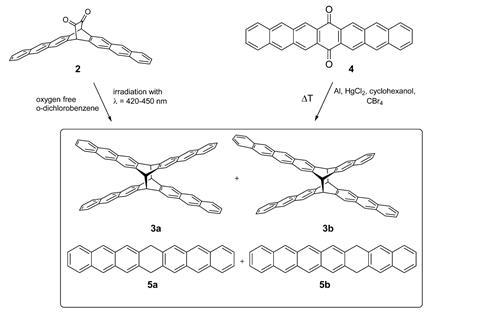 Although heptacene ‘looks like a perfectly nice aromatic molecule’, its polyradical character makes it unstable. ‘When you get to octacene, decacene, dodecacene you start to deal with the question: Is it a compound or is it just carbon?’ points out Neckers, who was not involved in the research.

Studying heptacene may allow researchers to extrapolate the properties of these longer acenes. ‘Acenes are models for very narrow graphene nanoribbons, but it is not clear what their properties would be, as nothing is known beyond nonacene,’ says Bettinger. ‘People have argued they might be metals, other say they might be semiconductors or even insulators.’

Bettinger has already tackled octacene and nonacene, but his team has so far only made them embedded in solid argon at –243.15°C.3 ‘We’re thinking about isolating these longer acenes, but it’s not clear if it would work,’ he says.

Like its shorter cousin pentacene, heptacene might increase solar cell light-capturing efficiency through a process called singlet fission: two molecules capture one quantum of light to create two pairs of charged carriers at the same time. Bettinger says that his team is ‘entertaining the thought of building a device with heptacene in it’, but believes that the compound’s instability might make this challenging. ‘You want to have devices that function not for weeks or months, but for years,’ he says.