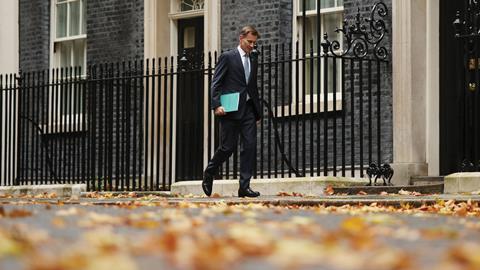 The UK government is maintaining its commitment to science and research with a promise to spend £20 billion on it in 2024–25. ‘This is the largest increase in R&D spend ever over a spending review period,’ the government said in its autumn statement, the first one delivered by Jeremy Hunt as chancellor.

‘[It’s] very good, particularly in the present circumstances,’ summarised Paul Nurse, director of the Francis Crick Institute. ‘There was a lot of concern that [the government] would go back on the commitment to go to £20 billion,’ says Kieron Flanagan, professor of science and technology policy at the University of Manchester. ‘We are pleased that the government has recognised UK science has a vital role to play in our economic recovery and the net zero transition,’ agreed the Royal Society of Chemistry’s head of policy and evidence Tanya Sheridan.

‘The thing that they’re not mentioning is that it was supposed to be increased to £22 billion,’ Flanagan points out. While £20 billion is indeed a cash increase of around a third compared with the current spending period, the larger figure has quietly disappeared from the budget. It had first been announced in March 2020 as a goal for 2024–25, which was then pushed back to 2026–27 in last year’s autumn statement. ‘So on the one hand, it is a significant boost; on the other hand, it’s less ambitious than what they were talking about 18 months ago,’ Flanagan says.

Reforms on R&D tax relief intended to reduce fraudulent practices have also been announced in the budget. However, they may turn out to be detrimental to small and medium-sized enterprises. ‘The chancellor and prime minister are threatening to pull the carpet out from under their feet by almost halving the value of R&D tax reliefs,’ said Steve Bates, head of the UK BioIndustry Association. Only a few weeks ago, new official statistics showed that small firm research investments had been largely underestimated. ‘SMEs are investing £16 billion more than previously thought in R&D,’ Bates pointed out.

The government further announced creating an investment zones programmes that aims to ‘catalyse a limited number of the highest potential knowledge-intensive growth clusters, including through leveraging local research strengths’. Although there aren’t any details yet, it seems to be highly selective clusters, says Flanagan, though ‘governments find it very difficult to stick to selective programmes’.

How exactly the spending boost translates into actual research output also remains an open question. ‘Not all of [the money] is in the science budget that is dispersed through the research councils and higher education funding agencies, some of that is money that’s spent by other government departments on their own research needs,’ explains Flanagan. If those departments need to make savings, research is often the first to be cut. ‘The other thing I’d be worried about is just the effects of inflation eating all this up.’

Overall, says Flanagan, any pledges that go beyond the next few years should be taken with a big pinch of salt. ‘A lot of the stuff in the autumn statement won’t happen the way this is spelled out because there will be different government – almost certainly so.’