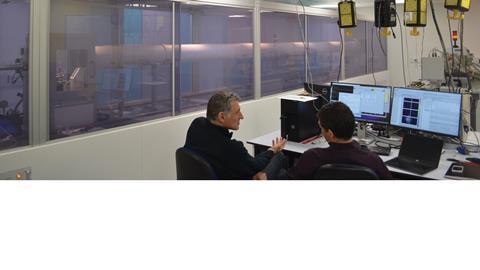 The Small lab set to produce big results in nano-research

The UK’s first analytical instrument to rely on liquid gallium as its x-ray source has been unveiled at a new University of Sheffield laboratory.

The £2 million soft matter analytical laboratory (Small) is intended to offer researchers an array of tools, including a small angle x-ray scattering (Saxs) suite, to study polymers and colloids. Saxs typically uses x-rays sourced from the collision between an electron beam and a solid metal target to probe a material’s structure.

But the solid targets often melt under intense exposure. The Small team has avoided this problem by using a liquid gallium target as part of their x-ray source. ‘Because gallium is liquid at room temperature, this problem is avoided … producing an x-ray beam that is up to 100 times brighter than our old instrument,’ said Oleksandr Mykhaylyk, Small’s manager, in a statement. ‘This means we can analyse samples within minutes, rather than several hours.’ Small’s Saxs instrument is capable of resolving structures on the atomic scale.

Philip Nelson, chief executive of the Engineering and Physical Sciences Research Council, which partly-funded Small, said the lab represents ‘an important step forward in the study of nanomaterials in the UK’.