Vaccines are notoriously fickle. Most formulations are stable between about 2°C and 8°C, but at other temperatures biological molecules inside them start to degrade, making them ineffective. 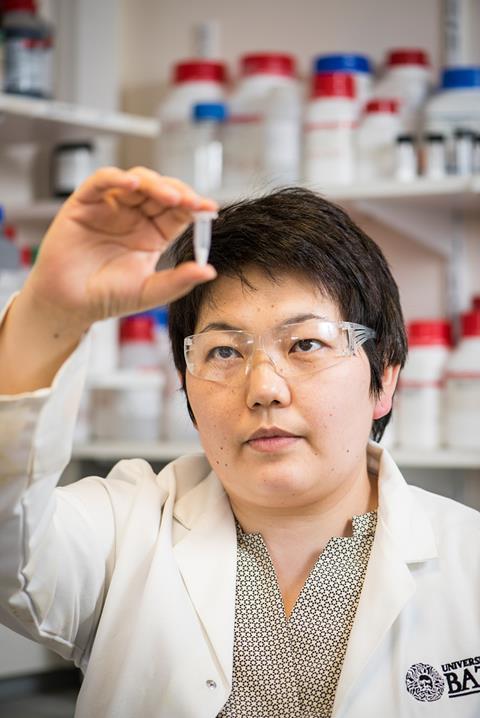 Long before Covid-19, cold chains were obstacles to vaccine distribution to remote, dangerous or poor places. As a result, millions of children around the world miss out on life-saving inoculations.

Asel Sartbaeva from the University of Bath, UK, became interested in vaccines after the birth of her daughter in 2010. ‘I started discovering how many children do not have access to vaccines because they can’t be delivered,’ she says. ‘The numbers I was digging out were horrific.’

A study from 2019 estimated that 25% of vaccine doses are degraded by the time they arrive at their destination. According to the World Health Organization, more than 19 million infants did not receive routine life-saving vaccinations in 2019.

Sartbaeva, who was researching silica materials at the University of Oxford, UK, in the early 2010s, decided to take action. ‘I thought, let’s see if I can apply silica to stabilise vaccines,’ she recalls.

It seems to be that the silica protects the protein

Backed by a Royal Society fellowship and some extra time during maternity leave, a side project began to take shape. Sartbaeva’s early funding applications were rejected and her idea initially faced scepticism from colleagues but, gradually, she found collaborators, hired students with experience working at vaccine companies, and gained financial backing through an alumni fund and personal donations from supporters who believed her idea had potential. The team’s first publication on ensilication came out in 2017.1

A decade on, Sartbaeva and her team at Bath have just been granted a US patent on ensilication, a method that is hailed as a pioneering way to stabilise lifesaving vaccines. Add to that, the team won the health category of the Royal Society of Chemistry’s Emerging Technologies Competition in 2020 and the biotechnology award at the IChemE Global Awards in 2017.

The technique for tailor-fitting a vaccine with a silica coat relies on the sol–gel process. A silica precursor, tetraethyl orthosilicate, is hydrolysed to form orthosilicic acid. Once broken down, the compound is mixed with a target protein, which acts as a catalyst that attracts the silica. The orthosilicic acid forms a network that grows into tight-fitting coat around the individual proteins. The protein–silica particles grow and aggregate into clusters and result in a protein-loaded silica powder, which can be collected and stored until needed.

‘Because we put a layer (of silica) around each protein we prevent them from unfolding,’ Sartbaeva explains. The ensilicated proteins are stable up to unusually high and low temperatures. The team has frozen the powder and heated it up to boiling point. ‘It seems to be that the silica protects the protein against all of that,’ Sartbaeva says.

In a study published last year,2 Sartbaeva’s team used ensilication to stabilise the tetanus toxin C fragment (TTCF), a component of the full tetanus neurotoxin present in the diphtheria, tetanus, and pertussis (DTP) vaccine. TTCF is a potent immunogen but is susceptible to problems in cold chain transportation.

Individual TTCF–silica nanoparticles formed and grew within seconds and, minutes later, the protein-containing nanoparticles formed the clusters that make up the dried powdered product. Sartbaeva’s team stored the powder for one month at room temperature and transported it without any specialised equipment.

After storage, the team tested their ensilicated vaccines in in vivo experiments with mice. It elicited the same immune response as native TTCF.

Independence from the cold chain

Sartbaeva estimates that ensilication can be used to extend the shelf life of vaccines for years, perhaps up to five, 10 or even 15 years. Their current experimental data goes up to four years. She hopes the technique will be adopted to store and transport pediatric vaccines to low-income countries, making them more widely available and, eventually, helping to eradicate vaccine-preventable diseases in places that are currently cut out of the cold chain.

The caveat to the method is that it might not work on all vaccines. So far, the team has tested it on 14 targets. One of them was very challenging to ensilicate. It is unclear what exactly determines whether the method would work for most vaccines or just some of them. But Sartbaeva is optimistic that the method can be applied widely and has plans to branch out to ensilicated antibodies and diagnostics devices. 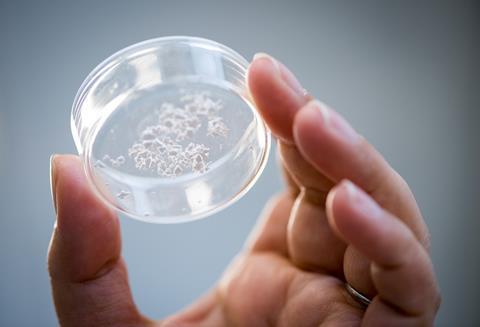 In ensilication, silica creates a strong network of covalent bonds around proteins to stop them from unravelling

The team is also looking into applying the technique to Covid-19 vaccines. They aim to connect with the Oxford–Astrazeneca vaccine group as this could be the easiest target for ensilication, due to its virus-based properties, as opposed to Pfizer’s and Moderna’s mRNA vaccines.

For now, ensilication is only beginning to inch towards commercialisation. The team is eyeing a spin-out from the University of Bath to bring the technology to market. Sartbaeva will stay in academia and help shape the company as an academic advisor, she says: ‘If a company is the easiest route for taking this forward, then that’s the way to go.’

Origin: Research project that began at the University of Oxford