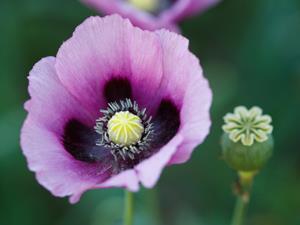 Genetically modified yeast can synthesise morphine and semisynthetic opioid pharmaceuticals, researchers in the US have shown. This could obviate the need to grow opium poppies, reducing security concerns and the resulting regulatory hurdles, as well as the costs of chemically synthesising some of the synthetic opioids.

The opium poppy is the source of a variety of pharmaceutical drugs such as the analgesic morphine, the cough medicine and painkiller codeine and the vasodilator papaverine. Several other pharmaceuticals can be chemically synthesised from poppy products too. But growing opium poppies is problematic because they’re used to produce heroin too. The International Narcotics Control Board has limited opium poppy growth to a few highly regulated areas such as Australia and Turkey, and a large proportion of the world’s opiates are grown on the Australian island of Tasmania, making the supply vulnerable to climate change and natural disasters such as floods.

In 2006, Jay Keasling and colleagues at the University of California, Berkeley, successfully used genetically modified yeast to synthesise artemisinic acid, a precursor chemical to artemisinin.1 This is a highly effective treatment for multi-drug resistant malaria that had previously been available only from Artemisia annua (sweet wormwood), limiting the supply and making artemisinin unaffordable for many malaria sufferers. Artemisinin derived from yeast is now produced commercially, supplementing the natural supply, although it has yet to significantly reduce the drug’s cost. Bioengineer Christina Smolke and colleagues at Stanford University in California are working towards a genetically modified strain of yeast to produce opiate compounds – a much more complex process than artemisinin synthesis. 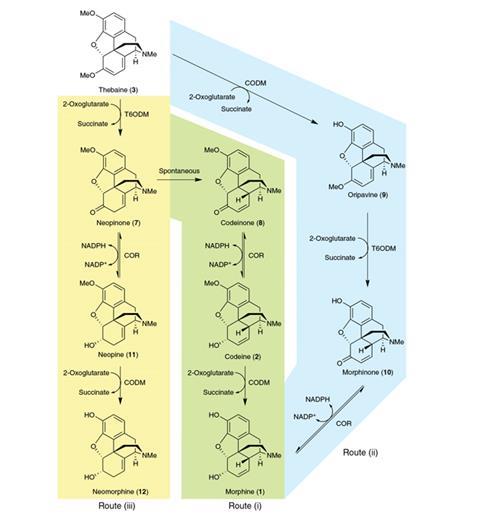 The yeast were engineered to produce a range of opioids

In 2008, Smolke and colleague Kristy Hawkins, then at California Institute of Technology in Pasadena, reported a strain that could perform some key early stages of the pathway.2 In the present paper, Smolke’s team focused on the final stages. The group engineered a strain of yeast expressing three key enzymes used by poppy plants to convert the opiate precursor thebaine to morphine. After culturing the engineered yeast with thebaine for four days, they detected morphine and codeine. In initial experiments, more than half the product comprised an unusual isomer of morphine called neomorphine, which is not known to have any pharmacological use, although to date it has not been tested. They devised a strategy to localise various stages of the reaction to specific organelles of the yeast, and this, together with optimisation of the yeast strain to express the ideal proportions of the three enzymes, allowed them to increase the specificity for morphine to 86%.

Next, the researchers modified the yeast to produce high-value semisynthetic opioids such as the painkiller hydromorphone, which is up to seven times more effective as a painkiller than morphine. Currently, these drugs have to be produced from natural opioids by expensive chemical processing. However, bacteria found growing on waste from a poppy processing plant had been found to contain enzymes that produce these compounds directly. The researchers, therefore, added these enzyme genes into the yeast, to increase its synthetic repertoire. Eventually, they produced three strains of yeast optimised for the production of morphine and hydromorphone, as well as two other semisynthetic opioids, hydrocodone and oxycodone. Using the strain optimised for morphine the yeast could produce 4.7mg/l of the drug, which the researchers concede is lower than they expected. The oxycodone strain performed better, synthesising 70mg/l of that drug.

The researchers are now working to design a single integrated strain of yeast that can express all the enzymes necessary to convert simple sugars all the way to morphine or other target molecules, as well as further optimising the strains to increase the overall yields of the target molecules. ‘From that point,’ says Smolke, ‘you’re talking about basically scale-up and fermentation optimisation.’

Biotechnologist Neil Bruce of the University of York cautions that the paper is a proof of concept, and that yields would have to be dramatically increased before the process could be commercialised. Nevertheless, he says, ‘it’s a really elegant piece of synthetic biology, combining plant and microbial enzymes to produce valuable synthetic derivatives of opiate drugs’.”