Researchers have imaged the zinc ‘spark’ – the release of zinc by a human egg into its surroundings as it is fertilised – for the first time. 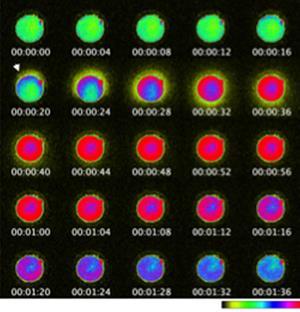 It has been known for some time that zinc is involved in embryonic development, and that being fertilised by a sperm causes an increase in calcium that causes the egg to expel zinc into its surroundings. But this is the first time the process has been visualised in human eggs.

A group led by Teresa Woodruff and Thomas O’Halloran at Northwestern University in the US injected eggs with a protein from sperm to simulate fertilisation and used a fluorescent probe called FluoZin-3 to track the movement of zinc. They observed a coordinated ‘spark’ of zinc that was fired out of the cell in response to the trigger of fertilisation. The amount of zinc present in the spark could be used to predict the egg’s ability to develop into an embryo, and the team say this could provide a non-invasive way to assess the health of IVF embryos before they are implanted.

The team also found that isolating the zinc from the fertilised egg’s components using a chelating agent, rather than expelling it from the egg, had a similar effect on the cell cycle. and suggest this could be a useful tool for activating eggs in future studies.