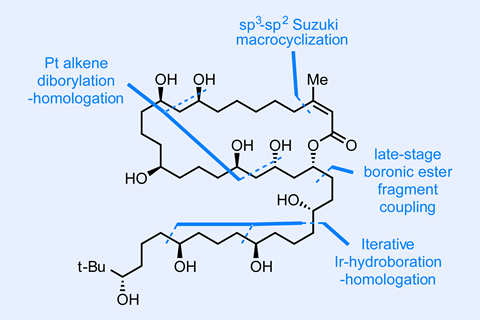 Variety – that’s one of the things I love about doing total synthesis. One day you could be using baker’s yeast, the next an air-sensitive molybdenum carbenoid or a retina-searing mercury lamp or a potentiostat. By the time I’d got my PhD I’d run just over 2000 reactions using dozens of metals and catalysts under a dizzying range of reaction conditions. I wasn’t exactly a master at anything (except maybe flash chromatography), but I’d run enough named reactions to fill a book.

By contrast, for all the time we spend marvelling at the beauty of complex natural products, nature actually has very few reactions at her disposal and runs everything under pretty much the same conditions. Although it’s not always obvious at first glance, even the most intricate natural products are built up from simple repeated monomers using just a handful of steps over and over again. For example, a macrolide like bastimolide B is typically assembled via the polyketide synthesis pathway using interactive condensations, decarboxylations, dehydrations and reductions – essentially all undergraduate chemistry – and a just dozen or so shots of the metabolic intermediate acetyl-CoA.

It can make sense, then, to mirror this approach and develop our own iterative methods for building up these natural products in the lab. But these typically come with a lot of filler – protecting group fettling and other non-strategic steps between interactions. In a recent report, a computer analysis suggested that preparing bastimolide B using known interactive homologations would take as many as 43 linear steps. I wouldn’t touch that PhD project!

However, Varinder Aggarwal’s group at the University of Bristol, UK, was able to reach the target in less than a third of that step count through the masterful use of modern boron chemistry.1

The kinds of 1,5-stereocentres found in the linear part of the molecule are particularly tough to synthesise (and even assign) as they’re too far apart to transmit stereochemical information. Existing interactive approaches to this motif require several steps to attach each new subunit, but the Aggarwal group homologation methodology is a perfect fit for recursively bolting on these groups (figure 1). If you’re wondering where you get enantiopure metallated triisopropylbenzoate (TIB) esters, you might be pleasantly surprised to learn that their preparation involves neither scarce sparteine nor toxic tin; they can be prepared by simply treating chiral sulfoxide precursors with a little turbo Grignard. I find it tough to visualise these 1,2-metallate rearrangements so I’ve coloured the new C–C bonds in blue. It might be worth referring back to previous Aggarwal publications if this still isn’t making sense!

For the preparation of the 1,3 stereodyads in the macrocyclic ring, the team uses a neat diborylation-homologation sequence to set the stereogenic centres (figure 2). First, a small amount of a chiral platinum catalyst adds bis(pinacolato)diboron (B2Pin2) across the double bond with excellent enantioselectivity. A reagent-controlled homologation is then carried out with another equivalent of metallated TIB ester. As you might expect, the configuration of the second stereocentre is determined by the TIB building block. As both enantiomers of this can be made, both syn and anti stereodyads can be prepared with essentially perfect diastereoselectivity just by switching out the reagent. Note that both new oxygen atoms come from peroxide – these reactions make good mechanistic problems!

Figure 2.  A diborylation-homologation approach to 1,3 diols

As expected, treating this tetraboronate with peroxide then converts into the polyol – in fact, all but one of the molecule’s 11 oxygen atoms are introduced this way. After protection and hydroboration, another boronic ester coupling is used to unite the two halves of the molecule and the target is finished in just 13 linear steps.

I think this is a really cool exposition of several methodologies that the Aggarwal group has been working on for a while now and the details of the individual reactions are very interesting – definitely worth a read.