May cause side effects

Every drug has side effects. That sounds ridiculously obvious, and perhaps it is. But it bears some thinking about, because it’s more properly expressed as ‘every substance that you put into your body has side effects’. An overdose of water can kill you – not by drowning, but rather by disturbing the blood’s electrolyte balance so much that your cardiac muscles and other organs stop functioning properly. If water has biological toxicity, so does everything. 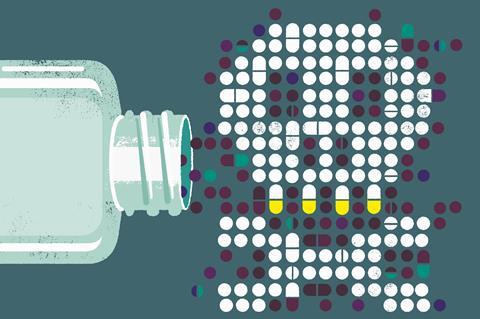 Every substance we put in our bodies will cause toxic effects at a high enough dose. The challenge with drugs is to balance that potential toxicity against beneficial effects

But mentioning that particular mechanism brings up the related question of where all those side effects come from. Chemists, toxicologists, and pharmacologists generally divide them up first into ‘on-target’ and ‘off-target’ effects. The first are, of course, built into the mechanism of the drug. If you overload a drug’s pharmacological target (a particular signaling pathway or enzyme’s activity) you can naturally set off trouble. And you’re not really going to be able to avoid that problem other than by making sure that you have a large gap between the therapeutic dose and the toxic one. That ‘therapeutic window’ is very large for water, and rather small for (say) insulin. Paracelsus was right: the dose makes the poison. The most common medicine with a relatively small window is almost certainly paracetamol, which can produce a dangerously toxic metabolite if taken in excess or with alcohol.

Some on-target effects can’t be avoided at all. Opioid drugs are unparalleled in their ability to relieve pain, but they are also nearly unparalleled in their risk for addiction. That effect is completely tied up with the opioid signaling pathways (as are other side effects such as constipation), and decades of searching for strong analgesic effects without the risk of physical dependency have, so far, come up short.

In drug discovery, we’re generally alert to the possibility of those on-target effects, since in most cases we and others have already been studying the drug target rather closely. But it’s the off-target side effects that keep you up at night when a compound first goes into testing. I’ve often said that if you aren’t nervous when a drug candidate first goes into toxicity testing or human dosing, then you haven’t been in the business long enough! Off-target effects are by definition unpredictable, because there are tens of thousands of biochemical pathways out there whose disruption you will never have been able to test beforehand. The only way to find out about those is to go into a living system. And while getting safely through a furry little living system like a rat is very good news, it is not a complete guarantee of safety in human patients, either.

There are other cases where we’re not sure if something is on-target or off-target, mainly because we might not understand the target as well as we would like (or as well as we thought). An example of this is rimonabant, a cannabinoid antagonist that was under development for obesity. The idea was that just as cannabis makes people hungry, cannabinoid blockers make people eat less. But while that was the case, in the clinical trials a small but statistically unignorable number of participants reported intrusive thoughts of suicide, of all things, and no one is quite sure, even now, what brought these on. This ended any hopes of approval as a weight-loss drug, understandably.

You will find most of this out in the clinical trials, if you’re lucky. If you’re not, you’ll only find out once the drug hits the market and is being taken by far more people than could ever be dosed in trials! The nightmare is a very-rare-but-very-severe side effect, and many of these (we believe) come down to immunology. Individual immune variation is the whole point of the adaptive immune system; we’re all different. That means that some people can have a sudden and possibly severe reaction to a substance that others find only inconvenient or even unnoticeable. Think of allergies to things like peanuts or bee stings – or to penicillin.

It is difficult-to-impossible to predict who might be at risk for which particular new drug, or how common that problem might turn out to be. As with efficacy, safety in humans can, in the end, only really be proven in humans, and both may turn out to be more complex than you had hoped.