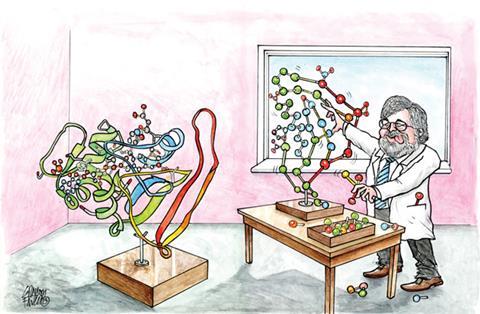 Organic chemists may not seem like a humble group. But we should be, because we are humiliated every hour of the day by what nature accomplishes through enzyme catalysis.

All those wildly complex natural products that eat up phalanxes of postdocs? They were synthesised by some organism in its spare time, under aqueous conditions, at whatever the local ambient temperature might have been. All those metabolites that the medicinal chemists and drug metabolism folks spend so much effort isolating and identifying? Made inside liver cells, as a small transient item on their agenda, and done in the same casual chainsawing manner that they greet almost everything we throw at them. And when we need larger amounts of these molecules, most of the time we have to let the cells do it for us again, because we can’t reliably make the compounds ourselves.

For a long time, we have quested to harness such powers. It’s tempting to think that enzymes could be designed to speed up a huge range of reactions – if anyone could reliably design enzymes, that is. We’re making progress on that front, but almost always through modifying an existing enzyme to do something new. It would be morale-boosting to report that we can step in and swap amino acid residues with confidence, but there’s invariably an element of chance involved. Work in this area acknowledges these limits by building in random mutations to look for unexpected improvements.

Enzymes could speed up a huge range of reactions – if anyone could reliably design them, that is

There have been some notable successes, such as Codexis and Merck & Co’s biocatalytic amination in the synthesis of diabetes drug sitagliptin. However, it’s hard to tell from the outside when, or if, Merck will use this process routinely. Overall, though, the field seems to be caught in something of a bind. Our understanding of dynamic protein structure isn’t good enough yet to let us design much from first principles, or to reliably predict what modifications might lead to the activity we want. And the number of possibilities in any such project is so huge that it strains both computational and biological resources (even accounting for the modelling improvements afforded by this year’s Nobel laureates). Add to that the significant disagreements about just how enzymes achieve some of their extraordinary rate increases, and you have a lot of uncertainties. If you really, really want a bespoke enzyme, you may be able to produce one if you have a very large pile of money and a lot of patience. Or perhaps not. This situation understandably cuts down on the number of people who are willing to make the attempt.

It also means that all-out efforts are only likely to be made when a good deal of money rides on the outcome, which makes industrial process chemistry the place to look for customers. The money is certainly there, but the patience might be another matter. But that brings up another factor: are the enzymes that make likely industrial targets too case-specific to help advance our understanding more generally? There may be general optimisation methods that could go on to be applied in many other programmes, or it may be that engineered enzymes will tend to pose unique problems. In that case, finding a new one could present similar levels of difficulty every time. A computer scientist would refer to this as finding out how algorithmically complex the problem is, and I don’t think anyone has a good answer just yet.

A billion years of evolution are apparently enough to solve problems like this pretty reliably, but that’s not much help on a human timescale. Reverse-engineering the resulting proteins is no easy task either – it can be very hard to tell what’s needed and what’s merely tolerated. So we’re either going to have to learn enough to model and predict such things (not very likely in the near term, in my opinion), or find some way to run directed-evolution processes more efficiently (shorter cycle times, more selection pressure etc). Without some progress on either of these fronts, the whole business might remain too much of a laboratory curiosity to make the impact that it could.