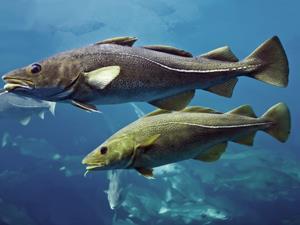 This week, something fishy is going on, with Helen Scales.

That was the question scientists began investigating in the 1950s. The hunt was on for some sort of antifreeze that would explain the fishes’ ability to thrive in subzero conditions. And it wasn’t until the 1960s that a molecule was found that fit the bill. It came from the blood of an Antarctic icefish, a common denizen of the Southern Ocean, and became known as antifreeze glycoprotein or AFGP.

The term AFGP is now applied to a group of molecules with similar structures that have since been found in a host of cold-water fish. Each AFGP has a backbone made up of the amino acids alanine and threonine, with two alanine residues for every threonine, and attached to the threonine is a disaccharide called beta-D-galactosyl (1,3)-alpha-N-acetyl-D-acetylgalactosamine. The sequence of amino acids varies slightly between different AFGPs as does their overall length. 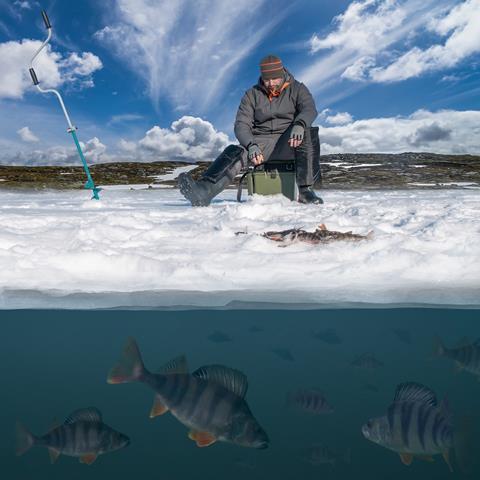 Antifreeze molecules are generally made by fish in their pancreas, oesophagus and stomach. Circulating in blood around the body, AFGPs stick to any ice crystals they encounter and stop them from growing bigger. This is crucial for fish living in icy waters, because large crystals soon start causing lethal damage, tearing living cells to shreds. Naked dragon fish have been found to exude a protective coat of antifreeze slime to prevent ice crystals building up that could rupture their skin.

To investigate the ultimate fate of ice crystals inside the body, Clive Evans from the University of Auckland, New Zealand led a team of researchers who synthesised fluorescent silica nanoparticles coated in AFGPs. Injecting them into fish, they saw these tethered particles become engulfed by phagocyte cells and stored out of harms way in the spleen, perhaps awaiting warmer conditions when the ice will melt.

Exactly how AFGPs work at the molecular level remains something of a mystery. Recent insight into this puzzle comes from studies of an antifreeze protein, known as Maxi, found in flatfish. Peter Davies and colleagues from Queen’s University in Ontario, Canada discovered that Maxi holds water molecules within its crystal structure, which consists of two alpha helices bent over like hairpins. It’s possible the trapped water could connect to a network of ice crystals by hydrogen bonding, thus allowing the protein to latch onto the ice and halt its growth.

Since their discovery in fish, antifreeze molecules have been found all across the living world from insects and diatoms, to trees, grasses, fungi and bacteria. Not all of these ice-suppressing molecules are proteins: an Alaskan beetle, Upis ceramboides, can survive at an astounding minus 60°C thanks to a lipid called xylomannan.

To produce these antifreezes, various species have co-opted existing genes. In Antarctic icefish, AFGP is made by an altered version of the gene that codes for the pancreatic enzyme trypsin. A small sequence change gave the protein ice-halting abilities, a transformation that took place around 5–15 million years ago when the Southern Ocean began to freeze over. Amazingly, an almost identical protein evolved independently in distantly related fish on the opposite side of the globe. There are just a few minor differences in the structure of the AFGPs made by Antarctic icefish and Arctic cod – a rare case of convergent evolution in proteins.

As well as the species that make them, AFGPs could soon benefit people too. They are being looked into as cryopreservation tools, to keep donor organs cold but undamaged by ice. And aeroplanes and overhead power lines could one day be painted in AFGPs to maintain their efficiency and stay ice-free when temperatures plummet.

And perhaps rather surprisingly, AFGPs are used to make ice cream; they don’t stop ice cream from freezing altogether but by preventing large ice crystals from building up, they apparently produce very smooth, delicious ice cream. However you won’t see AFGPs on ice cream labels: to make sure consumers don’t confuse this natural antifreeze with toxic ethylene glycol used in car de-icers, the food industry renamed them ice structuring proteins, which is something these molecules certainly do – even if no-one yet knows exactly how they do it.

Science writer Helen Scales there, with the cold-defying chemistry of AFGPs. Next week, you may have to look away…

You may recall the instruction of your teacher to ‘look away’ or ‘not to stare at the bright light’ or ‘put your hands over your eyes’. Then the piece of magnesium would be lowered into the Bunsen flame, and would soon ignite. You’d be looking away by now, but would be conscious of a blinding white light – which is why magnesium is used in signal flares.

Simon Cotton explains the chemistry behind this flash in next week’s Chemistry in its Element. Until then, thank you for listening, I’m Meera Senthilingam.