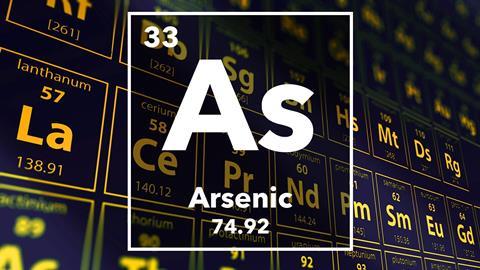 Bea Perks introduces a deadly poison that also finds use in paints, fireworks and medicine

This week, poisons in paint, fireworks and aphrodisiacs, Napoleon's wallpaper and the whiff of garlic, what's the link? Here is Bea Perks.

Mention arsenic to anyone even a chemist, the first word that is likely to come to mind is poison, it is of course a deadly poison, but its compounds also found or have been found in insecticides, colouring agents, wood preservatives, in animal feed, as a treatment for syphilis, and treatments for cancer, as a treatment for psoriasis, in fireworks and as a semiconductor. Oh! Just maybe as an aphrodisiac. 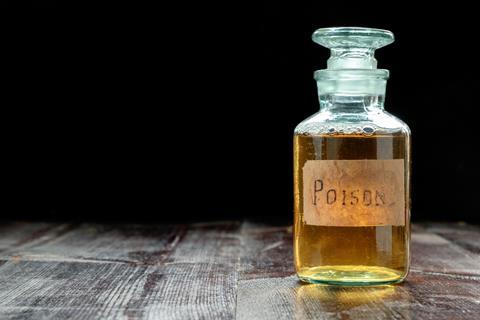 Arsenic, atomic number 33 lies in between phosphorus and antimony in group 15, the so called nitrogen group of the periodic table. Members of the group including of course nitrogen, along with arsenic, phosphorous, antimony and bismuth are particularly stable in compounds because they tend to form double or triple covalent bonds. The property also leads to toxicity particularly evident in phosphorus, antimony and most notoriously, arsenic. When they react with certain chemicals in the body they create strong free radicals that are not easily processed by the liver where they accumulate.

Arsenic is neither a metal nor a non-metal but instead joins a select but rather ill defined group of elements called the metalloids. These are found in the periodic table along a diagonal line from boron at the top left to round about polonium at the bottom right. Everything to the right of the line in the periodic table is a non-metal and everything to the left is a metal. The exact members of the group are open to debate but arsenic is always a member. Most metalloids occur in several forms or allotropes where one might seem metallic while another one seems non-metallic. carbon isn't a metalloid because despite the semiconductor properties of graphite all of its allotropes from graphite to diamond are non-metallic in character. 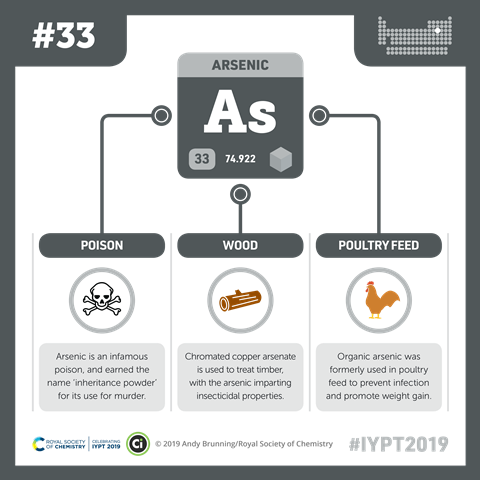 Arsenic gets its name from a Persian word for the yellow pigment now known as orpiment. For keen lexicographers apparently the Persian word in question Zarnikh was subsequently borrowed by the Greeks for their word arsenikon which means masculine or potent.

Orpiment or yellow arsenic trisulphide is a historical pigment identified in ancient Egyptian artefacts. On the pigment front they were hardly dare mentioned it, such a well worn tale, Napoleon's wallpaper just before his death is reported to have incorporated a so called Scheele's green which exuded an arsenic vapour when it got damp. All well and good except that Napoleon also suffered from stomach ulcers, gastric cancer, tuberculosis, etc etc, so make of it what you will! 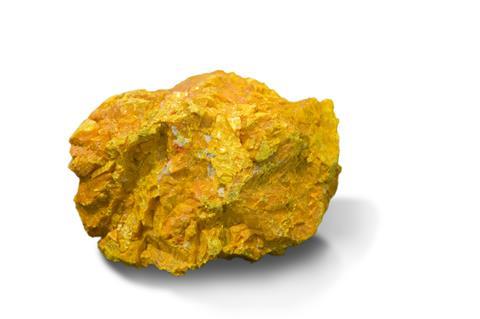 Arsenic doesn't seem much like a metal in its so called yellow form, but it also has a grey form known tellingly as metallic arsenic. Yellow arsenic has a specific gravity of 1.97 while grey arsenic has a specific gravity of 5.73. Grey arsenic is the usual stable form with a melting point of 817 degree Celsius. It is a very brittle semi-metallic solid, steel grey in colour that tarnishes readily in air. It's rapidly oxidized to arsenous oxide which smells of garlic if you are brave enough to smell it when you heat it.

In the days when deliberate arsenic poisoning remained a real threat and before the arrival of tests that could alert the authorities to its presence. Poisoning was some times diagnosed on the basis of a victim's garlic breath. In a curious twist far more recently, researchers in India showed that eating 1 to 3 cloves of garlic a day could protect people from the arsenic poisoning associated with contaminated drinking water. 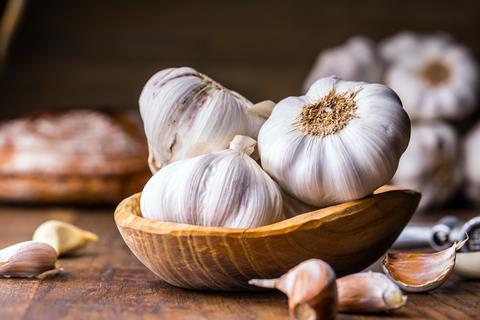 The reappearance of garlic is coincidental and the type of poisoning, acute deliberate poisoning versus unintentional long term poisoning by drinking water is very different. Arsenic levels in ground water are sometimes elevated as a result of erosion from local rocks. There's a particular problem in Bangladesh, rising arsenic levels there followed what was supposed to be an improvement to the water supply. Local populations used to get their drinking water from open sources like ponds. But about 30 years ago they started getting water from wells. Well digging saw a marked decrease in water borne infections. By 1993 it was discovered that arsenic was present in these wells. The first symptoms found in people drinking arsenic contaminated water include pigmentation changes in the skin and skin thickening or hyperkeratosis. After about 10 years drinking that water symptoms extend to skin and internal cancers. The World Health Organization report that arsenic in drinking water could end up causing between 200,000 to 270,000 deaths in Bangladesh from cancer. Arsenic levels appear to be lower in shallower, ground water or in much deeper aquifers and this knowledge should hopefully contribute to reducing the risks in future.

On a lighter note, I'm afraid there isn't much evidence despite its link with the Greek word for potent that arsenic is an aphrodisiac. It's a shame because it might have been rather useful if it was. An arsenic-based drug called Salvarsan was developed in 1910 by Nobel laureate Paul Ehrlich to treat the sexually transmitted disease syphilis.

Chemistry World's Bea Perks on the science of element number 33, arsenic. And if you think arsenic is nasty, wait till you meet next week's element

It sounds like a Doctor Who monster and in a number of ways this element does have a few properties that would make it suitable for any good, outer space sci-fi horror movie. For a start, like many space monsters it comes from slime. Every good monster must have a secret weapon and tellurium is no exception. It gives its enemies garlic breath. Really bad garlic breath.

Nice! That was Peter Wothers who will be here to tell the tale of the smelly element Tellurium on next week's Chemistry in its element. I hope you can join us. I'm Chris Smith, thank you for listening and goodbye.