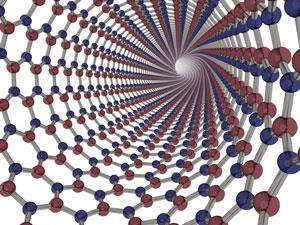 This week, Brian Clegg makes us take a second look at an underappreciated compound.

Many simple inorganic compounds, such as sodium chloride or iron oxide are familiar enough, but boron nitride – just one boron atom to one of nitrogen – has far less visibility than it deserves. It is a superbly useful compound, perhaps the best kept secret in all of chemistry. In part this is because it did not exist until made in the laboratory - boron nitride was first produced near the start of the eighteenth century, but not used commercially until the 1940s. Nowadays, it is made largely by reacting boron trioxide or boric acid with ammonia (or sometimes urea) in an atmosphere of nitrogen.

What makes boron nitride special is its similarity in electronic structure to that most versatile of elements, carbon, sharing the same number of electrons between adjacent atoms. Boron nitride is the carbon of the compound world, with its own equivalent of all the carbon forms, even the exotic fullerene molecules, which for boron nitride can have combinations of squares, pentagons, hexagons and octagons in their ball-like construction. 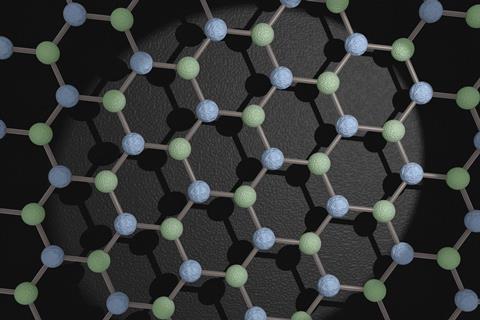 The two most-used forms of boron nitride are its equivalents of graphite and diamond. Just as synthetic diamonds are made from graphite, the diamond-like cubic boron nitride is produced from the basic hexagonal version, by applying extreme pressure and temperature. The result is crystals that are nearly as hard as diamond, and beat their carbon brethren hands down on some other capabilities.

In fact, even where hardness is concerned, boron nitride can be given the edge over its glittering rival. Crystalline structures are subject to the Hall-Petch effect, where the hardness of the material is greater if the structures have a smaller grain size. By processing carefully selected nanoparticles of boron nitride, a group from Yanshan University in China has produced cubic boron nitride with a series of twin domains around 3.8 nanometres thick. The result was a substance exceeding the optimal hardness of synthetic diamonds.

But even without this tortuous process, cubic boron nitride has significant advantages over diamond for some applications. It is less likely to undergo chemical reactions with metals and has greater resistance to heat, making it ideal as the ultimate abrasive. By comparison, the hexagonal form, like graphite, makes a good lubricant, and its limited chemical reactivity and stability means it finds its way into cosmetics. Unlike graphite, it is not a good conductor, which can also be beneficial in some applications.

The hexagonal form has a very wide range of uses. Beyond cosmetics it is incorporated into high temperature ceramics, in self-lubricating bearings and in electronics as a substrate on which to layer semi-conductors. It is used in laser printer components, pencil leads, plastics and space applications, where it is preferred to graphite because it works without the gas or liquid molecules between layers that are required for graphite to be an effective lubricant. It is even used to coat bullets, cleaning oxidation from the barrel for a straighter shot.

One more significant structure of boron nitride is the wurtzite form, the same strangely distorted crystal structure adopted by cadmium sulfide and zinc oxide. Technically this is even harder than the cubic form, though like the carbon equivalent, lonsdaleite, it has limited practical applications to date. It is, however, finding its way into use as a ‘superabrasive’ where it has the added advantage of having a structure that sharpens itself as it is used.

Another parallel with carbon is the ability to grow boron nitride nanotubes. These constitute a one molecule-thick sheet of boron nitride rolled up to make a tube, and like carbon nanotubes are very strong and light. Unlike the carbon equivalent, though, the boron nitride tubes are insulators, less chemically reactive and less susceptible to breakdown in high temperatures. In the future these nanotubes are likely to be incorporated into panels for aerospace construction, adding strength but retaining lightness. An added bonus could be their properties when the boron 10 isotope is incorporated: the lighter isotope absorbs radiation, meaning that such nanotubes could act as ‘radiation shields’ in future interplanetary missions.

Always keen to follow in carbon’s footsteps, there is also a boron nitride equivalent of the new carbon wonder form, graphene. Sometimes called ‘white graphene’ these nanosheets of boron nitride are already proving equally versatile. One application is to remove pollution from water. A nanostructured material made from the sheets can absorb up to 33 times its own weight in oils and organic solvent, but at the same time it repels water (a factor that also makes the sheets useful for self-cleaning displays that don’t fog up with condensation). Once it is saturated with the pollutant, the sheet can easily be cleaned by heating it, burning off the pollutant but leaving the sheet undamaged.

Like graphene, the near-two dimensional sheets are likely to have wide applications in electronics, where the insulating capability make them a natural partner for graphene’s conductivity, with a study in Texas, amongst others, already investigating growing stacked layers of the two materials.

In a world where carbon is so readily available it might seem unclear why we should go to the trouble of making boron nitride, yet in many of its structures it can beat carbon at its own game. We won’t see boron nitride-based lifeforms, because carbon’s unique role there owes more to its molecular bonding than its crystal structures. But for many other uses, this week’s compound is so valuable that it is boron nitride, rather than diamond, that is a material scientist’s best friend.

Science writer Brian Clegg with the chemistry of boron nitride. Next week, beware of the snail, believe it or not.

Cone snails and are among the deadliest sea creatures, producing one of the most complex venoms on the planet. When they’re alive and hunting, they can fire tiny darts laced with a cocktail of uniquely toxic molecules. What these slow-moving snails lack in physical prowess they more than make up for in their mastery of chemistry.

And discover this mastery with Helen Scales in next week’s Chemistry in its Element. Until then, thank you for listening, I’m Meera Senthilingam.