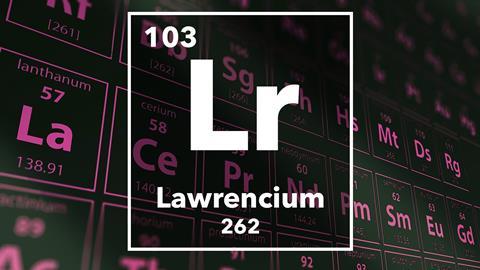 Eric Scerri puts an element back in its place

This week it's our final chemical element, and it doesn't seem to know its place. Eric Scerri.

Element 103 in the periodic table is called lawrencium. It was first synthesised in 1961 at what was then called the Lawrence Radiation Laboratory, situated close to San Francisco. The synthesis was carried out by a team of scientists led by Albert Ghiorso. The element was named after Ernest Lawrence, the inventor of the cyclotron particle accelerator that was used in the synthesis of many transuranium elements. 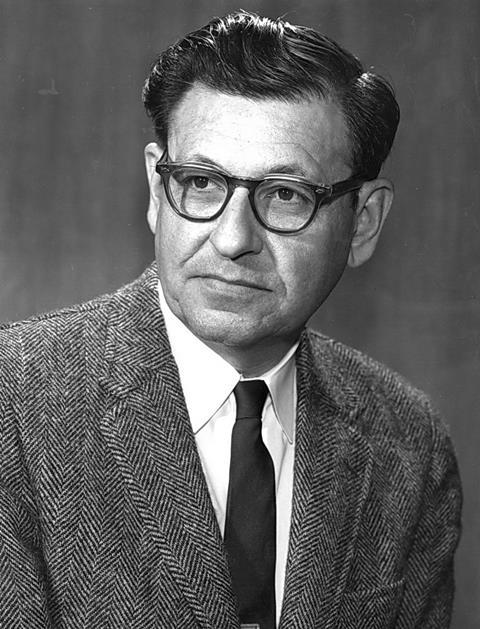 Starting in 1969 the chemical properties of lawrencium began to be explored. In the gas phase the element forms a trichloride. Studies of its aqueous phase also show that it displays trivalency. You might think that these experiments and others like it would have settled the precise position of lawrencium in the periodic table, but this has not been the case.

In recent years there has been an ongoing debate concerning the placement of lawrencium, and also element 71 or lutetium. Some periodic tables place lutetium and lawrencium one above the other, as the last of the lanthanides and the actinides respectively.

However, on a significant number of more recent periodic tables you will find lutetium and lawrencium classified as transition metals and placed directly underneath scandium and yttrium in group 3 of the periodic table. How can such disagreement still persist at the end of the first decade of the 21st century?

The answer is that electronic configurations of atoms are not sufficient to settle this question, just as they do not fully settle the question of where hydrogen and helium should be placed in the periodic table, a point I will return to later.

The elements placed directly under scandium and yttrium in older periodic tables are lanthanum and actinium, but on the basis of electronic configurations lutetium and lawrencium have as much right to occupy these two places. 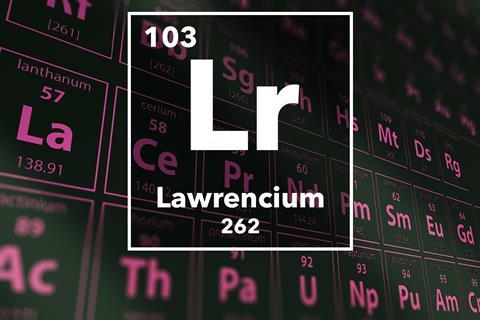 Periodic table of the elements – 103 – Lawrencium

The trouble began when yet another element, ytterbium, the one before lutetium, was assigned a revised electronic configuration of 4f14 6s2 as its two outer most orbitals. The configuration of lutetium did not change and since it consisted of 4f14 5d1 6s2 this meant that lutetium could now be considered as the first element in the third row of the d-block, and ytterbium as the final member of the lanthanide series.

One possible resolution comes from considering the long-form or 32 column wide periodic table, as compared with the more usual 18 element wide or medium-long form. If one tries to construct the long-form table it is lutetium and lawrencium that fall more naturally under scandium and yttrium in group 3. If one insists on placing lanthanum and actinium in group 3 the atomic number ordering becomes highly irregular.

But this fact has not convinced everyone and nor have the numerous chemical and physical similarities that exist when lutetium and lawrencium are considered as homologues of scandium and yttrium. To make matters worse, the configuration of this week's element, lawrencium, has now been revised as a result of some calculations that include quantum relativistic effects. Although it has not been possible to make even indirect observations of this configuration, the calculations strongly suggest that the most energetic electron in the atom of lawrencium is in a 7p orbital and not 6d orbital as previously believed.

The official governing body, the International Union of Pure and Applied Chemistry has so far refused to take sides on the question of which elements make up group 3. They maintain that they only preside over questions regarding the discovery of new elements and the assigning of new names to elements.

Meanwhile the debate has been waged rather vigorously in the pages of the Journal of Chemical Education where several authors, including myself, have aired their opposing views. It is strange to think that even today the placement of not just one, but two elements remains in doubt. And this is not to mention the related debates in which some experts argue, rather plausibly, that hydrogen should be placed at the top of the halogen group and helium should be moved to the head of the alkaline earth metals.

Clearly the periodic table, and the elements, still hold many surprises in store for us.

So although that's it for the chemicals currently found in the periodic table, there may still be changes and additions to look out for in the future. That was UCLA scientist and author with the undecided chemistry of lawrencium.

Now that's it for this series of Chemistry in its element, bringing you the discovery, tales and chemistry of course of the chemical elements. But don't fear, we're back next week with a whole new series looking into the exciting and complex world of chemical compounds. So join us then to find out more. But until the new series, thank you for listening. I'm Meera Senthilingam.