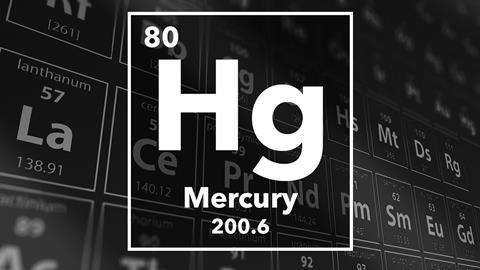 Hello! This week, we're exploring the link between Mad Hatters, mascara, the emperors of China and fishing floats; a strange combination you might say, but probably not as strange as this!

Could a man walk across a swimming pool filled with mercury? Don't ask me how the conversation had reached this point, but being surrounded by friends, who would, it is fair to say, describe themselves as science illiterate, I knew it was up to me, the token scientist around the table, to give the definitive answer. "No." I confidently said, adding rather smugly, "it is nowhere near dense enough." The next morning I was rudely awakened by my ringing mobile; I was wrong! Elemental mercury, a liquid at room temperature, is 13 times denser than water. Enough it turns out to support a man of average build and yes, if you type man sitting on Mercury into Google, you'll quickly find a 1972 photograph, published in National Geographic of a man suited and booted, sat unaided, albeit a little nervously, on top of a tank of rippling mercury. I've been unequivocally proved wrong, but within a fraction of a second, this feeling had been transformed to sheer amazement. Amazement not just at the fact that mercury was so dense it could support a man, but more pressingly that the man in question was very likely giving himself a lethal dose of mercury poisoning in one fatal pose. Surely even in 1972, this kind of activity was seen as an exceptionally bad idea. This of course was not the first time that man has been lowered in by mercury. 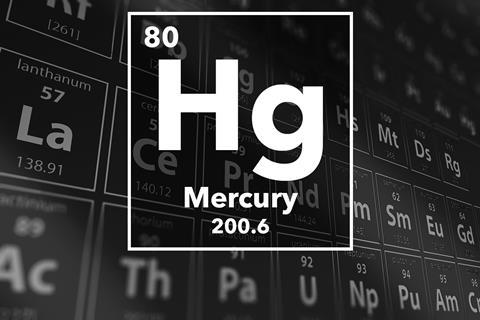 Periodic table of the elements – 80 – Mercury

With its Greek name, hydrargyrum, literally meaning liquid silver it's perhaps unsurprising that for the last three millennia, civilizations have been transfixed, believing mercury held wondrous physical and spiritual properties, but often those who dabbled reached an unpleasant and mercurial end. The Romans were renowned for using it in cosmetics, often disfiguring their faces in the process. The Egyptians were buried with it to illustrate their civilizations' mining prowess and the ancient Chinese drank lethal mercury cocktails seeking eternal life and well-being. Indeed, Chinese first emperor, Qin Shi Huang is said to have believed so strongly in the magical properties of mercury that he died seeking immortality by coughing out mercury and powdered jade, pick-me-up. His tomb yet to be fully unearthed is thought to be surrounded by great rivers of the element and guarded by the 8000 soldiers of the terracotta army.

Skipping forward to the 18th Century and for the first time, psychological illnesses were attributed to mercury exposure. The madness of many millionaires was blamed on the extensive use of mercuric nitrate in the hat industry and the phrase Mad as a Hatter  was coined. The link almost certainly inspired Lewis Carroll to dream up the Mad Hatter, although much debate hangs over whether he is in fact displaying the symptoms of mercury poisoning. From this point on, the hazards of mercury were well documented; but despite its toxicity, it continued to find many uses in everyday applications throughout the last century. To forego reeling off a huge list of weird and wonderful uses for mercury, I would just briefly mention my personal favourite, fishing floats, used to maintain in an regular wobble on the water surface, the mercury float proves so alluring to fish that even now after its use has been globally banned, there is active research to find a replacement to do an equal job. It can still be found swirling around in dentistry, where it is used in amalgam fillings and it remains an important ingredient of many mascaras. But both these sources of mercury are currently under threat. Even the humble thermometer is gradually being phased out to be replaced by alcohol filled digital or thermistor-based instruments. 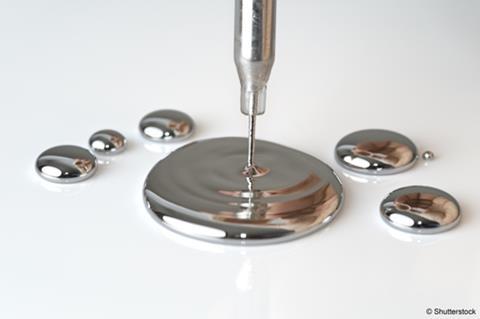 The liquid magic of mercury

On one hand, it saddens me to think that mercury will eventually be an elemental artefact sitting hopelessly between gold and thallium in the periodic table, but on the other, it constantly reminds me of the dangers that hide behind the facade of its beautiful silver lustre. As for the man sitting on the vat of mercury, unfortunately I'm still waiting to hear back from National Geographic, for his sake though, we can only hope that he is living a long and healthy life and has not joined the long list of mercury's many victims.

Chemistry World's Fred Campbell on the uses and abuses of element number 80, Quick Silver, otherwise known as mercury. Here's a taste of what to look forward to next time.

The first thing most people think about when this element is mentioned is barium enema or barium swallow, sickly memories often surface off the radiology clinic, where the nice nurse asked you, 'what flavour would you like, strawberry or banana'.

A hard act to swallow, you could say, but thankfully a very digestible account of barium. That's coming up with Adina Payton on next week's Chemistry in its elements. I'm Chris Smith, thank you for listening and goodbye!