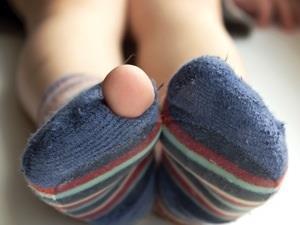 Once a fusty way of keeping moths out of clothes, Brian Clegg explains how naphthalene may have helped bring life to Earth

This week, what’s in a name? Brian Clegg tells us…

There are some compounds that are blest with evocative names. Admittedly, you could call naphthalene ‘bicyclo[4.4.0]deca-1,3,5,7,9-pentene’ if you wanted to be pedantic (or a chemist), but naphthalene gives us a double dose of meaning that isn’t there in the systematic name. 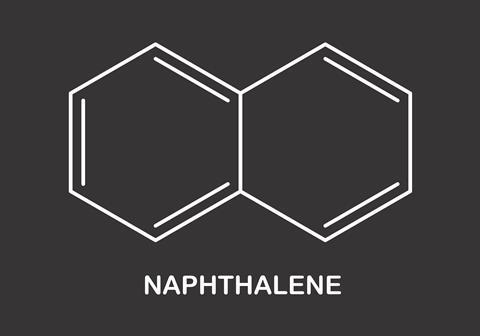 First there is the word’s origin. It is derived from ‘naptha’, one of the oldest chemical names in the book. The Latin word we use today is a direct transliteration from Ancient Greek – but even that is a modernization. The most likely sources seem to be Aramaic and Akkadian, found in early Babylonian cuneiform texts as far back as an astounding 18th century BC. For nearly four thousand years, types of oil were given this name, originally for a thick type of bitumen, but by the 1500s starting to be more applied to volatile hydrocarbons.

‘Naptha’ has sometimes been used as a shorthand for naphthalene, usually when referring to the form that gives the compound its second, fragrant overtone – as the substance of mothballs, with all the association of decay and faded Edwardian splendour that form a part of those outdated items’ baggage.

In reality, naphthalene is the simplest of the aromatic hydrocarbons with more than one ring (the polycyclic hydrocarbons) – effectively it is two benzene rings stuck together – and is traditionally derived from coal tar, hence its name to suggest a naptha derivative. This white solid with a strange, pungent smell was first reported in 1819 by Alexander Garden, a Scottish chemist who ran a chemical supply shop in London, identified as C10H8 by the versatile Michael Faraday in 1826, and finally had its structure discovered in the 1860s. Interestingly, it is often described as having ‘an odour of mothballs’, which is not very helpful if you have never come across one.

Although the knee-jerk reaction on hearing ‘naphthalene’ is to think of those mothballs, it is rarely used to kill moths any more. However it is produced - still from coal tar – to be used in the production of other chemicals. The biggest application is as a source of the hugely important phthalic anhydride, which we get through in the millions of tonnes a year. Although it is more commonly made now from xylene (a benzene ring with a pair of extra carbons attached), there is still a large quantity of naphthalene used in the production of this chemical, which then goes on to be employed in making plastics and plasticisers. 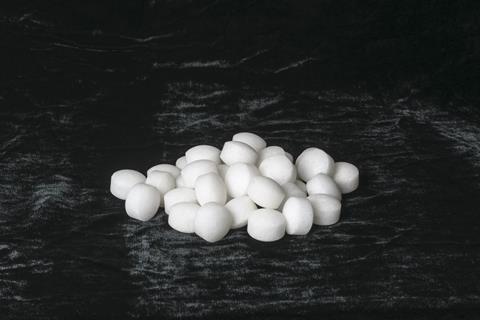 Although mothballs were once quite casually scattered through drawers and wardrobes in the home, naphthalene is a substance that is best used in controlled circumstances and kept away from human beings. If inhaled or swallowed it destroys red blood cells, causing fatigue and paleness, with stronger doses resulting in vomiting, nausea and jaundice.

Primarily found in coal tar, where it comprises around ten percent of the original tar and as much as 50% of the distillate, naphthalene is produced naturally by some plants and insects, but most interestingly it has also cropped up in space, where it is one of the most complex organic compounds so far detected, in this case around 700 light years from Earth in the direction of Cernis 52, a star in the Perseus constellation. This is of particular interest because naphthalene can react with water and ammonia, both common in interstellar space, under the influence of ultraviolet light, to form a wide range of aminoacids and precursors to vitamins that could have been valuable in the development of life.

As well as suggesting a role in the origins of life, the presence of naphthalene in the interstellar medium helps clear up a problem that has plagued space spectroscopy for 80 years. When a spectroscope is trained on interstellar matter, detecting the chemical constituents from the light spectrum that passes through, there are a wide range of bands known as ‘diffuse bands’ that have never been understood. The researchers at the Instituto Astrofísica de Canarias who discovered the distant naphthalene now believe that it is this compound and other polycyclic aromatic hydrocarbons that produce the diffuse bands, meaning that the substance should be found widely through interstellar space.

So it is that naphthalene has grown up. What was once a fusty (and quite dangerous) way of keeping moths out of your fur coats has become an essential precursor to the production of plastics and could be widely spread through space as one of the chemicals that brought life to Earth. Not bad for a compound with a heritage that dates back pretty much as far as records exist.

Taking us that far back was Brian Clegg, with the moth-busting chemistry of naphthalene. Next time, it’s time to wake up, slowly.

I have a lamp on my bedside table that gradually lights up at a pre-set time, in an attempt to simulate a sunrise and trick my body into thinking it’s time to start the day during those dark winter months when it’s pitch black outside and considerably more appealing to stay buried beneath the duvet. What the lamp is trying to do is channel my body’s natural circadian rhythm, the 24 hour cycle that is closely attuned to periods of light and dark.

And discover the compound behind this effect by joining Anna Lewcock in next week’s Chemistry in its Element. Until then, thank you for listening, I’m Meera Senthilingam.