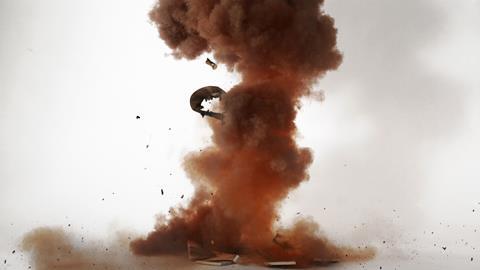 This week, we get out the gloves and goggles and prepare for some bangs. Well, Brian Clegg does, anyway:

Like many people of my age, I had a chemistry set in my youth - but mine was a bit different from most. My father worked for a company with a chemical lab, and I tended to get everything they threw out. Not every home lab had two chemical balances (one mechanical and one electrical). The best part of this was the ease with which I could get chemicals that you wouldn't find alongside copper sulfate in your boxed chemistry set. My shelf was always well stocked with iodine and ammonia.

The iodine wasn't the brown liquid of painful memory for older listeners - actually a solution of iodine used as a disinfectant - but the solid, crystalline element. I had a big jar of this, plus a Winchester of ammonia. For those not familiar with labs, a 'Winchester' is the pet name for a 2.5 litre bottle, a label possibly dating back to the Saxon capital of Winchester where standard units were set, including the Winchester quart - half a gallon - not dissimilar in volume. 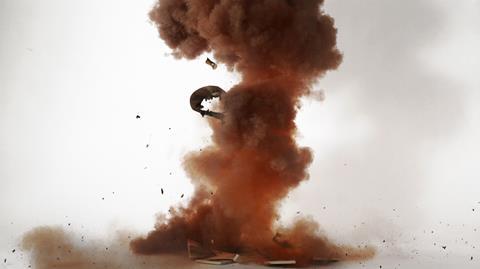 Nitrogen triiodide detonating as a balloon is dropped onto it. Nitrogen triiodide (NI3) is an extremely sensitive contact explosive. Its sensitivity is due to the immense strain in the molecule, in which three large iodine atoms are bound to a small nitrogen atom. The slightest touch can cause the breakdown of the NI3 molecules, leading to the production of nitrogen gas and a cloud of iodine vapour. This is a still frame taken from footage filmed at 2000 frames per second.

As far as I was concerned, there was only one reason for having these substances. Ammonia is a simple compound of nitrogen with three hydrogen atoms. What I technically had was not strictly ammonia, but ammonium hydroxide, a solution of ammonia in water, as ammonia is a gas at room temperature. Pour the liquid onto the iodine and a chemical reaction takes place. As the iodine dissolves, it displaces the hydrogen from the ammonia and precipitates out a black solid. This is referred to as nitrogen triiodide, NI3, though, as we'll see later, it's actually more complex. Whatever it's true composition, though, it is a substance with unique properties.

While still wet, the black powdery substance is relatively innocuous (though it can be unstable). In appearance it is not dissimilar to powdered carbon. But let it dry, and it becomes remarkable. Nitrogen triiodide is a touch sensitive explosive. The lightest pressure and it blasts out of existence. In anything more than a pinch this is a dangerous substance, but in a thin coating it produces entertaining cracks and bangs.

This was a wonder substance to a typical teenager. A very thin coating on floor tiles produced a highly satisfying booby trap of a room that couldn't be crossed without a dance of shock as the floor erupted in a series of minor explosions. Treated toy soldiers would collapse with a suitably loud crack when shot with an air rifle. I have to confess, the amusement value of it carried on to university. Our unpopular organ scholar suffered from a misbehaving practice piano, which gave off mysterious cracks and bangs every time he touched the black notes. I ought to stress that this was highly irresponsible, and nitrogen triiodide should never be used in practical jokes for safety reasons.

When the substance receives an impact it produces nitrogen - the expulsion of which provides the explosive power, iodine - which leaves a yellow-brown stain on the object coated in the substance. What remains is ammonium iodide, NH4I, a white solid, which itself decomposes to provide more iodine in damp air.

Although nitrogen triiodide is the best know of the family, its relation nitrogen trichloride is even more sensitive, with a tendency to explode on exposure to sunlight as well as contact. It is thought that the explosion that temporarily blinded Humphrey Davy was caused by this substance. Davy called in an uneducated young man, who had been spotted making detailed notes in his lectures, to act as a secretary while the scientist was blinded. The young man was sent away after his short term job, but eventually got back into the Royal Institution - his name was Michael Faraday. Davy was following up the work of French chemist Pierre Dulong, who isolated nitrogen trichloride, but lost three fingers and an eye to its instability. Nitrogen trifluoride, by contrast, is stable, in part because, unlike the other molecules in the family, it features a small enough atom in fluorine to not be too crowded when fitting three of them around a compact nitrogen atom.

In the real world, nitrogen triiodide is of little use. It's a perfectly respectable explosive, but lacking the potential for stabilization of nitroglycerine, it is so sensitive, so easy to set off by accident, that it isn't practically employed. One unique property of the compound feels like it should have an application. This is so far the only explosive discovered that it is possible to trigger using neutrons or alpha particles from nuclear fission or accelerators. Somehow this fits well with the unnerving instability of the compound.

When this series of compound podcasts was first suggested, it's indicative of the fascination of nitrogen triiodide that this useless substance was the very first compound that sprang to my mind. You certainly want to stay in the good books of nitrogen triiodide. Of all the compounds, it has to be the touchiest.

So it may be best to keep your hands to yourself. That was Brian Clegg with the sensitive and explosive chemistry of nitrogen triiodide. Now, next week, we stick with nitrogen, but in the form of an oxide, to hear about a role where you certainly don't want any bangs...

The chemistry of nitric oxide inside humans and other mammals is perhaps the most interesting aspect of this simple molecule's behaviour. NO is involved in controlling blood pressure; transmitting nerve signals and a variety of other signalling processes. Its radical single electron can also be used as a weapon by the immune system to kill invading bacteria. Its role in biology is so significant that Science magazine proclaimed it their 'molecule of the year' in 1992.

Quite an award. And to find out just how nitric oxide performs these award-winning roles within our bodies, join Phillip Broadwith in next week's Chemistry in its element. Until then, thank you for listening. I'm Meera Senthilingam.