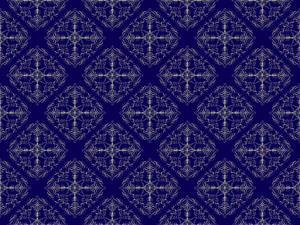 This week, we go back to a time when feeling blue was a good thing. Explaining more is Laura Howes:

Today blue is everywhere - we don’t give the colour much thought, but we constantly refer to it, from the excitement of blue skies research to the misery of feeling blue. Until the eighteenth century, however, blue was a highly prized colour - expensive and tightly controlled. If you look at artwork from before this time, the colour blue is rare and often only used in religious paintings - and mostly only to colour the clothing of the holiest people. To paint in blue was the equivalent of today’s celebrities wearing ‘bling’. 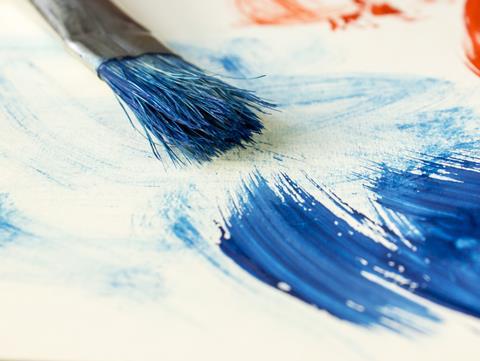 The pigment used to produce this prized paint was ultramarine, itself made from the mineral lapis lazuli. As the name ‘ultramarine’ suggests, this came to Europe from ‘beyond the sea’ - Afghanistan, to be exact, which explains why the colour blue was such an expensive rarity. That all changed with the introduction of one of the first synthetic pigments, coming out of Germany in the early 1700s, called Prussian blue.

The discovery of Prussian blue is credited to a German paint maker called Diesbach. As the story goes, he was trying to make a red pigment using the shells of the cochineal beetle, but contamination meant he ended up with something blue. The value of this new pigment was immediately obvious, especially when it was shown to be stable and relatively insensitive to light. It was a sensation, not least because the new pigment was much cheaper. It was soon being sold around Europe with the patriotic names of Preußisch Blau and Berlinish Blau, and was even exported to the Japan, where painters and woodblock artists were also in need of a long lasting blue pigment. If you take a trip to an art gallery or museum and look at artworks from after the 1700s, suddenly blue becomes a lot more popular after Diesbach’s serendipitous accident all those years ago.

But Prussian blue is a complicated compound and for many years, despite being able to manufacture the pigment, no-one was entirely sure what it was - apart from a blue crystalline solid that could make them money. In fact, the complex structure means that the exact composition of the pigment can vary depending on inclusions in the crystal lattice. But in general, the compound is a cubic arrangement of iron hexacyanoferrate: two different oxidations states of iron - three-plus and two-plus - in a ratio of 4:3. 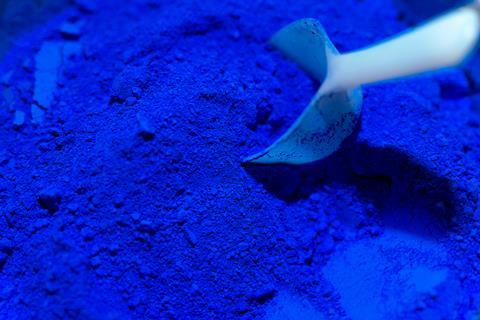 That might be difficult to visualise without me drawing it out in front of you, but the important thing to understand is that iron two-plus sits in different surroundings to the iron three-plus ions. This difference in the electronic environment means that the molecular orbitals involving the two ions are different. So when light shines on crystals of Prussian blue, it absorbs orange light and transfers an electron from iron two-plus to iron three-plus.

This is known as interatomic charge transfer - the electron jumps from one molecular orbital to one belonging to a different atom and the energy required to make that jump is equal to the wavelength of light absorbed. The unabsorbed light is reflected and that’s why we see Prussian blue as blue.

You can still paint with Prussian blue today, although other synthetic blue pigments and paints have since been developed, but the pigment has found other uses. For example, Prussian blue is also used to treat people who have been internally contaminated with radioactive caesium or highly poisonous thallium. Patients swallow capsules of the pigment and in the intestines the compound incorporates the metal cations into its lattice. By absorbing the dangerous metals, Prussian blue stops them being reabsorbed by the body and instead they are passed out in the normal way, but much quicker; for example, the biological half-life of caesium can be reduced from 110 days to about 30.

Prussian blue: from Picasso’s blue period to saving the day from nasty poisoning, this compound has seen it all.

So, artistic and health benefits; quite a compound indeed. That was Chemistry World’s Laura Howes with the colourful yet medicinal chemistry of Prussian blue. Now, next week: the compound we all used to hate.

These days the environmental compound we love to boo and hiss is carbon dioxide, but go back a few years and it was CFCs - chlorofluorcarbons. In the 1970s, this versatile family of compounds was discovered to be attacking the Earth’s ozone layer, increasing the levels of ultraviolet light making it through the stratosphere and increasing the risk of skin cancer for the population below.

No one would have given the slightest thought to this possibility back in the 1920s when Thomas Midgley Junior, working at General Motors, was searching for an alternative to ammonia and propane as refrigerants. The existing refrigerants were poisonous and, in some cases, highly flammable. Midgley thought that he had found the ideal replacement - a sentiment that would be generally agreed upon for the next 50 years.

And you can find out how the dangers of CFCs were discovered, and prevented, by joining Brian Clegg in next week’s Chemistry in it’s Element. Until then, thank you for listening. I’m Meera Senthilingam.