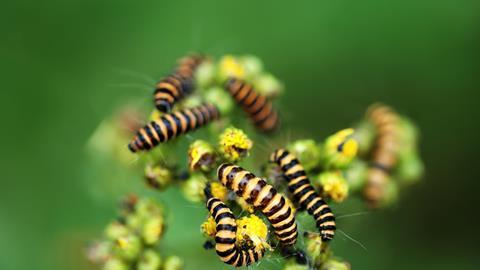 Pyrrolizidine alkaloids from Ragworts and other plants are popular with pollinators but a potent poison to livestock, as Mike Freemantle discovers

This week, a compound from a plant that is popular with pollinators, but potently poisonous to wild and domestic animals. Here’s Michael Freemantle… 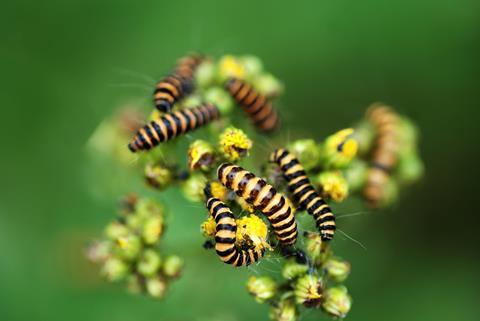 Common ragwort is a tall erect plant with bright yellow flowers that grows in waste land, field margins, road-side verges and woodlands throughout Britain from June to November. You can hardly miss it if you go for a walk in the countryside during the summer.

The plant is one of some two thousand species of ragwort and is generally regarded as a weed. It is extremely poisonous to many animals and frequently infests pastures where cattle and other livestock graze. In the UK, landowners and land occupiers are required by law to control the growth of the plant in fields used for grazing or for producing forage. They either spray the plants with a herbicide or dig them out and dispose of them, typically by burning, then repeat the process each year as ragwort seeds are blown in from neighbouring land.

Cows and horses are particularly at risk if they consume the plant. It can cause cirrhosis of the liver and in some cases prove fatal. There is no known antidote for the poison. Chickens and pigs are also sensitive to ragwort poisoning, while sheep and goats are less susceptible and deer are fairly resistant.

Fortunately for cows and horses, they don’t like the taste of ragwort and tend to avoid it unless food is scarce. The main danger occurs when the plant is cut, dried and gets into forage such as hay or silage. The plant then loses its bitter taste but retains its toxicity.

Whereas most farm animals don’t like eating ragwort because of its bitter taste, some animals absolutely love it. An estimated 150 species of bees, butterflies, flies and other insects visit the plant to feast on its nectar.

The plant is a particular favourite of cinnabar moths. The moths fly during the day and have black wings with bright red patches. Their caterpillars steadily munch their way through the ragwort leaves and assimilate the pyrrolizidine alkaloids into their bodies. This makes the larvae unpalatable to most birds and other predators. They also have yellow and black stripes that, like the brightly coloured wings of the moths, help to frighten off potential predators. 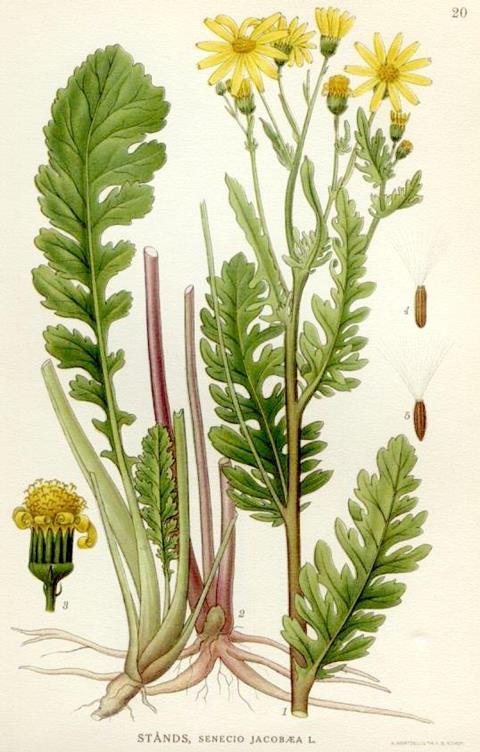 Illustration of Ragwort, or Jacobaea vulgaris, from Bilder ur Nordens Flora by C. A. M. Lindman (1856–1928)

Pyrrolizidine alkaloids are also poisonous to humans, although, of course, we are unlikely to include ragwort or other toxic plants in our diet. Even so, the alkaloids can find their way into our food by a variety of routes, such as contamination of milk produced from dairy animals feeding on ragwort, and flour ground from grain contaminated with ragwort seeds. They may also occur in honey collected from bees that feed on ragwort nectar. In the majority of cases, the level of contamination is so low as to pose little or no health risk. There has been some concern, however, about the regular consumption of herbal remedies prepared from plants that may contain the alkaloids.

Cases of pyrrolizidine alkaloid poisoning in humans are rare. When they do occur, the symptoms include nausea, stomach ache, fever and jaundice. Chronic illness caused by consumption of small amounts over lengthy periods can lead to cirrhosis of the liver.

Nature, however, has been synthesizing the alkaloids in ragworts and other plants since time immemorial. These natural syntheses are yet another example of the duality of nature’s chemical warfare. Its chemical products are highly toxic to some animals, yet essential to the survival of others.

Mike Freemantle on ragwort alkaloids. For next week’s Chemistry in its element podcast, Katrina Kramer spoke to one of the pioneers of Metal Organic Frameworks, or MOFs, Omar Yaghi…

More MOFs with Omar Yaghi and Katrina Kramer next week. Until then, get in touch with any questions or comments – email chemistryworld@rsc.org, tweet @chemistryworld. Thanks for joining me, I’m Ben Valsler.