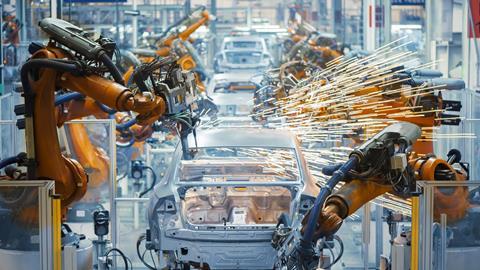 This week, Katrina Krämer introduces the compounds that herald a future where specialised chemicals make new molecules for us…

Making molecules is hard. Chemists spend a lot of time figuring out which compounds have to be subjected to what conditions to form new bonds. Working out how to make a particular molecule can take a very long time – the anti-malaria drug and tonic water flavouring quinine, for example, took 150 years.

Some chemists, including David Leigh at the University of Manchester, UK, argue that we should be developing machines that can be programmed to pick up individual functional groups and assemble them into a desired molecule. This would make the process of making complex natural products quite a bit simpler. 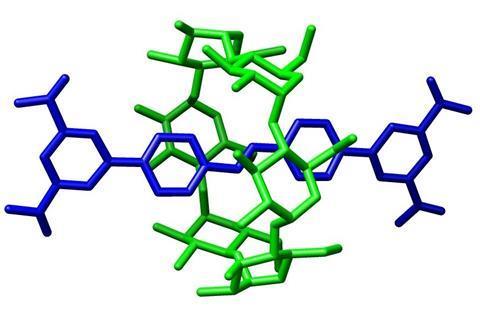 Source: Created by M Stone and released under CC BY-SA 3.0

So for example we see robots in factories putting together cars and other sophisticated objects through mechanical motion and manipulating the components. And one can wonder why can’t we do that at the molecular level? Why can’t we have molecular robots to actually construct things for us? People are starting to move in that sort of direction.

Over the last two decades, Leigh and his team have developed some of the first molecular machines. A curious class of molecules called rotaxanes were an essential part of this achievement.

Rotaxanes look unlike any other molecule: they are mechanically interlocked structures, consisting of two individual parts that are not actually chemically bound to each other. One part looks like a dumbbell – a long molecule with bulky parts, called stoppers, at each end – the other is a large ring-shaped macrocycle slipped over the dumbbell’s middle. Like your hand preventing a bracelet from falling off your arm, the stoppers prevent the macrocycle from slipping off the dumbbell.

When rotaxanes were first discovered, making them was arduous.

Rotaxanes were first made fifty years ago this year, in a 1967 landmark paper in JACS by Harrison and Harrison where they made rotaxanes by threading a macrocycle onto a chain that was attached to a polymer support, and they added these macrocycles on and stoppered the ends. They did it seventy times, repeated it seventy times in order to get a six percent yield of rotaxanes.

Luckily, researchers soon came up with better ways to make rotaxanes. Instead of just hoping that individual fragments would react in an interlocked fashion, chemists now usually use a metal catalyst that gathers the individual fragments, keeps them in a certain arrangement and thereby promotes rotaxane formation.

When thinking about how molecular machines work likening them to a macroscopic machine is appealing but also misleading. Unlike in our mostly steady surroundings, thermal motion makes the molecular world a much more wobbly affair.

The way that machines work in the big world is actually very, very different from how matter behaves in the molecular world. So in the big world, the laptop that I’m looking at you on as we have this conversation is a stationary object and it’s just going to be stationary unless I happen to knock it over during the course of our conversation. But if this was a molecular sized object it wouldn’t be stationary at all, it would be constantly moving through random thermal motion.

It’s not getting things to move that’s difficult in the molecular world, it’s controlling the directionality of that motion. That’s a very different proposition to the big world. Rotaxane architechtures are extremely useful for that in the molecular world because they allow large amplitude motions, so big motions, but only in the dimension that you’re concerned about – just the ring moving along the track, it doesn’t matter about the random thermal motions of the chain and the ring orthogonal to that, you can just try to control the motion in natural dimensions. So that’s one of the reasons why rotaxanes are very important.

With this in mind, however, Leigh’s team managed to build a functional molecular machine, very much like the total synthesis machine that is the dream of every organic chemist.

A few years ago we made a rotaxane in which a ring moved down a track and picked off building blocks as it was moving down the track and built a new sequential peptide sequence coming off it. I like that one very much because it’s reminiscent of the way that biology makes proteins, sequences of amino acids, because the ribosome also moves down a strand – a messenger RNA strand – and uses that sequence information to put building blocks together to build proteins. We’re trying to mimic that process using a rotaxane architechture, just an artificial one whereas the ribosome is a biological one.

Although Leigh’s peptide synthesis machine is nowhere near as complex as their cellular counterparts, one has to remember that the latter was millions of years in the making, whereas scientists have been working on artificial molecular machines for less than a century.

There’s all sorts of barriers to overcome still. You have to learn how to, first of all, to control the molecular movements – and chemists are getting quite good at being able to do that in response to particular stimuli. What we have to then do is to be able to program those movements so that the right ones happen in the right order, and that if you change the program – if you change the order of movements – you get some different product out or something different happens compared to a different input sequence. So that’s an important thing that we need molecular machines to be able to do that noone’s been able to actually do yet. But of course, again biology already shows us that it’s possible through how DNA replication works and so on. 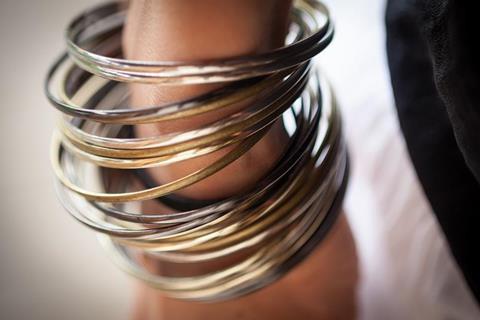 So there are many hurdles still to overcome, but people are making progress and it’s becoming more and more rapid. I hope it won’t be too long before we do see molecular machines being able to do things that just can’t be done any other way.

Although it still might be a few more years until rotaxanes could help us overcome our synthesis woes, researchers have already made all kinds of molecular machinery out of mechanically interlocked molecules: there are elevators, shuttles, switches, ratchets and even propellers. And the scientific community clearly sees big things ahead for rotaxanes: in 2016, Jean-Pierre Sauvage, Fraser Stoddart and Ben Feringa received the Nobel prize in chemistry ‘for the design and synthesis of molecular machines’.

The thieves partially broke open the container and sold it on for scrap. Because the exposed caesium chloride gave off an eerie blue glow, it proved a popular talking point – just as radium did when first discovered by the Curies.

Discover more about the versatile compound caesium chloride next week. Until then, drop us a line with any compounds you would like to hear more about – tweet @chemistryworld or email chemistryworld@rsc.org. I’m Ben Valsler, thanks for joining me.