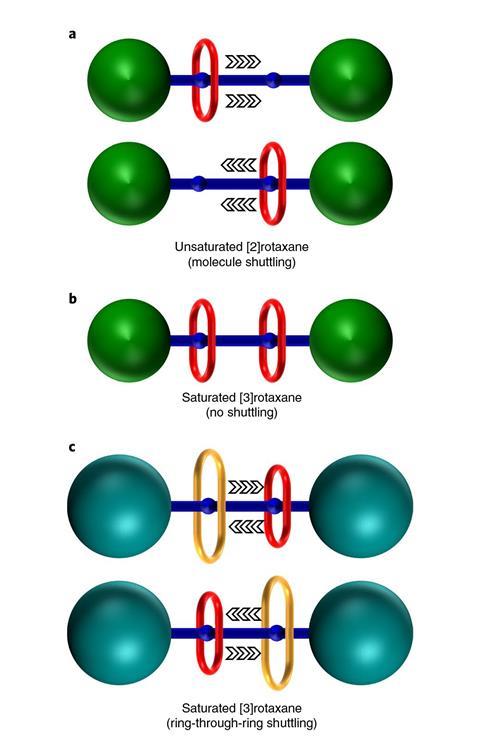 In an unsaturated [2]rotaxane (a), a single macrocyclic wheel (red) can shuttle between two recognition sites along an axle (blue), with stoppers (green) to prevent unthreading of the rings. In a [3]rotaxane (b), the system is saturated with macrocycles so no open recognition sites are available and no shuttling can occur. In this work (c), a saturated [3]rotaxane containing two macrocycles of very different sizes can shuttle by passing the smaller ring (red) through the larger one (gold)

By passing a small ring through a larger ring, researchers have created a rotaxane with a fundamentally new motion that could be used in future molecular machines.

‘This paper would require me to add a new section to [my book’s] chapter on the movement and stereochemistry of rotaxanes because the motion is so new,’ says Carson Bruns, at the University of Colorado, Boulder in the US, who co-authored a book on mechanically interlocked molecules in 2016 and was not involved in this new work.

Rotaxanes can also contain two rings, but those rings could not slide along the rod – until now. Giorgio Baggi and Stephen Loeb at the University of Windsor, Canada together with Kelong Zhu at Sun Yat-Sen University, China have prepared a rotaxane with a small ring that wiggles through a larger ring. 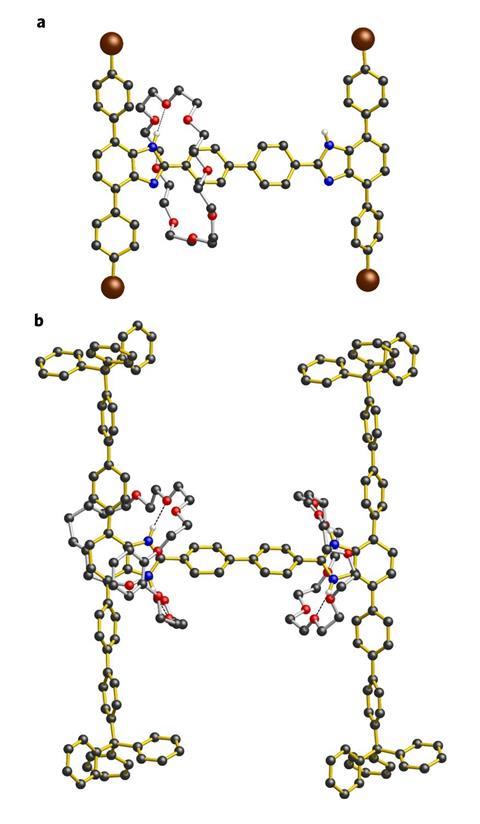 To make this molecule, the researchers first threaded a small polyether macrocycle onto a rigid aromatic hydrocarbon rod and capped the ends of the rod to trap the ring. Next, the researchers enlarged the stoppers with bulky trityl groups so that they could trap the forthcoming larger ring. Finally, they attached the second ring by clipping an open polyether to the rod and joining its dangling ends with a metathesis reaction.

To confirm that the rings changed places, the researchers used variable temperature NMR spectroscopy to monitor the unique signals from each amine in the benzimidazole recognition sites at either end of the rod, where the rings form hydrogen bonds to the rod. At room temperature, the rings slid between the benzimidizoles on the rod too quickly to distinguish a unique NMR signal from each amine. Distinct signals appeared at cooler temperatures, indicating that ring exchange slowed enough for the spectrometer to register that different sized rings clung to each amine.

Using data from the variable temperature NMR experiments, the researchers estimated that about 3kcal of extra energy are needed for one ring to pass through the other. Knowing from previous work that the small ring does not have much room to move around the rod, Loeb imagines that the extra energy is needed for the large ring to expand and create room for the smaller ring to pass through.

Imagining how this rotaxane’s new motion might be used in future molecular machines, Steve Goldup at the University of Southampton, UK, envisions a machine in which the small ring drags a chain through the larger one, like threading a needle. ‘This molecular level “weaving” process seems quite esoteric,’ he says, ‘but it might be an interesting way to generate complex materials with unusual properties.’