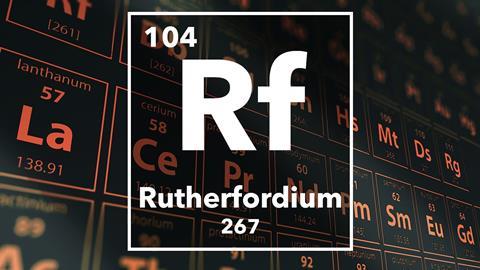 This week we find out how the elements beyond the actinides were discovered. Revealing the chemistry of the first transactinide rutherfordium, here's Simon Cotton.

When the last member of the actinide series, element 103 or lawrencium, was discovered, I was at school doing my A levels, and I remember reading about it in the magazine Scientific American. The isotope found had a mass of 258 and it didn't hang about for long – having a half-life of just 3.8 seconds. This was not unexpected as half lives had been getting shorter right along the actinide series.

This discovery prompted the scientific community to start asking, are there any elements waiting to be made beyond Lawrencium? And if so, where would they fit in the Periodic Table?

In those days, scientific competition between Russia and America was intense, and over the next few years both Russian and American nuclear scientists had a bash at element 104.

Both of them used the nuclear equivalent of a shooting gallery. They fired nuclear bullets, the positive ions of light atoms at targets. The targets weren't moving ducks, but stationary targets of very heavy nuclei.

What they had to do was to overcome the repulsion between the positive nucleus of the target atom and the positive projectile, so that the two nuclei fused together to make the new heavier atom. And both groups took different approaches. 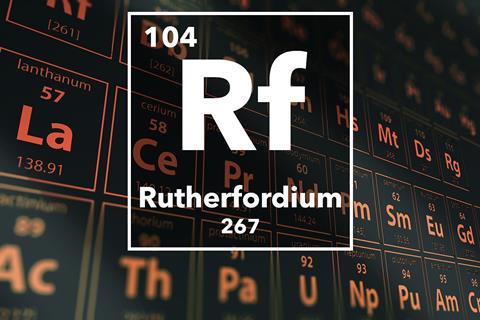 The Russians went first, firing neon-22 ions at a target of plutonium-242. The reaction products were immediately chlorinated, and the team claimed they had made a new element which had formed a volatile chloride, though they were not clear about which isotope they might have made, or even its half-life.

Three years later, an American team bombarded californium-249 with carbon-12 ions, and were confident they had made rutherfordium-257, identifying its alpha-decay product, an isotope of nobelium. This was confirmed by a different American team in 1973. Subsequently rutherfordium was also made in 1985 by a German team at Darmstadt, who bombarded a lead-208 target with titanium-50 ions, in other words a lighter target but a heavier projectile.

Since it wasn't clear who the true 'discoverer' was, both the Americans and the Russians suggested names for element 104. The Americans called it Rutherfordium, after Ernest Rutherford, who pioneered the planetary model of the atom and discovered nuclear fission, whilst the Russians chose Kurchatovium after Igor Vasilyevich Kurchatov, a pioneering Russian nuclear physicist who led the project to make the first Russian atom bomb. After much dispute, IUPAC, the institute who officially names new elements, selected the name Rutherfordium. 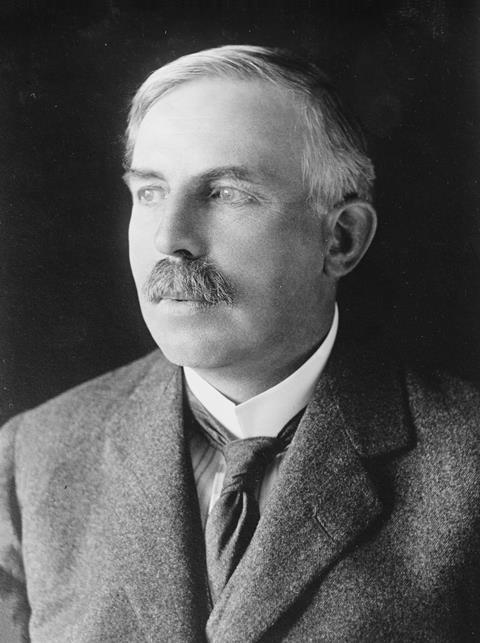 Because it has been around for longer and its isotopes are better known, more is known about the chemistry of Rutherfordium than of any succeeding element. Working with rutherfordium requires specialist methods and knowledge, as it involves working with tiny quantities of very short-lived, radioactive atoms. This means that as soon as a new atom has been made, it has to be whipped away from the action before it decays. So new atoms of rutherfordium have to be collected as soon as they recoil from the target, and then be transported by an aerosol before being chlorinated and chromatographed before passing to a detector. It has been found that in solution, rutherfordium behaves very similarly to zirconium and hafnium, but unlike the trivalent actinides, leading chemists to concluded that rutherfordium belongs in the same group as Zr and Hf, rather than being a kind of super-actinide.

So even though it is extremely unlikely that enough of any rutherfordium compound is going to be isolated in visible quantities, we do know enough to see which family Rutherfordium belongs in. That's another triumph for our understanding of the Periodic Table.

Triumph indeed when the half lives of the isotopes involved are a matter of seconds. That was Uppingham School's Simon Cotton with the chemistry of the first transactinide Rutherfordium. Now next week an element that some may unfairly consider useless when it certainly does have its uses.

For a long time thulium was a Cinderella substance. There was nothing you could do with thulium that couldn't be done better and cheaper with one of the other elements. It's notable that one science writer has said of thulium 'the most surprising thing about it is there's nothing surprising about it.' But that's a little unfair. Thulium 170 with a half life of 128 days, produced by bombarding thulium in a nuclear reactor, has proved a good portable source of X-rays. It was first suggested for this role in the 1950s and has frequently turned up since in small scale devices, such as those used in dentist's surgeries, but also find it cropping up in engineering, where the X-rays can be used to hunt for cracks in components.

And join Brian Clegg to find out how this rare earth element was discovered and why it's considered more valuable than platinum in next week's Chemistry in its element. Until then I'm Meera Senthilingam and thank you for listening.