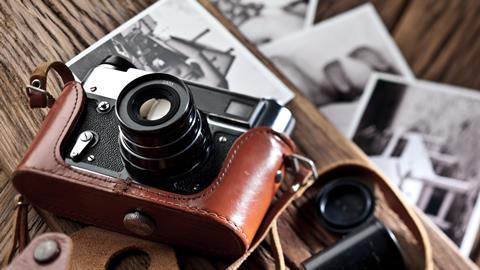 This week, we're capturing the moment. So all together now - say 'cheese!' Here's Phillip Broadwith:

In the age of digital photography, where every mobile phone has a camera built in, it's easy to forget that the whole phenomenon was only made possible because certain chemicals react to light.

In the late 19th century, anyone wanting to pursue the latest photographic craze had to be able to handle a bewildering array of chemicals to prepare, fix and develop photographic plates. Often, each photographer would mix their solutions to a unique recipe, tweaked as their experience grew. But the vital ingredient was something that could change colour when the shutter was opened to record the subtle differences of light and shade in front of the camera. 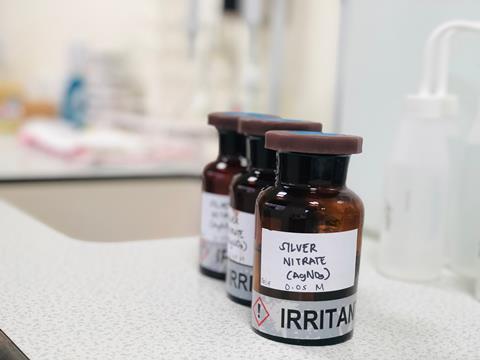 Silver halide salts are ideal - when illuminated they rapidly turn black as they decompose to silver metal. The problem from a photographer's point of view is that they are insoluble, so they're difficult to apply in thin films to photographic plates; and too sensitive, so can't easily be stored for a long time. The answer? Silver nitrate, AgNO3.

Silver nitrate itself is not light-sensitive enough to be used directly in photography, but this becomes an advantage when it comes to storage. However, it is soluble and easily displaces other metals from their salts, so the sensitive silver halides could be produced just before being popped into the camera.

In the earlier 'wet plate' processes, solutions of salts like potassium bromide were applied to glass plates, which would then be dunked into a silver nitrate bath to displace the potassium with silver before exposing it in the camera. The whole process needed to be done while the plate was still wet, which was fiddly and meant that taking a camera on holiday was a major undertaking. It required a trunkload of chemicals; a large camera mounted on a heavy tripod; a tent to keep everything dark while the plates were prepared, exposed and developed; and probably a mule or some kind of vehicle to carry it all in. There were other drawbacks too, silver salts stain skin a brownish black colour, which can't be washed off until the skin dies and sloughs away. 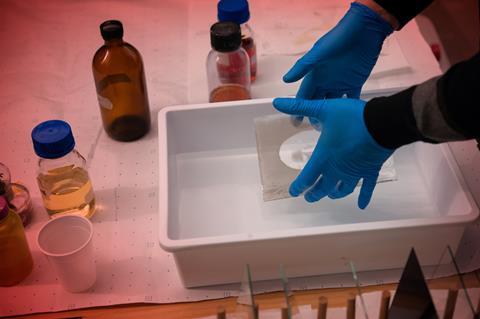 All of that changed when an American called George Eastman invented the Kodak process in 1880. Many photographers of the time were experimenting with dry glass plates, and Eastman developed a particularly effective way of immobilising silver salts on plates using gelatine - the same protein that gives jelly its wobbly consistency. The same silver chemistry was needed to make the sensitive silver halide salts, but the plates remained just as sensitive to light once they dried - as long as they were kept in the dark.

But it was Eastman's next development that really brought photography to the masses - flexible photographic film. In 1888, Eastman marketed the first Kodak cameras, with the slogan 'you press the button, we'll do the rest.' Anyone could buy a camera, take a series of pictures, then send it back to the company to be developed.

As photographic film became more complex, introducing different compounds to make colours and ever faster and finer quality crystals to make sharper images, it still relied on silver salts. And these salts were almost invariably prepared from silver nitrate - its solubility and lower sensitivity to light making it ideal for the job. 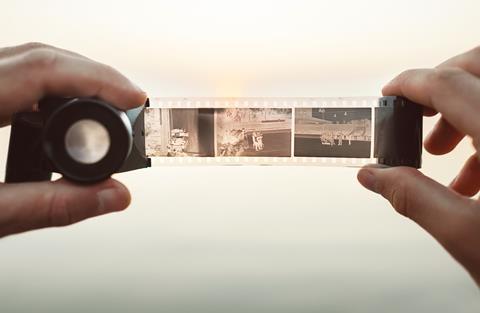 But the connection between silver nitrate and light doesn't end there. If you want to make a glass surface into a shiny, reflective mirror, one way to do it is to coat the back side with silver metal.  But how do you get the silver on there? Once again, silver nitrate provides the ideal solution. If you dissolve silver nitrate in water and add sodium hydroxide, you form silver oxide. Adding ammonia then converts this into a diammine-silver(I) complex - a silver 1+ ion bonded to two ammonia molecules.

Adding sugar to this mixture reduces the silver to its lustrous metallic form, and deposits it on the surface as a perfect, shiny mirror. This is a variation of the Tollen's reagent analytical test for an aldehyde, often called the 'silver mirror' test and familiar to many people from their schooldays. It can be used to distinguish between ketones and aldehydes, since aldehydes are much more easily oxidised to carboxylic acids. The clear, colourless reagent will remain unperturbed in the presence of a ketone, but add an aldehyde and the inside of the test tube is quickly coated in a layer of shiny silver metal.

So after you've all taken a moment to check your hair in the mirror, I'd like to record this moment for posterity, to reflect on a compound that's intimately involved with the way we see our world - smile, everyone!

Hmmm, I do hope they caught my good side. Chemsitry World's Phillip Broadwith there, preserving your memories with the soluble and displacing chemistry of silver nitrate. Now, next week, a  compound akin to an architectural wonder.

The crowning achievement of Montreal's 1967 World Fair was an architectural masterpiece named 'the Biosph?re'. Standing over 60 metres high, the steel frame of this geodesic dome was covered in an acrylic skin that made it glow with an other-worldly quality. Among the many millions of visitors to the site during the 185-day exposition were Grace Kelly, Jackie Kennedy, Bing Crosby and Queen Elizabeth II. None could have failed to marvel at the Biosph?re, which loomed like a giant bubble above the horizon.

Meera Senthilingam
And find out just how this biosphere inspired the naming of the now commonly known Buckyball, and the role of this carbon compound in the field of nanotechnology, Join Hayley Birch in next week's Chemistry in its element. Until then, thank you for listening. I'm Meera Senthilingam.