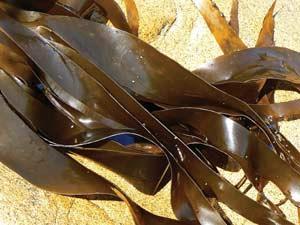 When Brian Clegg’s acid reflux strikes, he knows he can rely on help from this compound: Sodium alginate

This week, a compound Brian Clegg is thankful for, and you may be too.

Like many others, I have regular occasions to be thankful for sodium alginate. When acid reflux strikes, this gelatinous substance works alongside conventional antacids by acting as a barrier to prevent stomach acid from making its way into the oesophagus.

The acid form, alginic acid, is a polysaccharide – a long chain, carbohydrate polymer with a repeated formula of C6H8O6. Although it is also found in soil bacteria, as the name suggests, the main source is algae, specifically brown algae, which is a group that includes many of the seaweeds, like kelps, found in chilly northern seas. The alginate performs a similar role in the seaweed to cellulose in plants and to the cosmetics industry’s favourite additive, hyaluronic acid, in animals, providing a structural matrix to support cells. 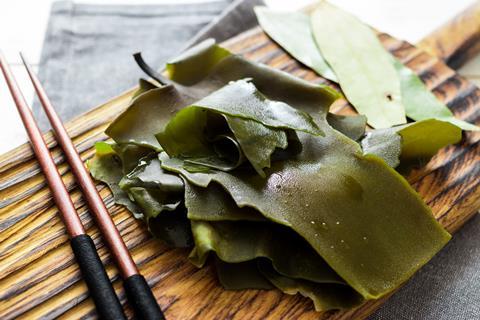 Sodium alginate was first described by the British chemist Edward C C Stanford in 1881, when he patented its extraction from seaweed. Seaweed is not easily cultivated, so the wild weeds are still collected in the production process. The acid is extracted from seaweed in a messy procedure that converts the acid to the sodium salt, which then has to be extracted from a thick slurry that is too gelid to filter as it stands, and has to be heavily diluted – even then it can be difficult to remove the unwanted residue without extra processing. The resultant sodium alginate can then be used or reacted to produce other useful salts like potassium and calcium alginates.

The production process might seem like hard work, but alginates have proved surprisingly useful, particularly as they can provide a variety of more or less elastic gels depending on the exact molecular structure of the alginate. Not only does sodium alginate find its way into my indigestion remedy, it is widely used in food manufacturing to thicken products like ice cream and to act as a slimming aid. In this role, the dehydrated alginate, which absorbs water quickly, expands in the stomach to give dieters the impression that they are fuller than they really are. Think of any gel-like food substance and alginates may well play a role, from the fake cherries used by bakers to a stuffed cocktail olive.

Alginates turn up in the leading edge of molecular gastronomy

Food isn’t their only role, though. The medical profession has used alginates for a long time. Dentists, for instance, employ alginates when producing teeth impressions (from which it deviates into a wide range of craft moulding processes), while calcium alginate is used in burn dressings, where its powerful ability to absorb liquid seems to both help the burn heal and make it less likely to adhere to the dressing.

Calcium alginate also has a valuable role in immobilising enzymes. These valuable natural catalysts are used in a wide range of applications from the production of lactose-free milk to biological detergents, but in isolation they can be over-sensitive to variations in working conditions. In some processes, the aim is to recover the enzyme for reuse, which can be difficult to do. By attaching the enzyme to calcium alginate, the gel will hold the enzyme in place and make it more robust. In laboratories, the same process is used to immobilise or encapsulate whole cells, a process that could be used for timed delivery of drugs, which are gradually released from the encapsulation, or in tissue engineering. 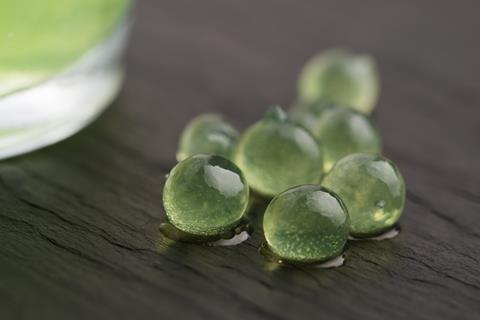 The presence of alginates in food might often seem to be involved with the less sophisticated end of the market. They are used to make fake chunks in animal food, pie fillings and reformed meat. But alginates also turn up in the leading edge of molecular gastronomy, where the likes of Heston Blumenthal pick up on a technique devised by Unilever and adapted by Spanish chef Ferran Adrià to make caviar-like balls of liquid surrounded by a gel shell. The technique, known as spherification, involves adding sodium alginate to the ‘payload’ liquid. A large drop of the resultant mix is then dripped into a bath of calcium chloride. The sodium alginate keeps the drop together as the outer surface reacts with the calcium chloride, converting the alginate into a three dimensional mesh that produces a thin, rubbery shell. More exotic shapes are made by freezing the payload before reacting it with the calcium chloride bath.

It might seem that a substance produced from seaweed is hardly going to be a feature of the latest culinary ventures, but alginates are as versatile as they come – a gel that is set to help in a multitude of fashions. And my stomach, for one, is very thankful for it.

Science writer Brian Clegg there, with the chemistry of alginates. Next week, an icon of the 80s.

In Oliver Stone’s 1987 movie Wall Street, the anti-hero Gordon Gekko delivers classic one-liners such as ‘Lunch is for wimps’, but there is also an image that technology geeks are not likely to forget.

Discover what with Lars Öhrström in next week’s Chemistry in its Element. Until then, thank you for listening, I’m Meera Senthilingam.