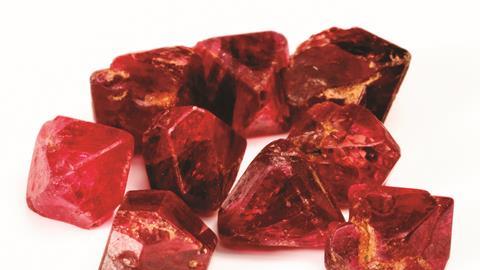 Find out about the Black Prince’s ruby, which is no ruby at all

This week, Neil Withers casts a critical chemist’s eye over the crown jewels…

The Black Prince’s Ruby is the centrepiece in the Imperial State Crown, itself the largest and most often worn of Britain’s crown jewels. The queen wore it as she left Westminster Abbey for her coronation, and wears it every year at the state opening of parliament. 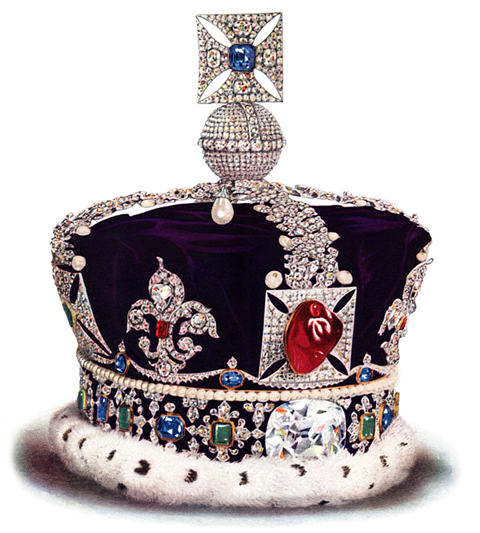 The crown is nearly 200 years old as it was made for Queen Victoria’s coronation, but the stone itself is much much older. Nobody knows exactly where it was mined, or how it came to be in the possession of a prince of Granada, Abu Said. Legend has it that Don Pedro the Cruel, ruler of neighbouring Castille, killed Said in order to get his hands on the jewel. Later, in a civil war with his brother, Don Pedro had to enlist the help of the Black Prince, Edward of Woodstock. He was the eldest son of Edward III, king of England, and was ruling his father’s lands in Aquitaine, southwest France, at the time. After helping Don Pedro put down the rebellion, the Black Prince demanded the enormous ruby in payment.

After the Black Prince died in 1376, the stone passed into the hands of the king and is next recorded some 50 years later, being worn by Henry V at the Battle of Agincourt. The stone then enjoyed several hundred years more peaceful use on royal crowns.

So what’s a spinel, and how is it different to a ruby? Rubies are aluminium oxide, Al2O3, with the red colour provided by chromium. Spinel, on the other hand, is magnesium aluminium oxide, MgAl2O4. 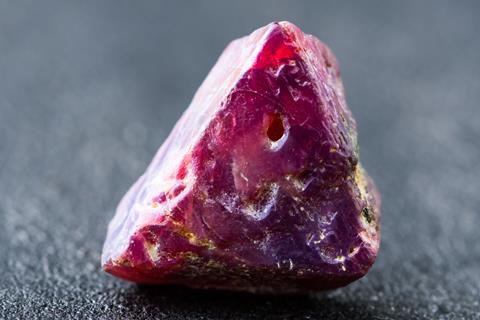 Many of the famous and valuable rubies of history are actually spinels, it turns out – but nobody could tell the difference until French mineralogist Jean-Baptiste Romé de l’Isle came along in 1783. Inspired by Linnaeus’ classifications in biology, he sought to do the same with minerals and crystals. Using the newly invented goniometer – a device for accurately measuring angles, in this case between two faces on a crystal – he discovered that

In all crystals of the same substance, the angles between corresponding faces have the same value.

Romé de l’Isle therefore reasoned that these two similar red minerals, ruby and spinel, with different angles between their faces, are in fact different.

We now know all about their different compositions, structures and properties. The spinel structure is a classic of solid-state chemistry – in fact, a post-doc in my lab once told me during my PhD ‘You can’t call yourself a solid-state chemist until you’ve worked on a spinel’! The structure has aluminium ions in some of the octahedral spaces of close-packed oxygen atoms, and magnesium in some of the tetrahedral ones. Some of the spaces are left empty. There are spinels with iron and chromium in the octahedral sites, and any number of compounds with different metals in the tetrahedral sites, from beryllium to zinc.

In fact, magnetite, Fe3O4, is a spinel – some of the iron is in the +2 oxidation state and in the octahedral sites, while the rest is +3 and in both octahedral and tetrahedral positions. Magnetite is the most common naturally occurring magnetic material, and was the first magnetic material known to humans. The magnetism arises because the iron(III) ions in the octahedral sites have magnetic spins that are coupled but antiparallel to the tetrahedral ones. As some of the tetrahedral sites are filled with iron(II) ions, the spins don’t cancel each other out, resulting in the bulk magnetism magnetite is known for. Without it, and the compasses and sea voyages it enabled, imagine how civilisation might have turned out – a lot less interesting.

Neil Withers in the beauty and practicality of spinels. Next week, it’s my turn to tell the story of a compound, and I’ll be taking us through the looking glass…

`now I’m opening out like the largest telescope that ever was! Good-bye, feet!’

`Oh, my poor little feet, I wonder who will put on your shoes and stockings for you now, dears? I’m sure I shan’t be able!’

Join me to discover an ancient medicine that could have prevented Lewis Carroll from ever visiting wonderland, by stopping his migraines in their tracks. In the meantime, let me know if there are any compounds you would like to know more about by emailing chemistryworld@rsc.org or on twitter @chemistryworld. I’m Ben Valsler, thanks for joining me.