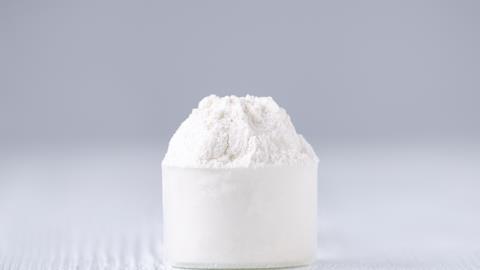 This week, the wonders of modern medicine. Bringing them to us, is Simon Cotton:

In the year 2011, the western world takes good health for granted. That has not always been the case.

I'm not thinking of plagues like the Black Death. I am thinking of the illnesses that were part of everyday life less than a century ago, when in wintertime young children were vulnerable to pneumonia, streptococcal infections of the throat, meningococcal meningitis and the like, often with fatal consequences. There were no antibacterial drugs. With streptococcal infections, tiny infected cuts could be lethal. It wasn't just children who were at risk; women could die from 'childbed fever', puerperal sepsis. In 1924, 16 year old Calvin Coolidge Jr, the son of the president of the United States, got a blister on his toe playing tennis. He was dead within a week from septicaemia. In November 1930, three months after being part of the England cricket team playing Australia in the deciding Ashes Test at the Oval, the Nottinghamshire batsman William Whysall slipped on a dance floor. He grazed his elbow, and died of septicaemia a fortnight later. 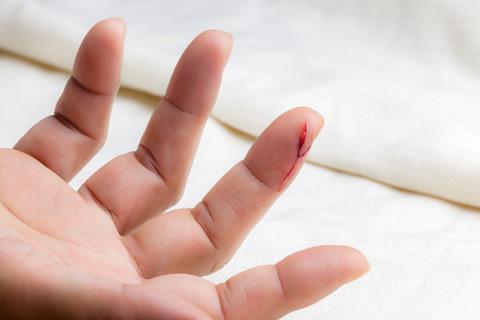 A young German medical student called Gerhard Domagk was wounded at the First Battle of Ypres in autumn 1914 and then served at a field hospital in Ukraine. He saw at first hand the effects of bacterial diseases upon wounded soldiers, particularly gas gangrene caused by the bacterium Clostridium perfringens. 'I swore before God and myself to counter this destructive madness,' he later wrote. After the war, Domagk qualified as a doctor. In 1927 he moved to the chemical company IG Farbenindustrie and began a systematic study of the effect of dyestuffs on bacteria.

Having tested over 3000 different substances, he found that a red dye which became known as prontosil worked well against streptococcal infections in laboratory mice, even at very low doses, though it did not work in test-tube tests against the bacterium. It was tested on humans with streptococcal infections, for which there was no known treatment. These tests went well - the drug was patented in 1934 and went on sale in 1935.

In early December 1935, 6-year old Hildegarde Domagk fell on the stairs at home; when she fell, she drove a needle into her hand. A streptococcal infection set in, doctors were talking of amputation. Gerhard treated his daughter with prontosil and the infection cleared up. A year later, another son of an American president, 22 year old Franklin Roosevelt Jr, became seriously ill with a septic sore throat; prontosil cured him too.

In November 1935, Daniel Bovet and his team at the Pasteur Institute in Paris, France, found that a colourless compound called sulfanilamide worked just as well as Prontosil. It was active both in mice and in test-tubes. It transpired that this was the active agent in the human body, formed from enzymes breaking down Prontosil. There weren't any enzymes around to do this the test tube experiments with Prontosil. Sulfanilamide had two advantages over Prontosil, not only was it much cheaper, but the skins of the patients weren't turned bright red. 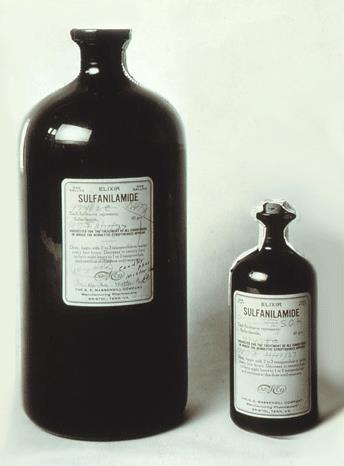 Sulfanilamide was a great success in treating a whole range of bacterial infections, from puerperal sepsis to pneumonococcal meningitis, apart from one tragedy in 1937. An American company made an 'elixir of sulfanilamide' by dissolving it in the toxic solvent diethylene glycol; they added a dye and raspberry fragrance to make it more attractive. No one at the company had done any tests on it, or read about the properties of the poisonous solvent, and over a hundred people were killed, mainly children. The public outcry that followed this ultimately led to the passing of the 1938 Food, Drug & Cosmetic Act, which created safeguards for introducing new drugs in the US.

It wasn't until 1940 that the British biochemist Donald Woods, working at the University of Oxford, discovered how sulfanilamide worked; he found that para-aminobenzoic acid (PABA) stopped sulfanilamide from acting. From the similarity in their structures, he deduced that sulfanilamide binds at the active site of one of the enzymes involved in the synthesis of dihydrofolic acid in bacteria, so the enzyme is inhibited and bacteria cannot grow. Humans don't make dihydrofolic acid, they get folic acid from their diet, and that's why sulfanilamide is safe for humans.

After sulfanilamide, other sulfa drugs with similar structures were made. The British company May and Baker invented M&B 693 - sulfapyridine, and M&B 760 - sulfathiazole. When Winston Churchill, the British prime minister, fell ill with pneumonia in 1943, one of these was used to cure him. Sulfa drugs saved the lives of many soldiers in the second world war; American GIs carried sulfa powder in a first aid pouch, so it could be sprinkled in open wounds.

By the end of the second world war, penicillin had come on the scene, to be followed by other antibiotics; the sulfa drugs dropped out of public consciousness. Nevertheless some sulfa drugs are still used for specialist applications, and it is important to remember that sulfanilamide saved thousands of lives during a decade when penicillin was not available. The sulfa drugs have an honoured place in medical and chemical history.

Indeed, especially if it stops something as small as an elbow graze causing death from septicaemia. That was Simon Cotton, with the life saving chemistry of sulfanilamide. Now, next week a compound playing tricks on your eyes.

Perhaps the most interesting natural form of calcium carbonate is a clear calcite crystal known as Iceland Spar. In 1669, Erasmus Bartholin, a Danish scientist, published the snappily titled Experimentia Crystalli Islandici Disdiaclastici describing a strange behaviour of Iceland Spar. When a block of the crystal is placed over an image, two copies of the image appear through the block. What Bartholin assumed was that two different types of light were being refracted to different extents. In a sense this is true, except that the two 'types' of light are simply polarised in different directions.

And to find out where else calcium carbonate can be found, including giant horses in the British countryside and the fragile casing of eggs, join Brian Clegg in next week's Chemistry in its element. Until then, thank you for listening. I'm Meera Senthilingam