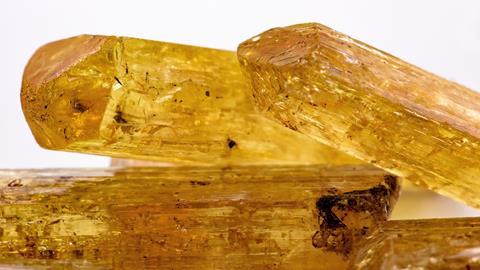 A tale of adventure on the high seas, and the treasured topaz spoils

This week, a sparkling mineral and a tale of derring-do, with Mike Freemantle.

In the Age of Sail, HMS Endymion was the fastest of all the ships in the British Royal Navy. It was launched in 1797 and sent on active service against France during the French Revolutionary Wars, which continued until 1802. During that time, it captured a number of enemy ships. 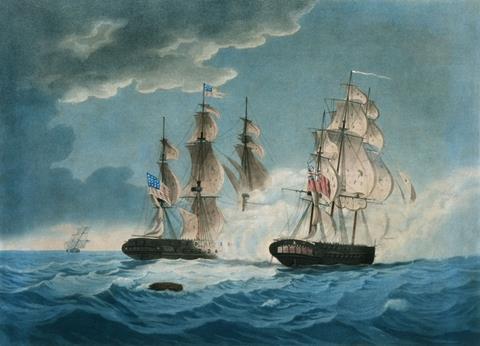 A Thomas Butterworth painting depicting the HMS Endymion and USS President at around 7:00 pm on the night of January 15th, 1815 when the ships turn to the South and brailed up their spankers in order to exchange broadsides.

On one occasion, in May 1800, the Endymion pursued the Scipio, a French privateer that had set out for the Mediterranean from Santander on the north coast of Spain. The Scipio was new, swift, well-armed, and carried a crew of 149 men. During a sudden storm, a 21-year-old officer and four other members of the Endymion crew rowed a small boat towards the Scipio. Taking advantage of the poor visibility, they managed to board and take possession of the ship.

As a reward for his exploits, the officer received £30 – equivalent to over £2300 in today’s money. He used some of the prize money to buy two gold chains with topaz crosses. He sent these as gifts to his two sisters who lived in the south of England. 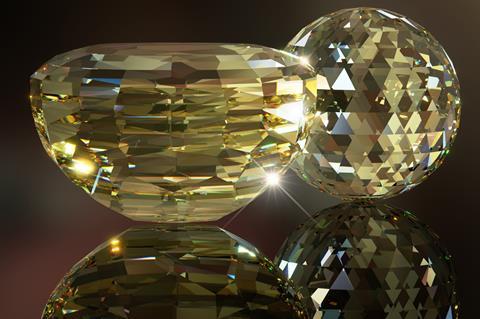 Topaz has been highly valued for its use in gemstone jewellery since ancient times. It is an aluminium silicate mineral containing fluorine atoms and hydroxyl groups, and is one of numerous silicates found in granite and other igneous rocks throughout the world.

All silicate minerals contain silicate anions with tetrahedral structures. Each anion has the shape of a triangular pyramid with an oxygen atom at each of its four corners and a silicon atom in the centre. 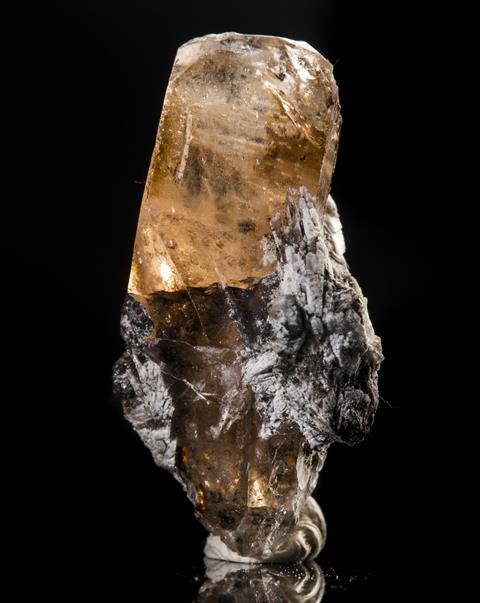 The value of topaz in jewellery derives from its transparency, its durability, and its hardness. On the one to ten scale of mineral hardness known as the Mohs scale, topaz is number eight. That compares with talc, a very soft mineral, at number one, and diamond, the hardest of all minerals, at number ten. The scale is based on scratch resistance – the ability of a mineral to make a visible scratch on a lower ranked mineral.

Pure topaz forms transparent colourless crystals. However, the crystals are often tinted by impurities such as iron and chromium. Their colours typically range from straw yellow to golden brown. Various shades of blue, green, red, and orange are also well known. The colours of topaz gemstones are sometimes enhanced by heat treatment or irradiation. 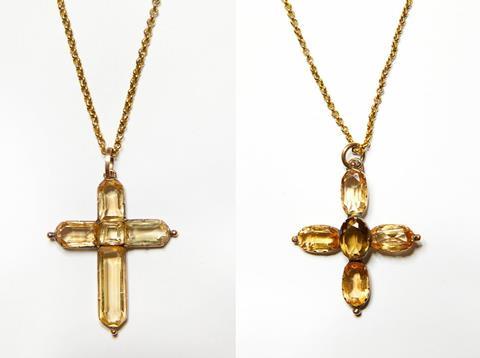 The two topaz crosses purchased by the gallant young officer of the Endymion were golden in colour. You may be wondering who the officer was. He was Lieutenant Charles Austen. You may not have heard of him, but you will certainly have heard of one of his two older sisters. She was the world famous author Jane Austen. The other sister was Cassandra. 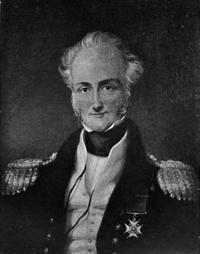 In a letter to Cassandra dated 23rd January 1799, Jane refers to Charles as: ‘our own particular little brother’. On 27th May 1801, she writes to Cassandra:

‘He has received £30 for his share of the privateer and expects £10 more – but what avail is it to take prizes if he lays out the produce in presents to his sisters. He has been buying gold chains and topaz crosses for us – he must be well scolded’.

The crosses are on display at Jane Austen’s House Museum in Chawton, Hampshire. According to Annalie Talent, the museum’s learning officer, the topaz stones are set in gold and of extremely good quality. She points out that the crosses were symbols not only of Jane and Cassandra’s religious faith, but also of their sincere affection for a much loved brother.

As for Charles, he was soon given command of a ship and subsequently rose to the rank of rear-admiral. But that was many years after Jane’s death in 1817.

Mike Freemantle there with a topaz-related tale. Next week, Brian Clegg brings us a compound that defies convention.

When a metal is present in an inorganic compound, we put it in pole position – in, for example strontium chloride or aluminium oxide. It would just feel wrong to make that oxygen aluminide. Which is why strontium aluminate feels a little odd.

Join Brian next week to find out more. Until then, get in touch with any compounds you’d like to hear covered – email chemistryworld@rsc.org or tweet @chemistryworld. I’m Ben Valsler, thanks for joining me.