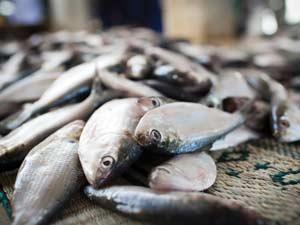 Trimethylamine stinks. Opening a canister of this odiferous gas outside the fume hood will make your lab smell for days. Even cracking the top will aggravate anyone in a ten foot radius. It’s not a smell that anyone would find pleasant. It’s the smell of dead, rotting fish. 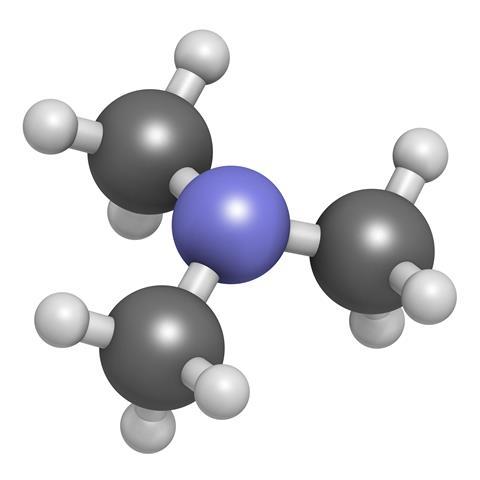 Considering that it gives off such an offensive odour, the molecular structure of trimethylamine is a very simple. It is a tertiary amine where the central nitrogen atom is bound to three methyl groups in a trigonal pyramidal geometry. It’s a gas at room temperature but is highly soluble in water, making for potent aqueous solutions. Because of the lone pair of electrons and electronegativity of nitrogen, trimethylamine is a good nucleophile. Neutral amines are such reactive nucleophiles that nature herself often employs a range of amine side groups that catalyze nucleophilic reactions by accepting protons.

The reason trimethylamine smells so foul is because it is a common product of plant and animal decomposition (and some infections), and it’s thought that we’ve evolved to find these smells repulsive to prevent us consuming rotting food. The oxygenated precursor to trimethylamine is present in fish and breaks down to give that characteristic rotting fish smell. It’s thought that fish and other sea creatures contain this molecule to depress the freezing point of their bodily fluids and prevent urea, also present in the bodies of many sea creatures, from degrading proteins.

Trimethylamine is also released in the bodily fluids of individuals with ‘fish odour syndrome,’ a genetic disorder with the clinical name trimethylaminuria. This unfortunate condition causes body odour, breath, urine, or all three to smell like rotting fish. Those with trimethylaminuria are unable to metabolize trimethylamine from food, and the molecule is thus released unchanged. It has been estimated that only 1% of the UK population are carriers of the trimethylaminuria–causing gene. As of now, there is no known cure for trimethylaminuria; however, suffers may find some relief by regulating their diet to avoid certain foods, such as fish, eggs, liver, broccoli and other dark green vegetables.

It seems trimethylaminuria has been with us for a long time, though the first clinical report wasn’t until the 1970s. William Shakespeare, in his play The Tempest, describes a man of fishy smell: ‘What have we here? A man or a fish? Dead or alive? A fish. He smells like a fish, a very ancient and fish-like smell, a kind of not-of-the-newest poor-john. A strange fish!’

Animals can also have the disease, or something like it. Some chickens have been known to lay fish-smelling eggs and Swedish scientists have discovered the gene mutation in cows to produce fish-smelling milk. 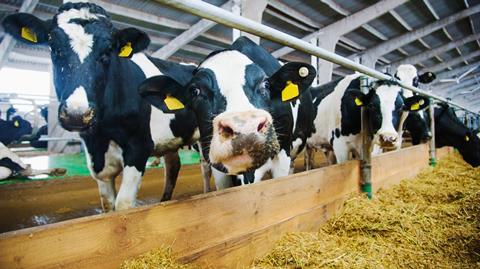 You may be familiar with the popular American television show Breaking Bad. In the show, the lead characters make the drug methamphetamine from phenylacetone and methylamine, an analogue of trimethylamine where two of the methyl groups are replaced by hydrogens. As methylamine is a controlled chemical in the US, several episodes revolved entirely around obtaining the hard-to-get reagent. Methylamine smells just as bad as trimethylamine, so in real life the police often discover labs making meth using the Breaking Bad method because of the tell-tale fishy smell!

Though trimethylamine stinks, it’s a very useful chemical. In the seafood industry, gas sensors designed to detect trimethylamine emanating from their catch are used to determine the freshness of fish. And besides being a common nucleophile, it is also used in herbicides, dyes, anion exchange resins and plant growth regulators. This disproves the old saying ‘you can’t judge a book by its cover,’ or in the case of trimethylamine, its smell.

Science writer Jenna Bilbrey with the fishy but useful chemistry of trimethylamine. Next week, time to be grateful.

Like many others, I have regular occasions to be thankful for sodium alginate.

And you will have to join Brian Clegg next week to find out why. Until then, thank you for listening, I’m Meera Senthilingam.