Climate change is perhaps the greatest environmental crisis that the human race faces in the 21st century, requiring an interdisciplinary, intergovernmental and international solution. Levels of carbon dioxide have been steadily rising over the past decades, with an estimated increase of 2% in 2017, despite multiple initiatives aimed at limiting emissions.

Global warming is indeed a global crisis. Emerging industrial nations such as China and India have powered their industrialisation with fossil fuels. As a consequence, they are quickly becoming the largest contributors to carbon dioxide emissions alongside other developed and industrial nations.1 The World Health Organization has estimated that between 2030 and 2050, the effects of climate change will lead to approximately 250,000 additional deaths as a result of malnutrition, malaria and heat stress.

Such a threat, therefore, requires a global solution. The challenge is finding one that receives unilateral agreement across multiple countries, industries and academia. These three bodies form essential cogs in a machine that can help to generate solutions to reduce the total quantity of carbon dioxide in our atmosphere. CO2Chem is a network of academics, chaired by Peter Styring from the University of Sheffield chemistry department. It aims to use government funding to research sustainable solutions that can be used by industry to lead to a low carbon future.

The large reservoir of carbon dioxide now present in our atmosphere, alongside other gases including water vapour, contributes to the greenhouse effect. This is the phenomenon where heat radiated from the surface is confined to the atmosphere and leads to global temperatures rising. In addition, an escalation in disruptive and unexpected weather has been attributed to global warming. In order to reach the global target limiting the world’s temperature rise to 2°C, it has been reported that CO2 emissions must be cut by at least 50% by 2050.2 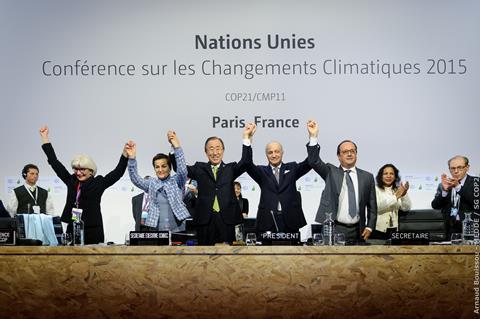 The increase in carbon dioxide is now widely recognised as the major contributing factor to global warming. As a result, initial steps have been taken by many nations pledging to cut carbon dioxide emissions over the coming years. The Conference of Parties (COP) of the United Nations Framework Convention on Climate Change began in 1995 to review, implement and assess the progress in climate change and to establish legally binding obligations from consenting countries. COP 21 resulted in the Paris Climate Agreement,3 which was signed in 2015 and directed nations to initiate ventures that curbed the global temperature rise to below 2°C higher than pre-industrial levels, while also pursuing efforts to limit the temperature rise to 1.5°C. This particular agreement has unfortunately recently received negative coverage following US president Donald Trump’s decision to withdraw from the agreement. His decision makes the United States the only country in the world outside of the agreement.

However, simply eliminating all processes that produce carbon dioxide is an impossible task. Modern industrial society relies too heavily on the products that are the result of processes that produce carbon dioxide. Its release can be a natural phenomenon as well, for instance during forest fires and volcanic activity, but it is widely accepted that human activities are the major contributors: exhausts from vehicles powered by gasoline and burning fossil fuels such as oil, gas and coal. In fact it has been reported that 40% of carbon dioxide emissions originate from fossil-fuel power plants.4 Eliminating the source of these emissions is not possible, given the essential nature of industrial processes. Alternative solutions must therefore be sought. 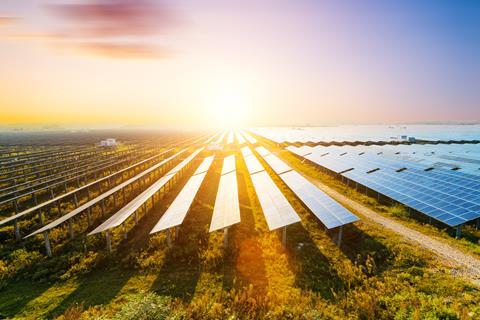 There are various solutions to the excessive generation of carbon dioxide and multiple research avenues are being pursued across both industry and academia. One example that has received considerable interest from industry, academia and government over recent decades is the pursuit of renewable sources of energy. Solar cells and wind farms are now commonplace across the globe, with China investing heavily in clean energy technologies. Between April and June 2017, renewables accounted for nearly a third of the UK’s electricity.

While its use has certainly increased in recent years, renewable energy has yet to completely replace fossil fuel generated energy and carbon dioxide is still emitted through other means, such as vehicles. In this case, renewable-powered hybrid and electric-powered vehicles are certainly on the rise with the aim of addressing carbon dioxide emissions from motor vehicles. However, a vast reservoir of excess carbon dioxide still exists in our atmosphere that needs to be dealt with.

These methods rely on applying carbon capture technology in power plants or industrial processes before it can be emitted. Capture technologies can be broadly separated into three types.5 Post-conversion capture, where the waste carbon dioxide is separated from a gas stream. Pre-conversion capture, where it has been produced as an undesired intermediate by-product that must be removed. In both pre- and post-conversion, carbon dioxide can be captured using various methods of absorption and adsorption, for instance absorption by chemical solvents or adsorption onto porous organic frameworks. The final type is oxy-fuel combustion capture, where fuel is burned with pure oxygen, producing high purity carbon dioxide emissions free from nitrogen compounds.

Once captured, carbon dioxide is compressed and prepared for transportation, before it is either be stored or used. The most common storage location is within geological reservoirs. However, there is a series of challenges that must be addressed before CCS is considered to be the solution to the global crisis, including the method of storage and the cost of injecting carbon dioxide into bedrock. One of the main economic barriers is that there are few financial incentives to sequester the gas, which has made developing and deploying CCS slow.

A viable alternative to storing carbon dioxide is to use the carbon as a so-called C1 feedstock to create various useful products including petrochemicals. CCU uses similar capture technology to CCS, but once captured, the carbon dioxide is utilised as a carbon source in chemical reactions.

At their heart, the majority of organic syntheses rely on the formation of carbon–carbon bonds. Organic chemists have a variety of tools at their disposal, from the Wittig and Grignard reactions, to the Nobel prize winning cross-coupling and olefin metathesis reactions. The advantage of utilisation over conventional storage options is the financial incentives for industries to adopt these practices. By using carbon dioxide as a sustainable chemical feedstock, useful petrochemicals or commercial chemical products can be generated with the added advantage of removing and utilising the vast reservoir of carbon dioxide. As it becomes more difficult to source the environment’s raw materials, recycling carbon dioxide into our chemicals will become a more attractive alternative for industry.

Before discussing some of the uses of carbon dioxide, the elephant in the room must be addressed: its stability. This is what makes it so persistent in our environment and atmosphere. It has very low chemical activity, which prevents it undergoing many chemical reactions. However, carbon dioxide can be activated to render it reactive and subject to many of the useful reactions it is used for today. One of the most common methods to achieve activation is via catalysis.6 But the underlying thermodynamic stability of carbon dioxide means even catalytic methods require external energetic input. Therefore, to mitigate the perpetual cycle of generating further carbon dioxide to activate it, it is now widely recognised that renewable sources of energy must be used to power this activation step.

Once activated, carbon dioxide is a versatile chemical feedstock that has proven utility across a variety of industries. It is used directly in the food and drinks industry as a carbonating agent, preservative and packaging gas.7 It has also been used as a potential chemical reagent in the petrochemicals industry; for example, in the synthesis of methanol, an important industrial chemical intermediate that is increasingly being used as a fuel for transportation.8 This technology therefore essentially converts gases from the air into useful fuels.9 Furthermore, carbon dioxide can undergo a variety of reactions such as carboxylation to make carbonates, acrylates and polymer products. 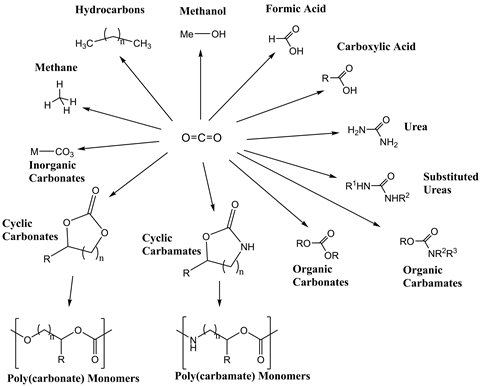 But the energetic costs of carbon dioxide activation must be weighed up against the value in synthesising any petrochemical. This cost could undermine the industrial viability of any of these reactions. Furthermore, typical petrochemicals have relatively short lifespans, resulting in the emission of carbon dioxide when the product is incinerated or has outlived its usefulness. As a result, products with longer lifespan are being sought.

Mineral carbonation is one such chemical process that consumes carbon dioxide while also producing useful commercial products. Calcium and magnesium are found around the world in many naturally occurring silicate minerals, such as serpentine and olivine. The formation of carbonates is favourable and exothermic too, as they have lower energy states compared to carbon dioxide.10 But nature is often not so forgiving. Olivine and serpentine must first be prepared prior to carbonate formation. This can be a single step process, for instance in the carbonation of serpentine (Mg3Si2O5(OH)4), which gives magnesium carbonate, silica and water. 11

However, carbonate formation can also be a multi-step reaction that would typically involve the separation of the metal from the mineral matrix. This is generally an arduous process but ultimately yields highly stable long-term storable carbonate products. Carbonate materials are also useful across various industries, from cosmetics and pharmaceuticals to refractory bricks.12 But there are still a multitude of industrial challenges to overcome: carbonate formation is not yet viable on an industrial scale because the energetic costs are simply too high. With further research, this will become a more viable option for sequestering carbon dioxide.

CCU, CCS and renewable sources of energy are three viable solutions that address the growing environmental crisis attributed to excess carbon dioxide emissions. It is through working together with industrial partners, government and independent lobbyists across the globe that any solutions can impact the wider world and address the biggest environmental issue of our decade. The University of Sheffield is continuing to advance research that seeks to answer the environmental challenges of the future. The processes of carbon capture, utilisation and storage will fundamentally be improved to the extent where carbon dioxide can become not the driver of climate change, but a chemical feedstock that helps to create useful commercial chemical products. By addressing these environmentally critical issues head-on, solutions can be developed that ultimately lead to a greener and more sustainable global future.