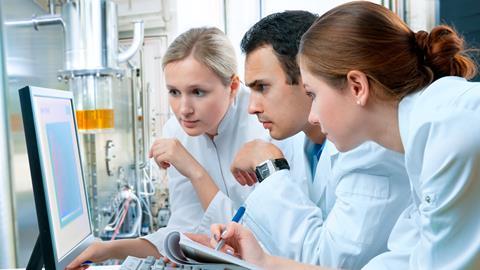 Planning how to make a molecule is often a difficult process requiring great skill, patience and an equally adept memory. But now a new computer program can sift through millions of chemical reactions to plan a synthesis in a matter of seconds.

Chemists often map out a series of complex chemical reactions under a variety of experimental conditions to make a molecule. Such planning involves plenty of trial and error, with countless hours spent consulting the literature before the synthesis is even attempted.

But chemists are now seeking to ease this process with automated synthesis-planning software. The latest example, Syntaurus, can map out a pathway in seconds – even if the target molecule has never been synthesised before. These algorithms typically rely on thousands if not millions of manually-encoded chemical rules to root out all possible options before ranking the most promising synthesis.

‘Techniques in molecular informatics and computational chemistry are now so advanced that it is hard to imagine a new chemical synthesis that is not computer-aided,’ explains Jonathan Goodman, a synthetic chemist from the University of Cambridge, UK, who was not involved in the research.

Mark Waller from Shanghai University, China, and his colleagues have now produced a tool they hope can further help chemists find a quick synthesis solution. The team’s algorithm is similar to the one used in Google’s AlphaGo – an AI that beat the world’s best Go player earlier this year. AlphaGo used a form of machine learning known as a Monte Carlo Tree Search (MCTS) to win the game.

Waller’s MCTS program breaks down a target into thousands of possible nodes, in this case chemical transformations. After this step, the algorithm assesses which one will most likely bring success, and explores this ‘branch’ further. With a database containing 12 million known reactions, the platform determines whether this pathway will work before recording the outcome and repeating the process. Over time, the MCTS will build a series of branches and work out which one is the most viable synthesis.

Waller’s group used this MCTS algorithm to map out a six-step synthesis for an Alzheimer’s drug intermediate – a benzopyran sulfonamide derivative. It produced the same pathway found in the literature within 5.4 seconds.

Although such rapid retrosynthetic calculations are not necessarily new, the team also wanted to find out whether their software could fool a scientist. The team asked 45 graduate organic chemists to state their preference between two synthetic pathways for nine different molecules in a blind test. In each case, chemists designed one pathway, while Waller’s program formulated the other. Surprisingly, 57% of the chemists questioned preferred the AI’s route.

But there are limits to the algorithm. ‘The method excludes stereochemistry and natural products, both of which are central to organic syntheses,’ comments Goodman. He goes on to explain that substantial evidence is still needed to convince the community. ‘This demonstrates the power of new algorithms to analyse complex chemical data,’ he concludes. ’I hope that it will prove useful for synthetic chemists.’