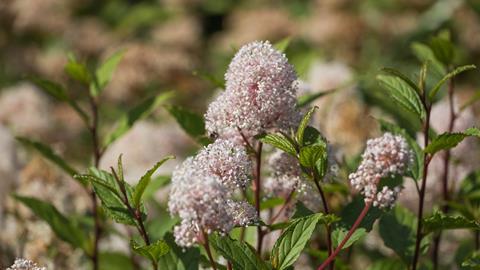 A staple of American folk medicine for many years, red root is used to treat a wide variety of ailments including high blood pressure and lymph system problems. During the American Revolutionary War and American Civil War it became a cheap replacement for Chinese tea. The plant contains a large mixture of alkaloids that are difficult to extract and isolate, among which is ceanothine D.

The role of such cyclopeptide alkaloids in plants ‘has not been totally understood because of their lack of availability from isolation’ explains Madeleine Joullié from the University of Pennsylvania, who led the work. ‘They exist as small amounts of complex mixtures, which depend on the plant species, maturity, location, season etc – and from syntheses that are laborious and low yielding.’

First reported in 1969,2 ceanothine D contains a 14-membered ring, which Joullié describes as particularly challenging to synthesise due to inherent strain in the structure. The molecule also contains a unique chiral tertiary alkyl-aryl ether neighbouring a stereocentre.

Total synthesis of the reported structure of ceanothine D

Joullié’s team previously developed stereocontrolled, regioselective strategies for forming macrocycles with this motif by ring opening an aziridine using different phenols.3 While these reactions had been intermolecular, ceanothine D required the development of an intramolecular variant that formed the required macrocycle and chiral centre simultaneously in the presence of a sensitive Z-enamide. The final structure was obtained in eight steps from a known starting material, a structure that contradicted the findings of the original 1969 study and determined the correct relative configuration of the molecule.

Xavier Franck, an expert in the total synthesis of natural products at the University of Rouen, France, believes that this strategy provides an efficient and elegant answer to a challenging synthesis while also revealing that the proposed structure of the natural product was wrong. He adds that it will ‘certainly [lead to] further developments in the synthesis of complex and biologically relevant cyclopeptides or macrocyles.’

Joullié agrees and hopes that these synthetic advances will afford larger quantities of cyclopeptide alkaloids so that their role in plants is better understood.