Is total synthesis in danger of a decline? Nina Notman investigates 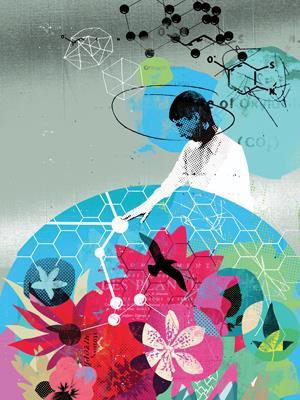 Urea was the first natural product – an organic molecule made by a living organism – to be synthesised in the lab, in 1828 by German chemist Friedrich Wöhler. However, it was the synthesis of the antimalarial drug quinine in 1944, by US chemist Robert Woodward, that heralded the start of the modern era of natural product synthesis.

Since then, thousands of natural products have been isolated from organisms as diverse as humans, marine sponges, fungi and plants. Urea, for example, is found in urine, and quinine in cinchona tree bark. Many of their molecular structures have been elucidated using analytical techniques such as mass spectrometry and nuclear magnetic resonance. And hundreds have now been remade in the organic chemistry lab for a variety of reasons, including drug discovery.

Many natural products have three-dimensional structures containing a multitude of diverse functional groups and chiral centres, densely packed together. This can make it extremely challenging and time consuming to figure out how to remake them in the lab, armed with the tools of synthetic chemistry rather than nature’s enzymes. 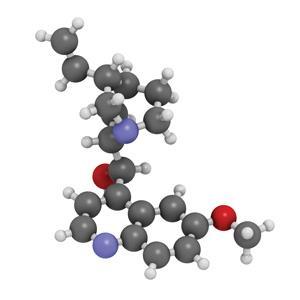 Quinine was first synthesised in 1944...

And the time investment required means funding councils – especially in the UK – are turning away from financing research in this area. In 2011 the UK’s Engineering and Physical Sciences Research Council (EPSRC) announced it would be reducing its funding for synthetic organic chemistry. This was part of a general overhaul – called the ‘shaping capability’ programme – aimed at directing funding towards projects offering quick returns on investment and immediate practical applications.

‘Funders are not currently willing to get behind what is required to do total synthesis,’ says Clarke. It probably takes a decade of work to synthesise a natural product from scratch and then get it into the clinic, he explains. ‘Research councils at the moment are more interested in short returns.’ 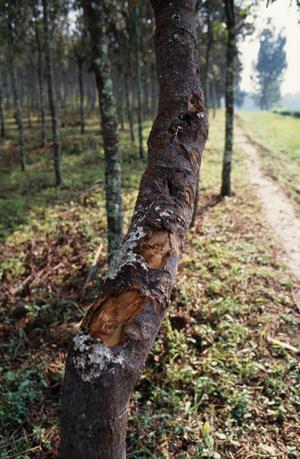 ...marking a transition from making the drug from cinchona tree bark

This disinvestment in natural product research is a very dangerous trend, says KC Nicolaou from Rice University, US, who has been synthesising natural products for over 40 years. ‘If we don’t embrace the value of natural products we will regret it down the road,’ he says.

For example, explains Nicolaou, the current trend of populating drug pipelines with easy-to-make small organic molecules is not working out. ‘93% on average of these drug candidates do not make it to approval,’ says Nicolaou. ‘The natural products offer you more 3D molecules than standard medicinal chemistry,’ he explains. ‘If you have more dimensionality, you often get more selectivity in terms of binding to the intended biological target, and therefore fewer side effects.’

Developing new drugs is not the only practical use for natural products made in the lab. They also enable us to probe fundamental biological questions, helping advance our understanding of the natural world. Some biological molecules are so active that they are only made by nature in very tiny amounts, says Erick Carreira, from the Swiss Federal Institute of Technology (ETH) in Zurich, who has been synthesising natural products for 30 years. ‘If you are going to study them properly, you really need to make them,’ he says.

And while synthesising these molecules for the pharmaceutical industry or biologists may be the most visible applications for this research – and therefore the ones attracting the most funding – there is a more hidden, but equally important, application for this research: advancing the art of organic chemistry.

There was a time when chemists were generally happy to make a natural product target using whatever chemical tools were available. But since the mid-1990s there has been more focus on how good the route taken to the molecules is. This has led to new synthetic methods that have proved useful across the breadth of organic chemistry from drug discovery to materials science. 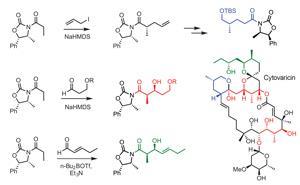 Developing new synthetic methods, for example by David Evans and colleagues, is one of the useful byproducts of total synthesis

Examples include oxazolidinone chiral auxiliaries – developed by David Evans at Harvard University, US, for use in asymmetric alkylation and aldol reactions during the total synthesis of the antibiotic cytovaricin. ‘The Evans methodology is now used throughout the world to make molecules that bear no resemblance to cytovaricin,’ says Clarke.

‘Our understanding of reactivity is also enhanced by natural product synthesis,’ he adds. ‘If you look at Diels–Alder reactions and pericyclic reactions, they were black boxes until Woodward and [Albert] Eschenmoser started on their vitamin B12 synthesis. It was because of the unusual activity they uncovered in that synthesis that Woodward and [Roald] Hoffmann went on to formulate the Woodward–Hoffmann rules.’

‘Natural product synthesis provides a platform for discovering new reactions, which can then be applied to other systems,’ says Clarke. ‘It inspires us to develop routes that make particular functionalities and stereochemical clusters that we’ve not seen before.’

To decide how to make a natural product, chemists look at its structure and mentally unpick it step by step until they get back to commercially available starting materials. It is during this unpicking – or retrosynthetic analysis – that the shortcomings of existing synthetic methods often appear. 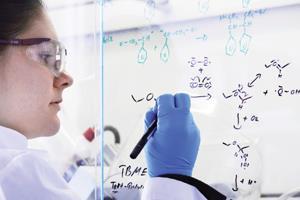 ‘It’s not until you’re trying to take a complicated structure and reduce it down to a feasible 10-step synthesis that you realise there are a lot of problems that remain to be solved if we’re going to be able to make molecules of a certain complexity,’ explains Sarah Reisman, a natural product chemist at the California Institute of Technology, US.

One of Reisman’s goals for any total synthesis is to use as few steps as possible to build complex natural products. This focus encourages her group to develop new methods in the pursuit of natural product targets. ‘If you are really trying to make molecules in as few steps as possible, it forces you to be creative in terms of the chemistry you’ll implement,’ she says.

New methods developed for small molecules are also being applied and tested within natural product synthesis. ‘The most obvious historic example is [alkene] metathesis,’ explains Carreira. ‘Metathesis revolutionised the way one thought of disconnecting all sorts of different molecules.’ Other examples include aryl and arene couplings and arene synthesis.

‘These new tools impact the strategies, making the route shorter, making it more efficient, more atom economical, for example.’ C–H functionalisation is an exciting area of ongoing development, says Carreira. ‘That’s something that is still in its early phases as a methods area, but once that gets wholly worked out you’ll see again a dramatic change in how we construct molecules.’

More new tools expected to make complex molecules more accessible are the transition-metal catalysed cross-coupling reactions of phenol-based electrophiles and tactics for making functionalised heterocycles being developed in Neil Garg’s lab at the University of California-Los Angeles, US. ‘What we do is develop a method and then test it in a really complex setting by building a natural product,’ says Garg. The aim of the transformations his group is developing, he explains, is to build up complexity more quickly and efficiently.

While Garg may pick natural product targets to fit the new methodology his lab has developed, other chemists prefer not to know what they might discover or develop as they set out. ‘When you plan the synthesis, you are just developing a road map,’ explains Nicolaou. ‘You can be sure that along the way you are going to find obstacles, challenging steps that you may have to work around. This field is very much an experimental science and it requires patience, stamina and willingness to stand up when you fall down and redesign and try again.’

You want to have some new chemistry in there somewhere

‘If you come up with a route that is executable right away, then you are not setting yourself up for discovery or surprises,’ agrees Carreira. This trial and error and changing of routes is where the most exciting discoveries are to be found, he says. You also need to be listening to what a complex molecule is telling you it does or doesn’t want to do, he adds, as being too dogmatic about an original idea can lead to trying to fit a square peg into a round hole. ‘It happens often,’ he concedes.

What Carreira is referring to is a desire to have ‘elegant’ synthetic routes. However, elegance in synthesis, as with artwork, is very subjective. ‘My personal view of elegance is  brevity in the synthesis of a complex molecule,’ explains Clarke. ‘A molecule that contains a lot of stereochemistry; that can be put together rapidly, selectively, efficiently, with the minimum corrective transformations occurring later on in the synthesis; and if you can also highlight a new reaction or demonstrate a newly-discovered concept; then that ticks my box for elegance.’

‘You don’t want to have a total synthesis where every step is a named reaction,’ agrees BRSM, a US-based synthetic chemistry postdoc and blogger who contributes to the ‘Organic matter’ column in Chemistry World. ‘You want to have some new chemistry in there somewhere. It doesn’t have to have been developed along the way, it might be some method that’s being applied for the first time, but some degree of novelty and creativity is important.’

BRSM describes elegance as ‘avoiding redundant operations and wasted time by trying to use broad strokes and build the molecule up quickly, rather than putting in a lot of small steps’. He describes atom economy Ê carrying as much of the reactants’ mass as possible into the product – as a useful metric, and says it is great to avoid very heavy or very toxic reagents, but says that most researchers in this field consider elegance and creativity to be the higher goals.

There is also much discussion surrounding whether you should you aim to be the first group to synthesise a natural product or the last, says BRSM. ‘What people mean by that is that if a molecule has never been made before, then being the first to make it is enough: even if the route is horrible, or long, or carries some major flaws. However, if you’re going to synthesise a molecule that’s already been made, then your route really needs to be fantastic. It’s always great to see a later synthesis of a really popular target where you think “no-one’s going to beat that any time soon”.’

Garg agrees that there is merit in coming later to the finishing line. ‘Within total synthesis projects, we always want to be the first ones to finish. But as long as you are doing something unique, you can be the second person to make a molecule and I think our community still values it.’

Planning for the future

Another important role of natural product chemistry is in training the synthetic chemists – both academic and industrial – of the future, explains BRSM. ‘The variety of chemistry is fantastic, one step might be doing palladium chemistry, and the next step could be photochemistry or using enzymes. It’s incredibly good training for a broad experience in the lab,’ he says. ‘The pharmaceutical industry loves to hire people with a background in natural product chemistry because you have done non-stop problem solving for three years.’

Nicolaou, however, worries that the lack of funding for basic research means young people are less attracted to the research field than they once were. ‘My generation went into science for the curiosity. These days a lot of young, highly intelligent, talented people that once would have come to science, now seek to go into medicine, or business school, or finance and things like that,’ he says. ‘We need to attract these people back.’