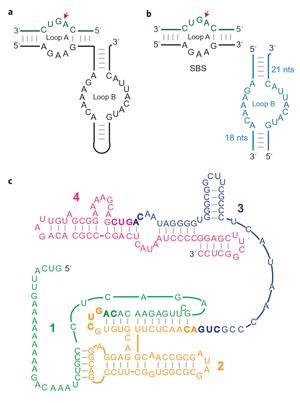 UK researchers have shown repeated cycles of freezing and thawing could have allowed the first complex RNA enzymes, or ribozymes, to form on early Earth – a key step for the evolution of life.1

The work adds to the growing body of evidence for the 'RNA world' hypothesis, which suggests that short sequences of precursor RNA molecules initially formed via prebiotic chemistry before gaining the ability to carry information and catalyse reactions necessary for self-replication.

'To the best of our knowledge this is the first time that complex ribozymes have been assembled from RNA pieces short enough to be prebiotically plausible,' says Hannes Mutschler, lead author of the study at the MRC Laboratory of Molecular Biology in Cambridge, UK. 'It was surprising to see that small RNA pieces together with repeated freeze-thaw cycling would result in such efficient assembly of large RNAs.'

The team took a powerful RNA polymerase ribozyme – a modern analogue of the primordial RNA replicating enzyme – and broke it into short pieces of no more than 30 nucleotides long. They did the same to the hairpin ribozyme, a natural RNA catalyst. Experiments revealed that when subjected to freeze-thaw cycles, the fragments most readily reassembled the polymerase into an active state.

'Our work indicates that very primitive assemblers might have been present in the original pool of short RNAs created by prebiotic chemistry and could bootstrap themselves towards more complex catalytic functions by the formation of assembly networks,' says Mutschler. 'In some cases, this might have resulted in a positive feedback loop in which the assembly product would help to create more of the RNAs that are part of the network.'

'The frame of reference is convincingly prebiotic, which is unprecedented for this type of study,' comments Ernesto Di Mauro, at Sapienza University of Rome, Italy, who earlier this year published the first plausible chemical model of how the first short oligonucleotide sequences might have developed catalytic function.2 'The cyclicity of the physico-chemical processes involved substitutes, as clearly shown, the otherwise needed activation chemistry. And what more natural than freeze-thaw cycles?'