Bimetallic main group complexes can activate aromatic fluorine, a study by researchers in the UK has found.1 The reaction has a mechanism very similar to a typical nucleophilic aromatic substitution with a Grignard reagent and provides a simple route to a number of very rare molecular species – including a new compound with the first ever molecular Mg–Al bond.

Building blocks to make medicines, pesticides, fertilisers and materials often contain fluorine atoms, so chemists are continually on the hunt for new ways to do reactions with organofluorine compounds. Mark Crimmin of Imperial College London and his colleagues had previously found that main group reagents with Mg—Mg bonds could break C–F bonds,2 some of the strongest single bonds known in chemistry, in a reaction similar to the Grignard formation. By expanding this concept to other main group metals, they reveal that C–F bonds react with main group M—M bonds through a concerted mechanism, and the route to rare main group M—M complexes is much simpler than previously thought. 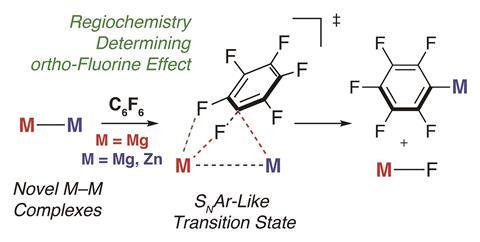 C–F bond activation is dictated by the steric accessibility, and not the polarity, of the M–M bond

Theoretical chemist Gabriel Merino, from the Center for Research and Advanced Studies of the National Polytechnic Institute, Mexico, believes this is an exciting development. ‘Each new compound containing a main group element with a low oxidation state represents a milestone – not just in confirming theoretical predictions, but also in expanding the horizons of such seemingly outlandish structures,’ he says.

Due to their strong polarity, fluorinated aromatic compounds are susceptible to attack by a nucleophile. Crimmin and his team began a computational study to investigate the transition state of a Mg–Mg complex reacting with aromatic fluorine. They calculated the bond lengths and angles in the transition state and found that main group reagents containing metal–metal bonds react in a very similar way to a typical nucleophilic aromatic substitution reaction with a Grignard reagent.

One of the magnesium atoms acts as a nucleophile attacking the aromatic ring, and the other acts as an electrophile, polarising and breaking the C–F bond. Crimmin describes this process as a push–pull mechanism. ‘One magnesium atom pulls a fluorine off of the fluoroarene, and at the same time, the electrons from the magnesium–magnesium bond are pushed into the aromatic system forming the new magnesium–carbon bond,’ Crimmin says. John McGrady, whose research at the University of Oxford, UK, includes main group chemistry, says this is a viable route to C–F activation. ‘It works because you have an extremely reactive reducing agent, primed to donate electron density into the C–F antibonding orbital, and also a second Lewis acid site (the magnesium atom) in the vicinity to catch the fluorine anion as it forms,’ he says.

They tested a range of different fluoroarenes and found that the C–F bond to be broken always had at least one adjacent fluorine atom in the ortho position. ‘Computationally, we found that the ortho-fluorine was required to stabilise the transition state for carbon–fluorine bond breaking. We considered the ortho-fluorine a bit like an anchor, helping to hold the aromatic in place and direct it toward the reactive site,’ Crimmin continues. ‘We hoped that by changing the polarity of the metal–metal bond we’d be able to supercharge the reactivity of the main group complex. Our idea was that if we make it more polar, based on our push–pull mechanism, we should make it more reactive. In fact, just the opposite happened!’

To probe this unusual reactivity further, Crimmin‘s Imperial colleagues Clare Bakewell and Bryan Ward constructed Mg–Al, Zn–Al, Mg–Zn and Zn–Zn–Zn complexes to determine the effect of varying the main group metal. They were surprised to find that sterics were the dominating factor, rather than polarity. Ease of access to the metal–metal bond by the aromatic fluorine dictates the reactivity, and increasing the polarity of the metal–metal bond actually results in less reactive complexes. This is because contracting the metal–metal distance pulls the ligands closer together and limits access to the reactive site. 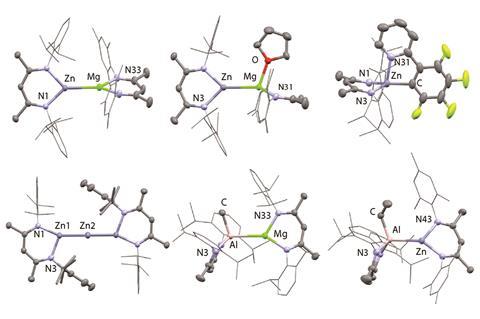 ‘This shows that these species are stable enough to be viable synthetic tools rather than just bonding curiosities,’ McGrady says. ‘They are very reactive – they are essentially trapped Mg(I) intermediates. I think they’re important because they challenge our notions of chemical bonding. We teach undergrads that you can never get Mg(I), but here it is.’

The successful synthesis of these complexes paves the way for new methods to break C–F bonds for organic synthesis. ‘Ultimately, we’d like to get to a point where we can start to think of the carbon–fluorine bond like any other reactive functional group,’ Crimmin says.