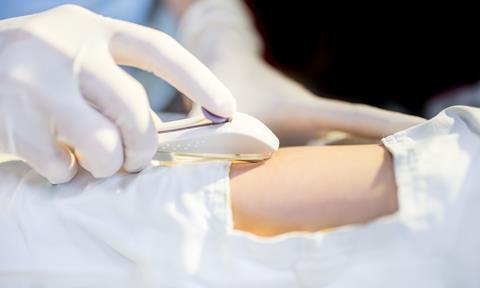 US researchers have used 2D laser induced breakdown spectroscopy (Libs) to visualise how a long-acting injectable implant releases its drugs. The technique could help drug developers check for problems and design better formulations.

Injectable implants can maintain therapeutic levels of a drug in the body for extended periods, allowing patients to avoid daily pill regimes for things like contraception, and HIV and hepatitis treatment. However, since traditional drug release studies only reveal the total amount of drug released over time, scientists still have questions about how sustained-release systems work.

Lanfang Zou and colleagues at Merck & Co have shown that Libs could provide some answers. A variety of fields, including forensics, marine archaeology and Mars exploration, already use Libs. It is also gaining acceptance as an analytical tool in medical circles because of its advantages over other spectroscopic techniques; it’s relatively fast, requires little sample preparation and works at room temperature and pressure.

The dissolution front, shown in blue, progresses uniformly from the edge to the center of the implant

The Merck team followed an active pharmaceutical ingredient (API) at different stages of drug release from an implant. In this case, the API was a nucleoside reverse transcriptase translocation inhibitor with a fluoro-functional group so they measured the atomic emission lines for fluorine to quantify its concentration and location, chemically mapping the drug release from the implant. The resulting images depict a dissolution front that moves uniformly from the outer edge of the implant to its centre.

‘Long-acting injectable implants can maintain therapeutically relevant drug levels in a patient’s body over several months to several years and make a patient’s life much easier,’ says Zou, ‘The developed 2D imaging by Libs allows for a better understanding of formulation homogeneity and the drug release process.’

Matthieu Baudelet, from the National Center for Forensic Science housed at the University of Central Florida, US, says the work is remarkable: ‘Biomedical and pharmaceutical application of elemental imaging is indeed a strength for Libs. Furthermore, fluorine is a difficult element to precisely quantify with any elemental technique. This work should become a new reference for using Libs in fundamental biomedical research.’

Next, the team plan to establish a mathematic model of the drug release process and extend the imaging technique to other dosage forms like tablets and films.