Complex amines made easy (and cheap) 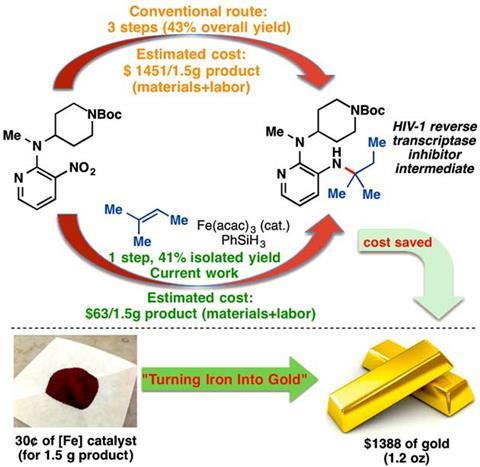 US researchers have discovered a cheap and simple way to make amines – a class of organic compounds that are in high demand for making drugs and agrichemicals.1 The work could streamline amine synthesis, while enabling the production of novel and highly valuable complex amines that were previously inaccessible or too costly to make.

Until now, amines – derivatives of ammonia – could only be made via alkylation or cross-coupling methods. However, using these methods to prepare more complex, sterically hindered amines, which have desirable properties for drugs, was either too costly, inefficient or even impossible.

Now, Phil Baran’s lab at the Scripps Research Institute, La Jolla, has come up with a protocol that repurposes two readily available and inexpensive feedstock building blocks; olefins and nitroarenes, via iron-catalysed cross-coupling.

‘I really don’t know why we discovered this reaction and why it wasn’t discovered 30 years ago,’ says Baran. ‘All the pieces were there. The starting materials are ubiquitous and more widespread than even boronic acids.’

‘It’s as if we’re taking dirt, and then adding a bit of rust, and putting it all in a blender and ending up with gold – except that the amines we can make with this new method are often worth much more than their weight in gold,’ he adds.

Last year, Baran’s lab observed the radical coupling of alkenes using an inexpensive iron salt as the catalyst and a silane as the stoichiometric reducing agent.2 The team then explored how pairings of different nitroarenes and olefins yield different amines and found the reaction produced over 100 different amines, including complex amine-containing compounds with novel functional groups. Importantly, the reaction takes fewer steps than conventional methods and works smoothly under unusually mild conditions.

‘The amazing part of this reaction is that the iron catalyst simultaneously primes both the nitro and olefin to reactive intermediates – a nitroso compound and alkyl radical – and joins them together,’ Baran explains. ‘Other metals are capable of one process or the other, but not both. So that is pretty surprising.’

In further experiments the team used the reaction to make an amine that’s required for an HIV inhibitor drug. The conventional route takes three steps and produces a 43% yield at an estimated cost of $970/g (£620/g). But the new synthesis takes just one step to generate a 41% yield with an estimated cost of $42/g.

‘Industry and also academia will quickly embrace this method as it is operationally simple and does not require extensive screening of ligands and catalysts that is often the case with palladium-catalysed C–N bond forming reactions,’ says László Kürti, a synthetic organic chemist at Rice University, US. ‘The fact that one can make sterically hindered secondary amines in one pot is particularly valuable – many of the products reported by Baran in this paper would be very challenging to prepare using conventional methods. In several cases currently available methods would either work very poorly or fail completely.’