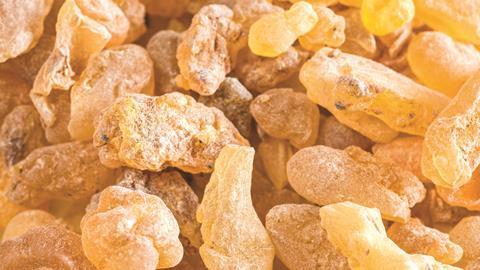 Using the latest analytical techniques, as well as a panel of highly trained human noses, a group of researchers have identified the key odorants of frankincense. They found that two isomers of a rare carboxylic acid, present in tiny quantities, in frankincense essential oil gives the aromatic tree resin the smell that we link with Christmas and old churches.

Frankincense has infused many cultures for centuries. This dried resin extracted from the bark of Boswellia trees is mentioned more than 20 times in the Bible, and is best remembered as reputedly being one of the presents the three wise men gave to Jesus. To this day, frankincense is still used during religious ceremonies.

Cis- and trans-olibanic acids (left) were identified as being behind the distinctive smell of frankincense. Cis-isocascarillic acid (right) was isolated from oranges in 2007

Although frankincense has been used for thousands of years, the exact identity of the compounds that give it its distinctive smell remained a mystery. Because classic techniques like thin layer chromatography, GC–MS or even HPLC were not sensitive enough to identify all of frankincense’s many odorants, the team led by Nicolas Baldovini at the University of Nice Sophie Antipolis in France, used chromatography–olfactometry. This system splits the output of a gas chromatograph into two different lines: a classic mass spectrometry detector, and a sniffing port, where a researcher can smell and hopefully identify the aroma of every peak. For scientists working in this area, the human nose remains a valuable tool and can be more sensitive to certain smells than lab instruments.

Chemists identified two unknown peaks with a smell that was highly characteristic of frankincense in the acidic fraction of the extract, which represents just 0.2% of the oil.  ‘Although it was quite difficult, it was also very hopeful to find an odour zone that had never been identified before,’ says Baldovini. Because these molecules were present in trace amounts, researchers had to refine 3kg of essential oil to obtain just 1mg of them. The team then synthesised the four isomers of 2-octylcyclopropanecarboxylic acid, also known as olibanic acid, to prove that they had correctly identified the two molecules responsible for frankincense’s distinctive smell. ‘These molecules are not commercially available in enantiopure forms, so we had to make them in the lab. We had no other choice,’ adds Baldovini.

Baldovini says that molecules previously linked to frankincense’s smell ‘lack the characteristic, church like smell; actually most of them are odourless’. The only antecedent of a compound with a true olibanum note was a very similar molecule called cis isocascarillic acid isolated from oranges. ‘This molecule probably fits the same olfactory receptor, but nothing like it had ever been isolated from frankincense,’ said Baldovini.

Johannes Niebler, a researcher who has investigated the odour of frankincense at Friedrich–Alexander University, Erlangen–Nuremberg in Germany, remarks that ‘we had unravelled two other highly potent odorants contributing to the smell of Boswellia sacra frankincense, but the main “key” was still missing. This publication closes a big gap in the research on frankincense odorants.’ Niebler is also surprised by the structure of olibanic acids: ‘A ring of three carbons embedded in a fatty acid is quite rare in nature. It seems these compounds may only be found in the botanic genus of frankincense.’