A variety of button mushroom has been engineered not to go brown using the Crispr-Cas9 genome editing tool. The mushroom will not be regulated as a genetically modified organism (GMO) in the US as it contains no foreign DNA, the United States Department of Agriculture (USDA) has said. 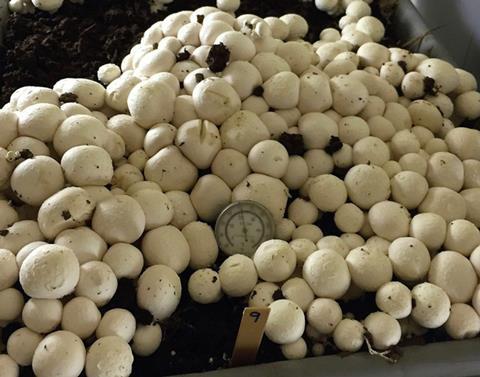 The mushrooms have been modified to not produce the enzyme polyphenol oxidase, which causes them to turn brown in air

Yinong Yang and colleagues developed the anti-browning mushroom at Pennsylvania State University in the US. ‘We used the Crispr-Cas9 technology to create small deletions in a specific gene encoding a polyphenol oxidase (PPO),’ says Yang. This enzyme is responsible for giving mushrooms an unappetising appearance, as it catalyses the oxidation of polyphenols in the mushroom when they are exposed to air, the first step in the production of dark melanin pigments. ‘The small deletions knockout the gene and prevent the synthesis of the PPO, leading to a reduction of overall PPO activity by more than 30%.’

The team used a bacterial plasmid construct to deliver the guide RNA and Cas9 enzyme into mushroom cells and achieve the necessary deletions. The final product does not contain any DNA from a donor or vector organism, so it is not covered by current regulations that control the import, movement or release of GMOs in the US.

In a letter to Yang following a visit to the group’s laboratory in 2015, the USDA said: ‘You describe your Crispr/Cas9-edited mushroom as a having small deletions (1–14bp) in a specific polyphenol oxidase gene but containing no foreign DNA integrated into the mushroom genome.’

‘[The] Animal and Plant Health Inspection Service does not consider Crispr/Cas9-eited white button mushrooms … to be regulated.’

A handful of other GMOs have escaped regulation in this way, although this is the first example involving the Crispr-Cas9 technique. Last year Canadian biotech firm Okanagan Specialty Fruits created anti-browning apples by using gene silencing to reduce the expression of a PPO gene.

Yang says he wasn’t surprised by the USDA decision. ‘Many crops modified by other genome editing tools … have been exempted from the USDA regulation during the past few years.’ He adds that the university is interested in commercialising the product, pending market analysis that will investigate whether consumers are likely to accept GMO mushrooms.

‘The USDA has made a judgement consistent with their own rules, so it is not surprising that they concluded the Crispr modified mushroom is not subject to their regulation,’ comments Jonathan Jones, a plant scientist at The Sainsbury Laboratory in Norwich, UK. ‘Similar mutations in the polyphenol oxidase gene … might have arisen using other, less specific mutagens. I hope this opens the way to more widespread use of this method to improve crops and address the challenge of sustainable intensification.’

Mike Bevan, deputy director of the John Innes Centre, UK, says that the new mushrooms may still need to be assessed for human health and environmental protection issues by the Food and Drug Administration and Environmental Protection Agency. In the EU, he adds, regulatory authorities are still considering where gene editing methods such as Crispr fit in the current legislation. ‘If these new mushrooms came into the EU, they could fall under current GM rules even though there is no evidence to say the lines are any different from a wild mushroom,’ he says.