Researchers studying the Crispr gene editing tool have teamed up with colleagues developing detection methods for the Zika virus to produce a method that is highly sensitive, fast and affordable.

Feng Zhang’s group at the Massachusetts Institute of Technology’s Broad Institute, who first demonstrated the use of Crispr-Cas9 for gene editing in living cells, has shown that a different Crispr system can be used to detect genetic material from disease-causing organisms. The group showed in 2016 that a Crispr-type enzyme now known as Cas13a targets single-stranded RNA rather than DNA, making it suitable for RNA viruses such as Zika and Dengue fever. Cas13a also doesn’t stop cutting once it has destroyed its target, but goes on to cleave thousands of other RNA molecules that happen to be nearby. This collateral damage provides a useful amplification step enabling the sensitive detection of the original target RNA, whose recognition can be programmed just as in the gene editing method.

Aiming to turn this into a clinically usable sensor, Zhang teamed up with Jim Collins, also at MIT, who was involved in the race to develop practical methods for rapid detection of the Zika virus. Between them, the teams added further signal-boost mechanisms to the Crispr-based assay and arrived at a method that could detect fragments of the Zika virus genome at attomolar (10-18 M) concentrations in urine or saliva, providing the sensitivity needed for this pathogen that can become a threat at very low copy numbers. They called their system Specific High Sensitivity Enzymatic Reporter UnLOCKing, or SHERLOCK. 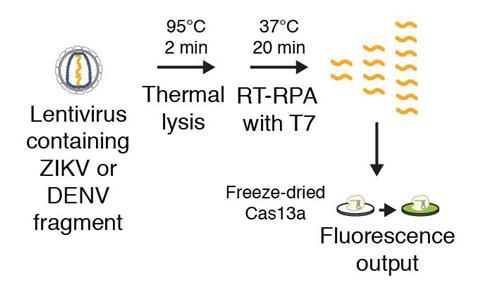 Although existing methods like quantitative PCR (qPCR) are similarly powerful, the researchers envision SHERLOCK being used as a quick, inexpensive and sensitive diagnostic tool to detect infectious disease especially in developing countries, far from medical laboratories. ‘The advantages of our system over existing systems include speed, cost and sensitivity,’ Collins said. They verified that all reagents used could be freeze-dried, enabling them to produce a robust assay on a strip of paper which can be used in field conditions far from laboratory supplies and only costs $0.61 (£0.48) per sample tested.

Mickey Urdea, a bioscience consultant and founder of Halteres Associates in Delaware, US, agrees. ‘This is an interesting combination of existing and new technologies,’ he tells Chemistry World. ‘Indeed, we are all awaiting the introduction of fast, inexpensive, and easy-to-use nucleic acid-based tests with sufficient clinical performance for low resource settings.’