The Ebola epidemic in Africa has loomed large over the chemistry community in 2015, as medicinal chemists found themselves in a race against time in a battle against the deadly disease. In January, GlaxoSmithKline (GSK) tested an experimental vaccine on 60 human volunteers that elicited an immune response on all those it was tested on.1 But the efficacy of the vaccine was quickly questioned as the response was much lower than that exhibited in macaques.

Hopes were soon reignited, however, following a successful Phase III trial of the fast-tracked VSV-ZEBOV vaccine in August.2 Developed by the Public Health Agency of Canada, the vaccine is a live virus containing a small section of the Zaire ebolavirus. Over 4000 close contacts or family members of 100 Ebola patients in Guinea, West Africa, were injected with the vaccine in a ‘ring vaccination’ strategy. All of those who received the vaccination immediately after a family member was diagnosed did not contract Ebola.

Although Ebola vaccination research has been fast-tracked over the past two years, the first malaria vaccine was only approved in July 2015, despite decades of intensive research.3 The European Medicines Agency gave Mosquirix, a malaria vaccine developed by GlaxoSmithKline, the go-ahead after a large-scale clinical trial involving over 15,000 children. But its efficacy has been put in doubt after two World Health Organization (WHO) committees recommended limits on its widespread use in October.

Even so, antimalarial drug research was recognised by the Nobel committee this year, with Youyou Tu being awarded half of the 2015 Nobel prize in physiology or medicine for her landmark work on the antimalarial drug artemisinin. Inspired by the writings of the Chinese alchemist, Ge Hong, Tu extracted the active compound from an ancient herbal remedy, sweet wormwood. The drug has gone on to save around 100,000 lives in Africa every year. The award for Tu was not without controversy in her home country where debate has raged for years over apportioning credit for the discovery.

The other half of this Nobel prize went to William Campbell and Satoshi Omura for the isolation of the anti-parasitic drug avermectin from soil samples in Japan.  These laureates helped to kick start a gold rush in natural product discovery that continues to this day as researchers search for new antibiotics as the world faces a crisis that may kill 300 million people by 2050 if left unchecked, according to a December 2014 study.

With the antibiotic pipeline having dried up since the late 1980s, many have, perhaps, been inspired by the laureates’ methods. We reported this year that Kim Lewis and his colleagues at the Antimicrobial Discovery Center, US, have created the iChip platform – a series of petri dish-like vessels that can be placed in the soil to allow for the in situ growth of bacterial species. Using the iChip, the team found the new antibiotic teixobactin, which may be the first new class to be discovered since 1987.4 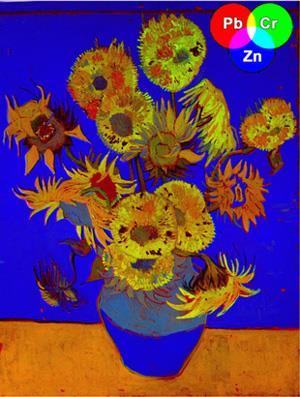 Van Gogh used lead chromate-based pigments (yellow, red and green on this pigment map) to give his flowers their yellow hue

Van Gogh made an indelible impression on modern culture with his art, but scientists in Belgium have discovered that some of his most famous works may be chemically altering over time.

The post-impressionist produced over 800 oil paintings during his most creative period, using a mixture of lead-based pigments when working with vibrant colours. Koen Janssens and his colleagues at the University of Antwerp, Belgium, have identified several works, however, where these pigments are gradually changing colour under sunlight.

The team first examined white globules from Van Gogh’s Wheat stack under a cloudy sky using x-ray tomography.5 The original pigment, red lead or mimium (Pb3O4), was buried deep inside, with an exotic mineral, plumbonacrite, along with carbonates and cerussites, surrounding it. The analysis suggests that red lead converts to plumbonacrite under sunlight, and this reacts with carbon dioxide to produce the white cerussite layer we see today.

Janssen’s team also had a rare opportunity to examine one of Van Gogh’s most famous works, Sunflowers.6 Using x-ray absorption near edge structure spectroscopy, the researchers found the yellow pigment lead chromate, located within the petals, darkens over time, with any chromium reducing from chromium(IV) to chromium(III).

Taking inspiration from nature has also been a theme that has dominated materials chemistry over the past year.

Inspired by the Namib Desert beetle’s ability to survive in arid climates, Peng Wang and his colleagues from the King Abdullah University of Science and Technology in Saudi Arabia found an inexpensive way of creating patterned superhydrophobic surfaces.7 The desert beetle collects moisture on its waxy back, which has a series of hydrophilic bumps, and the water is channelled towards its mouth. Wang’s team replicated this surface by depositing dopamine, mixed with ethanol, onto a superhydrophobic surface using an inkjet printer. The dopamine self-polymerises to form discrete hydrophilic bumps. The researchers hope the manufacturing process could help to produce tailored wetting surfaces in the future. 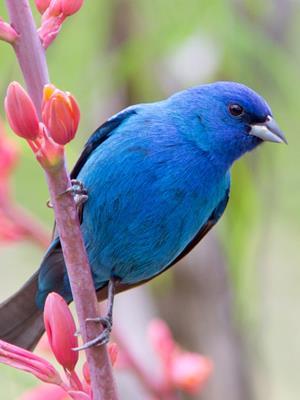 Physicists from the US and South Korea tried to grasp why finely-structured natural and manmade surfaces produce purple, green and blue when light interferes with them, but not red.8 Making a red photonic glass – a structure that produces the same colour independent of viewing angle – from a suspension of solid microscopic spheres, the team found red and blue wavelengths were always produced together, giving off a purple colour. Victor Manoharan at Harvard University, US, and colleagues realised this effect could be suppressed by using hollow spheres instead, thereby allowing a pure red glass to be made. Manoharan believes, now that they have the formula for structural reds, such glasses may find uses in electronic paper displays.

But not all chemists have been mining nature for technological advances; some have simply done so out of curiosity. In March 2015, an international team of chemists provided an answer to a question that has no doubt crossed the mind of many a chef: why does a lobster change colour from dark blue to red–orange when cooked?9 The team showed that protein-bound astaxanthin, which gives lobsters their distinctive dark blue shell, is usually present as a negatively-charged enolate ion. Once heated, the protein denatures, releasing astaxanthin – a common carotenoid that is red–orange in colour. 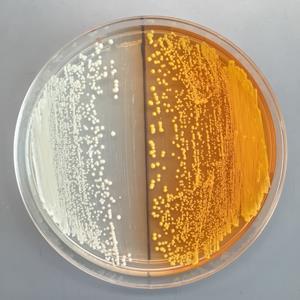 Concerns have been raised over the potential for criminals to exploit opiate-producing yeasts in the wake of research that has successfully engineered such a yeast strain.10

The synthesis pathway for producing painkilling opioids from glucose is 16 steps and researchers have struggled to introduce all of them into a single yeast strain. In May 2015, a group led by John Dueber at the University of California, US, incorporated a tyrosine hydroxylase enzyme into a yeast strain, which can convert tyrosine to L-DOPA11 – a crucial step that had yet to be achieved up until that point.

But three months later, a group based at Stanford University, US, engineered a yeast strain that can perform the entire pathway and produce the opioid thebaine from glucose. Christina Smolke and her colleagues mixed 21 enzymes from a range of biological sources into the yeast Saccharomyces cerevisiae. Smolke affirms that the process could not be used to produce ‘home-brewed heroin’ as the current synthesis only produces very modest yields.

Lobster-curious chemists aren’t the only researchers to have been seeing red this year. Astronomers have been trying to understand the chemical nature of Pluto’s red atmosphere, as well as debating the chemical contradictions surrounding the ill-fated Philae lander’s observations of comet 67P.

After a decade-long journey on board the European Space Agency’s Rosetta probe, which is now in orbit around 67P, the solar-powered Philae lander touched down on the comet’s surface in November 2014. But the spacecraft quickly shut down after landing in complete shadow and was only able to obtain up to 60 hours of observations. 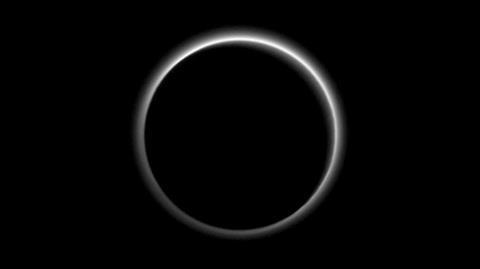 Early indications from the Philae data suggested that there may be organic molecules on the comet’s surface – a possible sign for how life started on Earth. This was swiftly backed up by a flurry of research activity in January 2015, with astrochemists sifting through Rosetta’s preliminary spectrometry data.12 In January, the group responsible for Rosetta’s visible and infrared thermal imaging spectrometer reported a broad spectral absorption band from 2.9µm to 3.6µm – a region indicative of organic molecules that contain carbon–hydrogen and oxygen–hydrogen bonds. The group was reluctant to say that comets could have delivered the building blocks for life to planets, however, as the key ingredient for amino acid formation, nitrogen, was not detected.

Questions over the presence of nitrogen were central to the Rosetta mission once again in July as contradictory results emerged from two of Philae’s instruments. The cometary sampling and composition instrument, active immediately after Philae’s bumpy landing, detected 16 organic molecules, half of which contained nitrogen, before the lander went into hibernation.13 Methyl isocyanate and acetonitrile were among the detected molecules, but no such signatures were detected by the Ptolemy gas chromatograph and ion trap mass spectrometer.14 Researchers posited a number of theories for the discrepancy including the instruments’ positioning on the lander or that no meaningful samples could be taken as Philae ricocheted across the comet’s surface.

One thing that has become clearer over the last 12 months is the chemistry of Pluto’s atmosphere. Nasa’s New Horizons spacecraft, sent out into space nearly a decade ago, captured the first images of the dwarf planet’s 80-mile thick, red atmosphere in July 2015. Nasa believes this red hue is down to complex hydrocarbons that condense into a mist of heteropolymers known as tholins. An IR spectrometer on board New Horizons also detected frozen methane on Pluto’s surface, which Nasa suggest is primordial in nature.

A group of chemists from the Czech Republic went back to school this year to ask why alkali metals explode in water.15

Researchers began to tackle the issue of device stability head-on, with a team led by Michael Grätzel at the Ecole Polytechnique Fédérale de Lausanne (EPFL) in Switzerland highlighting how the nature of efficiency testing may be skewing results.22 Grätzel’s group, dissatisfied with the push for greater efficiencies at the cost of stability, later manufactured the first 1cm2 perovskite solar cell to be formally accredited by an independent test laboratory.23 To achieve this, the researchers, rather than modify a perovskite thin film, changed the lattice structure of the surrounding NixMg1-xO and titania charge extraction layers. Both the Ni(Mg)2+ and Ti4+ cations were replaced with Li+ and Nb5+ ions, respectively. The cell is capable of 16.2% efficiency, with a more conservative measurement of 15% being recognised by the photovoltaics testing community.

Water-splitting electrolysers have also been climbing the efficiency ladder in 2015. Such electrochemical cells may be the future of hydrogen production, but the membrane between the electrodes, used to prevent the products from mixing and causing an explosion, is costly to produce. A team led by Demetri Psaltis at the Swiss Federal Institute of Technology in Lausanne has solved this issue by creating a membrane-less electrolyser.24 Coated with catalysts that aid the evolution of hydrogen and oxygen, the electrodes are only separated by a few hundred micrometres. When the electrolyte flows between the plates, the evolving gases do not mix as lift forces push them back towards the electrodes. The team now hope to scale up the cell for commercial applications.