Vaccine raises hopes of an end to Ebola 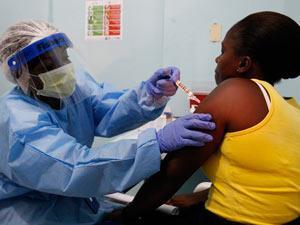 A Phase III trial for a candidate Ebola vaccine has shown extremely encouraging results in Guinea, demonstrating complete protection for all those who were vaccinated. Researchers are hopeful it will put an end to the current outbreak and help to control future epidemics.

The VSV-ZEBOV vaccine, which was developed by the Public Health Agency of Canada and has been licensed to NewLink Genetics and Merck, has so far been used to vaccinate more than 4000 close contacts of 100 Ebola patients, in a ‘ring vaccination’ strategy similar to the one used to eradicate smallpox. It is the first successful field trial of an Ebola vaccine, and the first time a recombinant vaccine for any virus has been shown to be effective.

‘This record-breaking work marks a turning point in the history of health R&D,’ said Marie-Paule Kieny, assistant director-general of the World Health Organization (WHO), one of the organisations implementing the trial together with the Guinean authorities. ‘We now know that the urgency of saving lives can accelerate R&D.’

The VSV-ZEBOV vaccine is itself a live virus, containing parts of the Zaire strain of Ebola’s protein coat. ‘It’s based on a different virus – the vesicular stomatitis virus – they simply swap out one gene for a glycoprotein and replace it with the glycoprotein for Ebola,’ says Andrew Easton, a virologist at the University of Warwick, UK, who was not involved in the trial. This lets the vaccine ‘show’ signatures of Ebola to the body’s immune system so it is primed to recognise the virus if infected.

VSV-ZEBOV was developed at Canada’s National Microbiology Lab in Winnipeg, and underwent animal trials in the early 2000s. The decision was taken to fast-track its development in 2014 in response to the Ebola outbreak in west Africa, and Phase I human trials were carried out in Kenya, Germany, Switzerland, and the US.

In the recent Phase III trial, the families and close contacts of 100 Ebola patients were given the vaccine. Half of these ‘rings’ of contacts were given the vaccine immediately after a case was discovered. The other half – a control group – were vaccinated after three weeks, the incubation period of the virus. Of those treated immediately, there were no subsequent cases of Ebola, while among those whose vaccinations were delayed, 16 people contracted the virus.

‘To achieve these sorts of results is remarkable,’ says Easton. ‘Everyone talks about wanting [100% efficacy], but it’s very unusual to achieve it, particularly on the first attempt.’ Using ring vaccination as part of the trial design – another first – was a ‘smart move’, he adds. ‘It has allowed the trial to be carried out incredibly quickly.’

Crucially, the vaccine appears to be safe for human use. ‘They gave it to thousands of people and there was only one adverse event,’ says Ben Neuman, a virologist at the University of Reading, UK. ‘That’s really great for a live vaccine.’

Despite these encouraging interim results, further tests will need. ‘What we want to know now is how long that immunity lasts … that will inform, ultimately, how [the vaccine] might be deployed,’ says Easton. ‘And there has to be a much fuller assessment of any risk factors.’

Médecins Sans Frontières (MSF), one of the organisations involved in the trial, said vaccination programmes of frontline workers should now begin. ‘More data is needed to tell us how efficacious this preventive tool actually is, but this is a unique breakthrough,’ said MSF’s medical director Bertrand Draguez. ‘We should definitely make this vaccine available to at-risk groups as soon as possible.’

More in the pipeline

There are other experimental Ebola vaccines at a similar stage. A vaccine candidate developed by the US National Institute of Allergy and Infectious Diseases and GlaxoSmithKline – which contains DNA from the Sudan and Zaire strains of Ebola, but no live virus – has been shown to be safe in humans and is currently undergoing Phase III trials in Liberia. This could be used to vaccinate vulnerable groups for whom a live vaccine would be too risky, such as pregnant women and children. Another live vaccine developed by Johnson & Johnson, meanwhile, is in Phase II trials, although this may ultimately prove unnecessary given the success of VSV-ZEBOV.

The need for effective vaccines was highlighted in a roadmap released by the UK’s Wellcome Trust in 2014. It is hoped that the output from rapid development efforts will help to prevent future epidemics spiralling out of control, as well as helping to improve the current situation.

There are signs the current outbreak is now in its dying phases – just two new cases were reported last week according to the WHO. And in recent months, the majority of new cases have come from known cases, where patients have passed the disease on to relatives or contacts. ‘In a situation like that they’ve basically got the virus under control but it’s still spreading a little bit,’ says Neuman. ‘A vaccine would be able to stamp that out completely.’