Every chemist knows the Diels-Alder reaction, which produces a new ring of six carbon atoms without adding or removing any atoms, just by juggling six electrons. Now, scientists have achieved the difficult feat of carrying out the reaction on a surface and imaging each stage as it happens.1 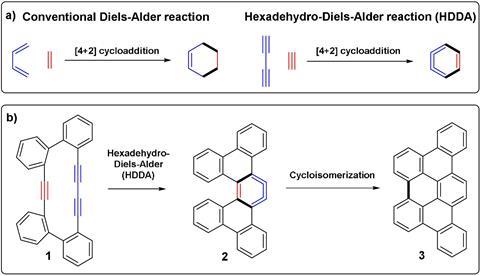 The elementary version of the Diels-Alder, with a conjugated diene and an alkene or alkyne carrying few if any additional molecular groups, is one of the most studied in history. However, it has never been carried out on a surface. Therefore, nobody has been able to observe it directly using scanning probe microscopies.

To try this, the groups of Diego Peña at the University of Santiago de Compostela, Spain, and Leo Gross at IBM Research Zurich, Switzerland, have had to resort to a much more complicated version of this simple reaction. Instead of three double bonds doing the circular swap, they went for three triple bonds – a hexa-dehydro Diels-Alder reaction – which has the advantage of producing a flat and very reactive product, an aryne.

To be sure that both reactants would be in the right place, they chose a setup where they are already part of the same molecule. ‘This molecule in particular was first studied in solution by [Yoshito] Tobe and co-workers2 some years ago,’ explains Peña. ‘Therefore, we were quite confident it would work on a surface.’

‘We demonstrated that this molecule undergoes a Diels-Alder reaction on the surface by thermal annealing,’ adds Gross. In this protocol, the molecule bound to the surface in high vacuum and low temperature is warmed up to a higher temperature where it gets the chance to react, then cooled again to be studied by scanning probe microscopy.

Praising the experimental design, Harry Anderson from the University of Oxford points out: ‘A clever aspect of this work was to find a molecule in which the intramolecular Diels-Alder reaction is accelerated by strain, but which is stable enough to be sublimed onto a surface without triggering the reaction.’

The researchers were able to dissect several intermediates and reaction steps in the path following on from the reactive aryne, which is useful for the field of surface and atom manipulation chemistry. For the many fans of the simplicity of the classical Diels-Alder reaction, however, it does not yet provide a window into its workings.

‘While this paper is an important step towards using the Diels-Alder reaction in on-surface synthesis, it remains to be seen how a normal Diels-Alder reaction between two different molecules could be performed on a surface,’ comments Michael Gottfried from the University of Marburg, Germany.

To observe reactions in real-time time, Peña and Gross have now teamed up with Jascha Repp at the University of Regensburg, Germany. ‘For this goal the reaction should be triggered by atom manipulation and it should be reversible,’ says Gross. ‘Surely the Diels-Alder reaction will be a tough one, we will not start with that.’