Process could aid discovery of materials that exploit specific protein functions, such as drug molecules or biocatalysts

US researchers have used DNA to guide how proteins are packed into single crystals. The technique revealed three new protein crystal arrangements, demonstrating how it could aid the discovery of new structures for engineering materials that exploit highly specific protein functions, such as drug molecules or biocatalysts.

Proteins are complex and dynamic macromolecules that are difficult to coerce into single, atomically-ordered crystals. However, protein crystals are necessary to understand protein structure and function.

The problem is that the interactions between patches of protein surfaces that usually drive crystallisation are weak, complex, non-covalent and lack specificity. This makes it difficult for researchers to predict and control the crystallisation process as well as the type of crystals that are formed.

To solve this, Chad Mirkin’s lab at Northwestern University has used DNA to drive protein crystallisation instead of normal protein–protein interactions via designable and simple interactions with protein surfaces. The advantage of DNA interactions are that their strength, length and specificity can be programmed and predicted via base pairs of the genetic alphabet: A with T and C with G.

‘Protein crystallisation is much like trying to build Ikea furniture without the instruction manual,’ explains Mirkin. ‘Pieces must fit perfectly together in order to be stable, but without guidance it is difficult to know which pieces should go where or if you even end up with the correct final structure.’ By using DNA, Mirkin’s approach provides information, akin to an instruction manual, that guides proteins into specific positions in a controlled way. 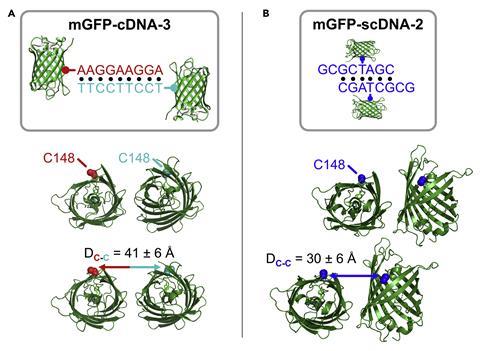 The researchers tested the technique using a model green fluorescent protein. This was made into two mutant versions that possessed a residue of the amino acid cysteine at a distinct surface location in each mutant. This meant that engineered DNA strands could latch onto the cysteine and interact with the proteins.

Several DNA strands were tested that varied in sequence, length and position, demonstrating that the proteins’ arrangement within single crystals was altered differently depending on the DNA design compared with known crystal structures of the protein. What’s more, the team discovered three unique crystal structures.

‘We were surprised that even small changes to the design of the DNA – for example, changing the length of DNA interaction from six base pairs to nine base pairs – changed the way that proteins pack into crystals,’ says Mirkin. ‘This is unexpected, because this change in DNA is relatively small compared to the size of the protein and shows how sensitive protein crystallisation is to this kind of intervention.’

‘The design of specific DNA interactions that dial in a programmable crystal packing gives an elegant solution to the challenges implicit in crystallising proteins,’ comments Sarah Bowman, who investigates biomolecule crystallisation at the Hauptman-Woodward Medical Research Institute in Buffalo, US. ‘It will be interesting to see how this technique can be amended for use in other non-model protein systems.’