New suitcase-shaped DNA nanostructures may hold promise for drug delivery. The team behind these ‘nanosuitcases’ showed they can encapsulate drugs, carry them, and deliver them to target cells. They were also designed to be specific, and only release their cargo when triggered by target mRNA or miRNA sequence that can be added on-demand. 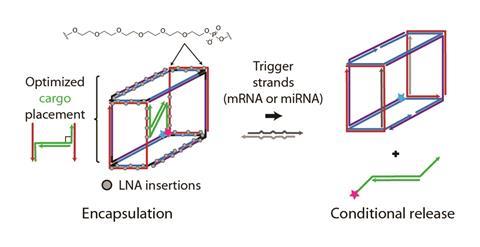 The nanosuitcases are the first DNA nanostructures capable of conditionally delivering small molecule and oligonucleotide-based drugs. They were assembled using DNA origami techniques by a group of researchers led by Hanadi Sleiman at McGill University in Canada.

Sleiman and her team first prepared a series of six DNA strands and mixed them, one ‘edge’ at a time, to form the suitcases. Once they isolated the empty boxes, they filled them with the cargo: short sequences of nucleotides that show potential for gene therapy. As ‘packed’ suitcases are heavier than empty ones, they can be easily separated using gel electrophoresis. The team showed the efficiency of the suitcases delivering a series of fluorescent cargos to a line of tumour cells. They also hope the specificity of the structures, which can be programmed to recognise different genetic markers, could eventually allow them to be engineered to tell healthy and cancerous cells apart.