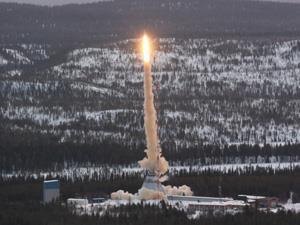 DNA can survive the extreme conditions of sub-orbital spaceflight and re-entry. The discovery gives a boost to the idea of panspermia – that life was delivered to Earth on the back of a meteorite or comet – but DNA’s hardiness could also confuse scientists’ search for genetic material in samples gathered by planetary probes, thanks to terrestrial contamination.

In 2011, scientists at the University of Zurich, Switzerland stuck synthetic plasmid DNA to the exterior of the TEXUS-49 research rocket launched near Kiruna, Sweden. Over the 780 second sub-orbital flight the DNA, containing a fluorescent protein and an antibiotic resistance gene, experienced temperatures of more than 1000°C and microgravity for 300 seconds.

After landing, the areas where DNA was affixed were swabbed with Tris buffer. The samples were then analysed using gel electrophoresis to see whether any DNA had survived the stress of re-entry and, if any had, was any of it still viable. More than half of the DNA was recovered from a number of sites around the rocket’s exterior. At best just over a third of the DNA was still viable and could transfer antibiotic resistance to bacteria.