As the five-year anniversary of the worst oil spill in US history passes, many important questions remain unanswered. The ecological damage caused by the spill is still being quantified and the effects of the widespread use of dispersants are still hotly debated. But despite the vast amount of oil spilled into the Gulf of Mexico, there are hopeful signs that the region’s ecosystem is bouncing back from the disaster.

The BP Deepwater Horizon oil rig exploded off the coast of Louisiana on 20 April 2010, killing 11 workers and releasing millions of barrels of oil into the Gulf of Mexico. An underwater camera soon revealed that huge billows of black oil were surging out of the well more than 1.5km under the surface of the water. 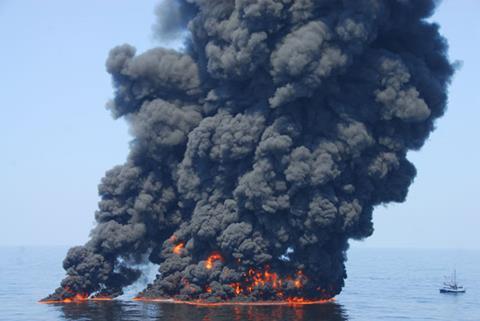 It took over 87 days to cap the Macondo well, and once the well was plugged the US government estimated that 4.2 million barrels of oil had leaked into the Gulf of Mexico. By contrast, BP put the figure at around 2.45 million barrels. The oil spill was more than 10 times the size of the Exxon Valdez disaster of 1989 in Alaska, which was the worst spill in the US’s history at that time.

Scientists and environmentalists were worried by more than just the problems that oil slicks might cause to the delicate Gulf ecosystem. Crude oil contains more than 70,000 different compounds with polycyclic aromatic hydrocarbons (PAHs) of most concern as some members of this class of compounds are toxic or even carcinogenic. Many of the lighter compounds in oil – like benzene, methylbenzene, ethylbenzene and xylene – are also toxic. However, these so-called BTX compounds tend to weather very quickly out of the oil, so experts believe that their effects didn’t persist for long after the spill.

In addition, efforts to burn off the crude oil sitting on the surface of the Gulf are known to have formed compounds that can be extremely toxic. In September 2014, a US judge ruled  that BP was grossly negligent and faced potential fines of up to $18 billion (£12 billion). The same judge more recently ruled that a total of 3.19 million barrels of oil had been spilled and, as a result, BP faces significantly smaller fines.

Such a large oil spill in such deep water was completely unprecedented. In its immediate aftermath, researchers saw animals coated with oil, some dead, some recovering and others suffering sub-lethal chronic effects. Scientists from many fields joined environmentalists making apocalyptic warnings about the severity of the ecological disaster unfolding.

Christopher Reddy, a senior scientist at Woods Hole Oceanographic Institution in Massachusetts, says the doomsday scenarios were being thrown around too hastily. ‘I was sceptical. I didn’t have an opinion because I didn’t have any data,’ states Reddy. ‘I was disappointed with a lot of folks who were making rather incredibly inaccurate and unsupported conclusions about the outcome of the spill,’ he tells Chemistry World.

‘Mother Nature is a fantastic chemist and can be quite resilient, so to make those types of predictions without any data … how can you support those conclusions?’ Reddy asks.

Erik Cordes, an associate professor at Temple University in Pennsylvania, US, who specialises in deep sea corals and natural oil seeps, says his immediate assumption was that the oil would float. ‘I didn’t expect that there would be as significant an impact in the deep sea as researchers have ended up discovering.’ Within the first few months, Cordes’ bubble was burst when various scientific observations indicated substantial oil on the deep sea floor.

‘Once we realised that a lot of this was ending up in the deep sea, then the magnitude of the problem started to hit home,’ he recalls. Cordes says the immediate concern had been to prevent the oil from washing ashore. But it turned out that the problem was deeper, literally. 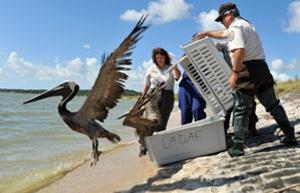 In fact, a lot of the oil that was discharged settled on the seafloor, suffocating and significantly damaging creatures down there like deep water corals. The furthest deep sea coral affected by the oil spill was 22km away from Deepwater Horizon, Cordes notes. He says that this distance is a minimum radius, and adds it is likely that the oil travelled even further. Corals that were damaged then continue to die today. They only grow a centimetre or two per year, so these vital fisheries habitats are unlikely to recover for hundreds of years.

University of Southern Florida fisheries biologist Steve Murawski points out that burrowing fish still have quite high levels of contamination. He believes that this is because they are continually interacting with the contaminated sediment. By contrast, fish that swim in waters nearer to the surface, like king mackerel and tuna, have fared much better, according to Murawski. He says these observations illustrate just how much oil still remains on the bottom of the deep sea.

Recent research by Florida State University oceanographer Jeff Chanton has found that 27 million to 45 million litres of oil-derived carbon remain buried in the sediment on the Gulf floor. ‘This is going to affect the Gulf for years to come,’ Chanton said in a statement. ‘Fish will likely ingest contaminants because worms ingest the sediment, and fish eat the worms. It’s a conduit for contamination into the food web,’ he added. Chanton noted that with less oxygen on the sea bed it is more difficult for bacteria to break it down than it is further up the water column.

Beyond questions over what is lying on the sea bed, researchers have observed the impact that the spill has had on other animals. Murawski points to a decline in the growth rates of some reef fish species, like the red snapper, in 2010 and 2011. He also says these fish had a much higher incidence of skin lesions than was seen prior to the disaster. Murawski also cites several studies highlighting the unusual number of bottlenose dolphin deaths in the Gulf, which began in February 2010 but worsened following the spill. He says the vets that looked at these animals saw symptoms of exposure to toxic chemicals, including changes in their blood chemistry and ability to fight off infection. But because there was clearly a stressor before the oil spill, the actual cause of the dolphin deaths remains unclear.

Because so many questions linger, researchers are pushing for more information about the baseline contamination in the Gulf of Mexico, and some put the onus on the oil companies. The last large study on this topic was in 1992, according to Murawski. He wants oil companies to be compelled to provide baseline data on the sediments, water and the biota in the vicinity of each of their existing and proposed facilities. Making such data public would provide an environmental baseline for scientists to measure the incremental impacts of future oil spills.

One of the most contentious topics in the story of the Deepwater disaster is the use of more than a million gallons of Corexit oil dispersant, 800,000 of which used were directly at the wellhead. New research by Cordes and his team indicates that even at similar concentrations to the oil, the dispersants alone are more toxic to corals than the oil by itself. 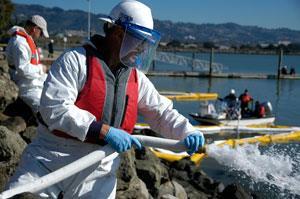 While oil contains toxic compounds, dispersants by themselves are seen as relatively benign. However, some believe the combination of both was worse than the oil alone. ‘The dispersants open cell walls to be more permeable to toxic chemicals in the oil, so what we have seen in many studies that have come out is that the two together are much more toxic than the individual components,’ Murawski states.

Researchers at the University of Alabama at Birmingham, US, published work in April suggesting that the oil dispersant used might harm the epithelial cells in the lungs of humans and marine life.

Many experts say it’s not clear that the unprecedented use of dispersants in the Deepwater case offered any benefits. They say this issue needs more discussion and they underscore the importance of revisiting dispersant use and looking for alternative dispersants that may be less toxic.

However, Reddy and others suggest that the real question is not if dispersants caused any harm, but whether their use prevented greater damage. They say the destruction from Deepwater would have been much greater if more oil had reached the shoreline rather than being dispersed offshore. ‘The amount of biological activity in the open ocean is so much lower than the amount of biological activity in the coastal marshes,’ Louisiana State University professor emeritus Ed Overton, an environmental chemist. ‘It looks like that impact is less offshore than if that oil would come onshore in the coastal marshes.’

Also controversial is BP’s conclusion in a 16 March report that the Gulf of Mexico and coastal shoreline environments have rebounded from the effects of the disaster. BP concluded that in the vast majority of the areas it investigated there was no evidence of ecological damage from oil or dispersants. 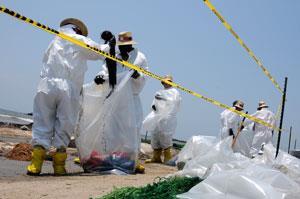 Scientists agree the environment has rebounded quickly after the disaster, but BP's report has proved controversial

According to BP, the few areas that were exposed to harmful levels of oil or dispersants were ‘limited in space and time’, mostly in the area very close to the wellhead during the spring and summer of 2010. The company said publicly available data reveal that fewer than 2% of the more than 8000 sediment samples collected exceeded the US Environmental Protection Agency’s sediment toxicity benchmark for aquatic life. BP also pointed to another analysis of more than 4000 sediment samples which revealed that more than 90% had no detectable dispersant markers.

But BP’s report was quickly attacked. The Deepwater Horizon oil spill Natural Resource Damage Assessment Trustees – the council of government and state representatives responsible for studying the effects of the spill – immediately called the company’s conclusions ‘inappropriate’ and ‘premature’.

‘Citing scientific studies conducted by experts from around the Gulf, as well as this council, BP misinterprets and misapplies data while ignoring published literature that doesn’t support its claims,’ the Trustees wrote.

Many researchers in the field are similarly critical. ‘They were looking for the bits of information that supported the things that they wanted to say, and ignored a lot of the research that is out there that indicates that the deep sea is going to be decades or centuries away from recovery,’ Cordes says.

But key scientists do agree that the environment has rebounded quickly. ‘We are almost to the spot where you can’t detect significant impacts right now,’ Overton states. ‘There was plenty of damage, but our environment is recovering.’

The slim silver lining to the catastrophe is that the science analysing oil spills has been advanced tremendously. ‘We are certainly preparing and training a much larger contingent who will be available to contribute during the next spill,’ Reddy tells Chemistry World.

Through the $500 million that BP has contributed to the Gulf Mexico of Research Initiative, for example, the company is training a much more well-informed, diverse group to study future oil spills. The terrible accident has also brought into focus what information needs to be developed to conduct better science in this field.

Correction: This article was updated on 20 May to reflect the fact that Chanton’s research paper described finding carbon from oil, rather than oil itself on the sea floor.