Explainer: why have bioorthogonal and click chemistry won the 2022 Nobel prize?

Carolyn Bertozzi, Morten Meldal and Barry Sharpless have won the 2022 Nobel prize in chemistry – find out why

What won this year’s prize?

The 2022 Nobel prize in chemistry is all about a particular type of reaction that can join molecules together quickly and predictably, and which is so precise it can even be used to perform chemical reactions safely inside living cells.

It’s called click chemistry – a concept that describes reactions which are ‘ideal’: highly selective, high yielding and that work with many different types of substrates. The reactions are generally able to be carried out in the presence of other competitor molecules and can even take place in water.

Bioorthogonal chemistry is a field in which click reactions are used to carry out chemical transformations inside biological cells. The technique offers a new way to study the natural processes taking place in cells and might even provide new ways to deliver drug molecules to specific cells with incredible levels of precision.

Who are the laureates and what did they do?

Morten Meldal from the University of Copenhagen, Denmark, and Barry Sharpless of the Scripps Institute in California, US, laid the foundations of click chemistry. Sharpless was the first to introduce the concept of click chemistry when he envisaged the idea of a streamlined synthetic process. He wanted to be able to build up complex molecules using a few highly efficient reactions in a modular approach. When he first wrote about the idea, he explained that the goal was ‘to develop an expanding set of powerful, selective, and modular “blocks” that work reliably in both small- and large-scale applications’.

Sharpless and Meldal then independently discovered the first example of a click reaction that has since become synonymous with the concept: the copper-catalysed azide-alkyne cycloaddition. 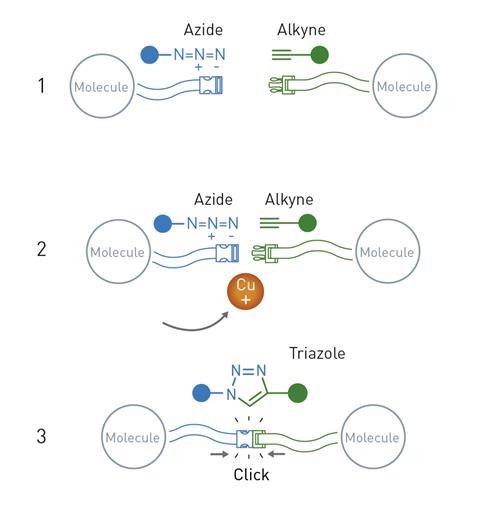 The copper-catalysed alkyne–azide cycloaddition was the first click reaction, discovered by Sharpless and Meldal independently of each other

Carolyn Bertozzi, based at Stanford University, built on the principles of click chemistry but took it to a whole new level by using the reactions inside living cells. While most chemists perform their experiments in carefully controlled conditions – perhaps in a flask under an inert atmosphere and with no other chemicals around to interfere with the process – Bertozzi took up the challenge of carrying out chemistry inside the biochemical soup of a cell where all manner of molecules and functional groups can potentially interfere with the reaction.

Her team has developed new click reactions, including copper-free versions, that avoid toxic side-reactions associated with the original click chemistry. These techniques are allowing researchers to study aspects of biochemistry that were previously inaccessible like processes involving the sugars attached to proteins. This work offers new understanding of biochemical processes, for example the molecular mechanisms that explain how viruses infect cells.

One of those names sounds familiar…

All three of these chemists are huge names in their fields, but Sharpless also joins an exclusive band of scientists that have won two Nobel prizes. He won his first Nobel prize in 2001 for work on chirally catalysed oxidation reactions and has now become only the fifth person to win a second Nobel prize.

Other two-time winners include John Bardeen (both in physics), Marie Curie (physics and chemistry) and Linus Pauling (chemistry and peace). Frederick Sanger is the only other person to have won two Nobel prizes in chemistry.

His favourite molecule is water.

While the click chemistry concept could be applied to many different chemical reactions, the copper-catalysed azide­–alkyne cycloaddition is probably the most important example. In this process, molecules containing a highly reactive azide group are reacted with alkynes in the presence of copper ion catalysts. The azide and alkyne ‘click’ together to make a single product molecule featuring a newly formed triazole group.

The new copper-catalysed approach to making them drew intense interest due to the fact that it avoided the formation of unwanted byproducts, which had been a major issue with previous methods It also works on molecules containing a huge range of functional groups and can be carried out in water – avoiding the need for environmentally harmful organic solvents. These features of the click reaction meant that chemists could now connect together simple molecular building blocks with a straightforward and reliable reaction.

In the 1990s Bertozzi was studying glycans – carbohydrate molecules found on the surface of proteins and biological cells. These play crucial roles in many biochemical processes, but due to their complex branched structures and variable stereochemistries, techniques for identifying and handling glycans had lagged behind those used for studying other biomolecules like DNA and proteins.

Bertozzi wanted to attach fluorescent molecules to the glycans to make them easier to map. Key to this working was finding a suitable chemical reaction that wouldn’t interact with the other biochemical material inside a cell – an idea she called bioorthogonal chemistry.

Her early efforts involved using azides to attach fluorescent molecules to glycans, and as reports of the new click chemistry – that was so tolerant of different chemical environments – began to appear in the early 2000s, Bertozzi realised that these might be exactly the reactions she was looking for.

One problem with the initial copper-catalysed reactions is that copper ions are toxic, and can catalyse other unwanted reactions inside biological cells. Bertozzi realised that if an alkyne can be forced into a highly strained ring shape, its reaction with an azide would be so rapid that no copper catalyst would be needed. Her strain-promoted alkyne azide cycloaddition was first published in 2004 and opened up the doors to a host of bioorthogonal chemistry that has provided new understanding of how biomolecules interact in cells and how diseases develop on the molecular level. 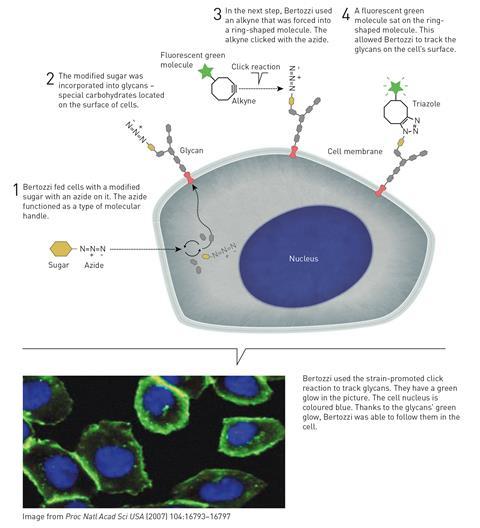 So what comes next?

The field of click chemistry has exploded since Sharpless first introduced the concept – over 1000 papers are published annually that reference the technique and hundreds of structures are deposited in the CCDC every year that contain triazole moieties (up from just a handful in the early 2000s).  Sharpless himself even reported a new click chemistry variant this week. These have contributed to a burgeoning field that offers chemists new ways to make all sorts of new materials with useful properties. For example, by adding an azide to a material of interest, other alkyne-containing molecules that capture light or conduct electricity can be clicked into place.

In the growing area of bioorthogonal chemistry, researchers have used click reactions to study all sorts of biochemistries. For example, they have been used to modify nucleotides and add unnatural amino acids into proteins or to connect together nucleosides to produce synthetic DNA.

Click chemistry could also have therapeutic applications. For example, Bertozzi’s group has shown that some glycans interfere with the body’s attempts to attack certain cancer tumours. Based on these insights her team has developed a way to attach glycan-specific antibodies onto enzymes that attack the glycans – a pharmaceutical based on this concept currently being tested in clinical trials.