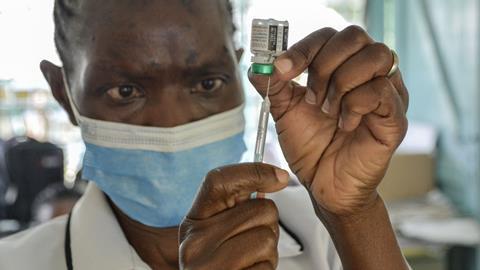 The World Health Organization (WHO) has recommended the first ever malaria vaccine for widespread use in children. Malaria causes more than 260,000 deaths in children aged under five in Africa every year.

This GlaxoSmithKline (GSK) RTS,S/AS01 (Mosquirix) vaccine prevents 39% of malaria cases and 30% of severe malaria cases in young children. It is recommended for children living in areas with moderate to high transmission of the malaria parasite Plasmodium falciparum.

Malaria is difficult to develop a vaccine for as it is caused by a protozoa that shape shifts as it moves from mosquito to human, on to the host’s liver and then blood cells. The development of Mosquirix began in the 1980s, after the discovery of the protein (CSP) on the outside of the parasite form carried by mosquitoes.

RTS,S showed promise in a 1996 US challenge study, which involved volunteers being bitten by mosquitoes. A large phase 3 trial in Africa followed in 2009 and reported positive results in 2015 in 15,000 children 17 months to five years old. Now, a comprehensive study of 800,000 children in three African countries shows it is safe with 30 to 40% efficacy.

‘This is an imperfect vaccine, but really it is the one that’s working at the moment,’ says Samuel Wassmer, a malaria researcher at the London School of Hygiene & Tropical Medicine. ‘Lots of vaccine strategies have been explored, but none have been very successful, mainly because the parasite that causes malaria has a complex life cycle and is mostly hidden inside our cells.’ 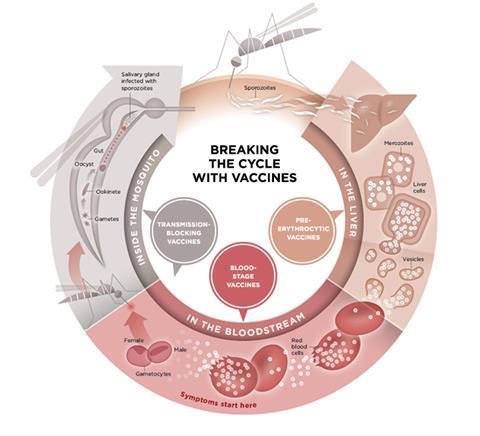 Mosquirix induces high levels of antibodies against CSP. These antibodies must snag almost all parasites before they infect liver cells. ‘You need lots of antibodies to make the vaccine work,’ says vaccinologist Adrian Hill from the Jenner Institute in Oxford. The vaccine triggers high antibody titres partly through an adjuvant, AS01, that boosts the immune response. There are some concerns about whether enough of the adjuvant can be supplied, however, as part of it is a natural saponin extracted from tree bark.

Four shots are also needed making compliance more tricky. ‘Within six to 12 months the antibody levels come down a long way, 80 to 90%,’ says Hill, making boosters necessary. This poses some logistical challenges, but also adds to production requirements. GSK has promised to donate 10 million doses of Mosquirix for use in pilots, and up to 15 million doses each year after that. To date, more than 2.3 million doses have been administered in Ghana, Kenya and Malawi.

The efficacy of the Mosquirix vaccine is modest, experts agree. ‘It is only really useful in combination with numerous other malaria controls,’ says Stefan Kappe, an infectious disease researcher at Seattle Children’s Research Institute, US. This includes insecticides and bed nets to protect children from mosquitoes, as well as drugs.

A recent study randomly assigned 6861 children aged 17 months to five years to malaria drugs (sulfadoxine–pyrimethamine and amodiaquine) alone; Mosquirix alone; or to both the drugs and the vaccine. The combination reduced malaria cases in treated children by 60%, and hospitalisations and deaths by approximately 70% compared with the other interventions. ‘If you deploy this vaccine with all the tools we have, then you can make a difference,’ says Wassmer. ‘Its positive effects really shine when used in combination.’

Most of the Mosquirix vaccine consists of hepatitis B antigen, which acts as a carrier for CSP. In an effort to make an improved vaccine, Hill’s team genetically engineered a yeast strain to make the antigen carry more CSP, directing the immune response almost wholly against the malarial protein. This R21 vaccine entered clinical trials in Africa in 2019.

Earlier this year, R21 achieved 77% efficacy over 12 months in a phase 2 trial of 450 children in Burkina Faso. A phase 3 trial began in April and will complete enrolment his year, says Hill, with data due in 2022.

Another vaccine strategy is to induce immune memory cells that will kill infected liver cells. Hill has had some success here using two viral vectors: a chimp adenovirus vector, used in the Oxford–AstraZeneca Covid-19 vaccine, and a modified vaccinia Ankara (MVA) virus. But his focus for now is on R21.

His colleague Simon Draper at the University of Oxford, meanwhile, is concentrating on the blood life stage of the parasite. This year his group showed reduced blood-stage malaria growth in a UK clinical trial of healthy adults who were vaccinated against a blood-stage protein. Hill says ‘we plan to put that with R21 in a vaccine mixture in the coming year and start trials in west Africa’.

Yet another approach is to inject living Plasmodium falciparum parasites. Earlier this year, volunteers were given aseptic parasites and challenged with parasites three months later. This was reported to protect 87.5% of volunteers infected with the same Plasmodium species as the vaccine, and 77.8% of those infected with a different species. A field trial is underway in Mali.

And Patrick Duffy at the National Institutes of Health is inducing antibodies that target the parasite at the sexual-stage of its life cycle as it passes to mosquitoes. This would not protect the person vaccinated, but instead reduce transmission. Duffy recently reported on the use of a parasite protein in monkeys to block transmission in this way. This approach could form part of a regional scheme to eradicate the parasite.

After a long road, the WHO announcement on the world’s first malaria vaccine – with others in the pipeline – has comes as a relief for health researchers. ‘It should make it easier for other vaccines coming along,’ says Hill. ‘And having multiple vaccines against malaria would be a great position to be in.’