First radial-conjugated aromatic that does the twist

Chemists have made the first twisted aromatic compound with radially conjugated π-electron system. Its π-orbitals are oriented within the plane of the molecule, like the spokes of a wheel. 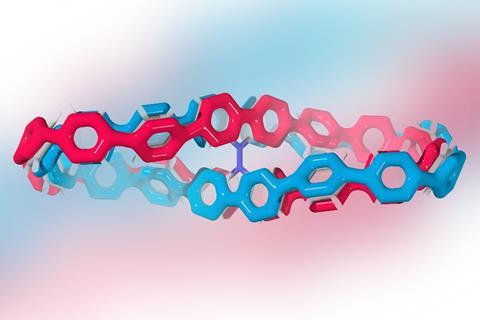 The molecule comprises a ribbon of aromatic rings, locked into a figure-of-eight shape using a central 9,9’-bicarbazole

Since August Kekulé proposed benzene’s structure in 1865, aromaticity has fascinated chemists. They have twisted and turned it into unusual shapes, created dual and double aromatic compounds. Most of these structures, however, are planar aromatics, meaning their π orbitals lie parallel to the plane of the ring. Some tubular molecules – like carbon nanobelts – show a more unusual form of radial aromaticity, in which the π-electron system lies within the overall plane of the ring structure. 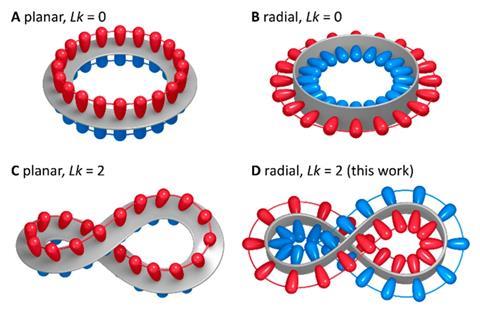 The twisted aromatic was made in a three-step process from bicarbazole and a U-shaped 1,4-cyclohexadiene building block that Carolyn Bertozzi’s team introduced for synthesising the first carbon nanohoops.A team from Poland, Spain and France has created the first radially conjugated aromatic system with a double half-twist. The molecule consists of 12 benzene rings and one 9,9’-bicarbazole that bends the structure into a strained figure-of-eight.

Since the central bicarbazole makes the molecule chiral, the researchers could separate the compound’s enantiomers by supercritical fluid chromatography. Although the enantiomers were stable at room temperature, they decomposed at elevated temperatures. But calculations suggested that the compound is unlikely to racemise, making it an interesting candidate for materials chemistry.