Football-sized fullerene gets an electric response 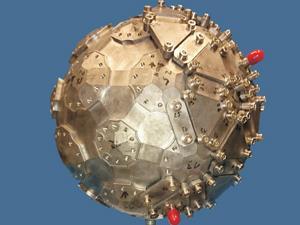 A football-sized resonator that can simulate the properties of a carbon fullerene has been created by scientists in Germany. The device will help researchers to understand the relationship between the famed buckyball’s geometry and its electrical properties.

Since its discovery by Harold Kroto, Robert Curl and Richard Smalley, who shared the 1996 Nobel prize in chemistry, buckminsterfullerene, a hollow carbon sphere, has opened up a field of chemistry devoted to the study of exotic carbon allotropes. But scientists have not been able to get the ball rolling on their commercial applications, with only a handful of biomedical and electrical techniques using the C60 molecule surfacing since the 1980s.

Barbara Dietz and her colleagues at the Technical University of Darmstadt have now successfully created a lead-coated fullerene billiard ball 16cm in diameter. The ball can superconduct when it is placed in a liquid helium cryostat as the lead coating acts as an efficient superconductor at temperatures below 7K.

The team also placed cavities at each of the 60 vertices where the carbon atoms would normally sit, which enables the macroscale fullerene to act as a microwave resonator. By measuring the ball’s resonant frequencies, the researchers were able to match the electrical properties of a carbon fullerene with its geometric shape.